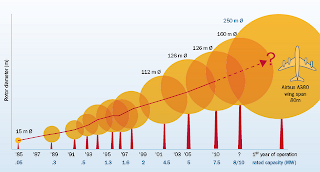 The awesome emergence of giantism in the windmill business is continuing and is plausibly approaching real physical limits. I just never thought that a thousand foot diameter was ever in the cards.

Bigger has turned out to be better with this technology and it may even turn out to be far easier on then birds as the blade speed will be much lower. I suspect that is already true for the larger machines.

You will also note that compressed air is coming into its own also as a simple storage medium that also responds well to large scale engineering or giantism. They even envisage storing energy for months which is really handy as the energy can then be sold during periods of peak price.

Large wind farms need only one large storage device to service the entire wind farm and this could be also be the step that allows the farm to control access to market. This would naturally hugely increase the revenue availability.

What is amazing to watch is that when I began following the energy industry five years ago, it was painfully clear that the industry had to make a major transition that would accelerate as EV's came into the market. The fact is that it is happening apace and that the wind industry continues to surprise while employing armies.

Solving the energy storage aspect with compressed air pretty well ensures wind power will be with us for a long time as a truly sustainable supply that is actually superior to damming.

http://nextbigfuture.com/2012/06/800-foot-tall-wind-turbines-are.html
Environmental Science and Technology - Wind Power Electricity: The Bigger the Turbine, The Greener the Electricity? The average size of commercial turbines has grown 10-fold in the last 30 years, from diameters of 50 feet in 1980 to nearly 500 feet today. On the horizon: super-giant turbines approaching 1,000 feet in diameter. For every cumulative production doubling, the global warming potential per kWh was reduced by 14%.

Wind energy is a fast-growing and promising renewable energy source. The investment costs of wind turbines have decreased over the years, making wind energy economically competitive to conventionally produced electricity. Size scaling in the form of a power law, experience curves and progress rates are used to estimate the cost development of ever-larger turbines. In life cycle assessment, scaling and progress rates are seldom applied to estimate the environmental impacts of wind energy. This study quantifies whether the trend toward larger turbines affects the environmental profile of the generated electricity. Previously published life cycle inventories were combined with an engineering-based scaling approach as well as European wind power statistics. The results showed that the larger the turbine is, the greener the electricity becomes. This effect was caused by pure size effects of the turbine (micro level) as well as learning and experience with the technology over time (macro level). The environmental progress rate was 86%, indicating that for every cumulative production doubling, the global warming potential per kWh was reduced by 14%. The parameters, hub height and rotor diameter were identified as Environmental Key Performance Indicators that can be used to estimate the environmental impacts for a generic turbine. 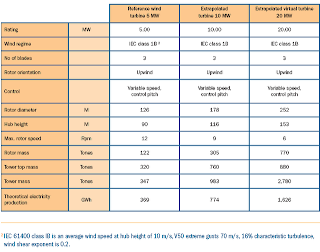 Europe Upwind project has redesigned the turbines and the blades and structure for wind turbines for an economical and feasible design for 20 megawatt wind turbines by 2020. (108 pages


A new turbine design has been developed from work by the pan-European Upwind research project funded by the European Union. The aim of the research was to examine the technical feasibility of building larger turbines that offer increased capacity and so boost renewable energy production. The proposed turbines would have revolving blades with a 800ft diameter and a capacity of 20 megawatts (Mw) compared to the 3Mw of most wind turbines. Currently, the world’s largest wind turbine is manufactured by Enercon and produces 7.5Mw.


UpWind demonstrated that advanced blade designs could alleviate loads by 10%, by using more flexible materials and fore-bending the blades (WP2).

The UpWind project demonstrated that individual pitching of the blades could lower fatigue loads by 20-30%.


There is a more radical design which could enable even larger and more efficient wind turbines.
The industry has converged on a consensus that large wind turbines should be three-bladed, horizontal-axis machines on top of a tubular tower. This is good up to 150 meters in diameter.

Prof Garvey turbine is dramatically different: a horizontal-axis machine with eight blades — four long and four short. A floating framework replaces the tower, and it converts wind power internally within the blades. Think of a bicycle wheel rotating slowly, and a loose bead on each spoke. The beads represent pistons travelling back and forth inside tubes in the blades, compressing air as they do so.

The baby of the family is a 200 meter-diameter machine producing 18MW in a decent wind and costing less than 40% of the 40 million pounds you’d spend on a corresponding set of direct-generating machines. Her big sisters might easily reach 400 meter in diameter and could be 50% more cost-effective.

An integrated compressed air renewable energy system is defined here as one which harvests renewable energy directly in the form of compressed air and later converts that to the form of electrical power for transmission. There are two main motivations for considering such systems: firstly the lifetime cost per kW h exported has the potential to be substantially lower than the lifetime cost per kW h of a system generating electricity directly. Secondly these systems offer the intrinsic capability to store large amounts of energy in a very cost effective way. The only marginal costs associated with energy storage are those connected with providing some means for storing the compressed air and some means for managing heat. This paper describes an approach to simulating the performance of such systems including a controller to determine how much power to generate at a given time and it explains an appropriate rationale for the design of that controller. The simulations conducted indicate three remarkable performance measures. Specifically: (a) the marginal loss of energy associated with passing some energy through storage may be below 15% even with energy residency times in the order of months, (b) the marginal increase in total output electrical energy arising from integrating some solar heat capture can be as high as 60% of the captured solar heat for solar heat inputs up to 5% of total mechanical power and (c) the average value of the total power output may easily be raised by over 30% if power values continue to fluctuate at rates exhibited today and if the capacity for expansion-generation matches the peak input power of the primary (mechanical) energy harvesters.