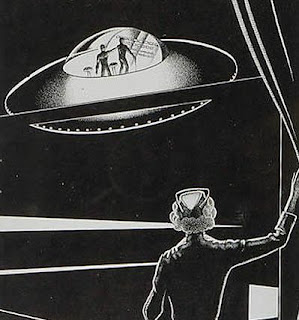 I try not to post UFO reports if only because there is no end of them and rarely add something new.  I presently came across this report from forty years ago that got little enough coverage anyway but came from  a respected local paper that played it exactly as they got the story.  The witness credibility could hardly be better and was immediately confirmed by her fellow nurses.

The data is important.  This is clearly a magnetic field exclusion vessel whose nature I have described before.  Google ‘MFEV’ on this blog.  Everything conforms to other close encounters as far as the craft is concerned.

Way more important is that the witness saw at close range two individuals that had to be human beings or so close as to be indistinguishable.  Out hands are unique in terms of the animal kingdom and are unlikely to be consistently repeated and these are individuals that could fly our aircraft also.  The physique is observed and that means that these individuals could instantly slip into our society.  These were Terrans!

So long as we fail to understand that the bulk of UFO sightings are caused by the traffic of space adapted humanity that took to the stars prior to the Pleistocene Nonconformity, we will be looking for little green men and living with the idle assumption that any such visitors will have difficulty communicating.

There are reports out there claiming to establish any number of true alien creatures in our space and all that may have merit.  Yet mankind did arise 40,000 years ago at least and got out of Dodge around 15,000 years ago in order to shift the crust with the Pleistocene Nonconformity.  They have been waiting for us to get off the Earth and come knock on their door.

In the meantime they are now conducting close observation and I presume that includes reading our mail with real boots on the ground.  It is certainly what we would do.  When we do open communications they will know everything.

It was turning five in the morning on New Year's Day 1970, when Miss Doreen Kendall, a practical nurse at the on , noticed that one of the elderly patients in her ward was restless. Deciding the patient was too warm, she went to a window and parted the drapes to let in a little air.


"Just as I pulled the drapes a brilliant light hit me in the eyes," she said. "It was still dark outside, but about 60 feet away right above the children's ward to my left there was this object so big and bright I could see everything clearly."


"The object was circular and had what I guess you would call a top and bottom. The bottom was silvery, like metal, and was shaped like a bowl. There was a string of bright lights around it like a necklace. The top was a dome made of something like glass. It was lit up from inside and I could see right into it."


Continuing her account in question-and-answer form, Miss Kendall told me there were two male-like figures in the craft, one behind the other, facing to her right away from the hospital. The one in front appeared taller, or perhaps was positioned higher, than the other. Their heads were encased in close-fitting dark material.


As she watched with intense curiosity, yet completely unfrightened - "I never felt so peaceful in all my life. I wish I could have talked to them" - she became aware of seeing more of the interior of the craft and realized it was tilting. In a moment she could see to a point just below their knees and noticed they were standing in front of what looked like stools.


"They looked like fine, tall, well-built men," she said. "They were dressed in tight-fitting suits of the same material that covered their heads but their hands were bare and I noticed how human they looked. Their flesh seemed just like ours."


Intrigued as she was by the appearance of the two figures, Miss Kendall found her interest centered on what looked like an instrument panel facing the one in front.


"The man in front was staring at the panel as if something very important was going on, and I wondered if they might have had mechanical trouble. I even thought they might have landed on the roof of the hospital and then had trouble taking off."


She described the panel as a very large one, taking up almost half the interior of the object and reaching nearly to the top of the dome. The instruments, if that is what they were, seemed to be inset in the chrome-like metal of the panel and there was a variety of sizes.


The total sight was so absorbing that at first Miss Kendall's thoughts were lost to everything else, and for a moment she forgot Mrs. Frieda Wilson, a registered nurse, was in the same room.


"Then when I did think of it, I guess I hesitated. I felt I mustn't make a noise or do anything that would break the trend of what was happening."


At this point, almost as if her thoughts were being read, she saw the figure in the rear turn slowly and face squarely in her direction.


"He seemed to look right at me but I couldn't see his face. It was covered by a darkish material that looked softer than the rest of his suit. I'm sure he saw me because then he touched the other man on the back. When he did this, the man in front reached down and took hold of something like a lever beside him. I'll never forget how deliberately he did it. He pushed it back and forth and the saucer, or whatever you'd call it, started to circle slowly, still close to the building, in an anticlockwise direction."


The motion seemed to break the spell for Miss Kendall, for then she remembered Mrs. Wilson was there and called her over.


Later I spoke separately to Mrs. Wilson, who said, "I noticed Miss Kendall standing at the window and wondered what she was looking at. In fact, I was just going to see when she beckoned to me, and then I saw this great big light over the patio outside the children's ward. I'd say it was quite a bit larger than a car. (By the estimate of both witnesses, the object spanned a width of about five windows of the children's ward. This gave it a diameter of at least 50 feet.) It looked circular in shape and the far side seemed to be higher than the side near us. It was moving around slowly and then it started to move away. I didn't really see any top or bottom to it. It was all just tremendously bright." - John Magor – UFOBC


"There was a brilliantly lighted dome, occupied by two human-like men, which was stationary in the air about 60 feet away from CDH, above the second floor where I was working in the extended care unit. I was so taken with the flying saucer that I didn't call anyone. I felt mummified and fascinated and stood there for about five minutes watching before I called another nurse, Mrs. Freda Wilson.


The craft, which was slightly tipped downwards toward her was about 50 feet in diameter, or about the width of five hospitalwindows. While the craft hovered above her, she could see only the upper half of the figures, but when the vehicle tilted she saw their full profile. They had nice physiques, more than six-feet tall, and their hands were the same color and shape as ours. Their faces were covered and they wore dark suits, like a pilot's uniform, of soft-looking material.


Maybe because I'm so mechanically minded, but I suspect they were having mechanical trouble and had stopped to make repairs. She said one man stood over an instrument panel made of chrome, and the other stood behind him. There were stools for them to sit on. She described the saucer-shaped craft as silvery, metallic with a necklace of lights around the middle. It made no sound while it hovered above her or even later when it took off southward. While watching, one man turned and looked directly and put his hand on the back of the man sitting down.


The other man then pulled back 'a joystick' similar to those in a big airplane and the object tilted sideways giving her an even better view of the instrument panel and interior. She noticed that the dome seemed to be lit from below rather than from above. When it started to pull away, I realized no one would believe me and I ran and called Mrs. Wilson to come and look.


She asked 'What on earth it that?' and I said "It's a flying saucer."


By this time five other nurses ran to the window and watched as the craft circled about five times and then slowly disappeared in a southeasterly direction. I was completely oblivious to anything else and felt no fear. In fact I would have loved to have gone for a ride and, if the men had spoken to me, I would have answered quite naturally. The reason I was so terrifically interested was because I always believed there were unidentified flying objects but now I am absolutely convinced." - The Cowichan Leader - 1/7/1970