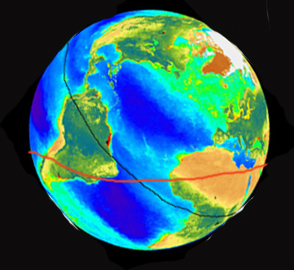 When I first worked through the implications of a crustal shift around 13,000 years ago, I was able to acquire the ice core data and it became clear that the event itself was real and that it was outright climate change in particular but arguably not climate caused.

What we have here clearly spelled out is the evidence of a switch been hit twice. The first time, 18000 years ago, the crust rebalanced naturally causing a regime change in the climate that was real but hardly ended the Ice Age itself. Of course precipitation flows changed and the pole itself was shifted. This happened naturally because of the ice build up on two continental masses asymmetrically positioned on the poles.

This provided the knowledge needed to trigger the Pleistocene Nonconformity in which a comet was directed to impact the Northern Ice Cap and shift the crust into its present position and end the Northern Ice Age. This occurred about 12900 years ago. For the next thousand years the Greenland cores observed extreme cold which ended abruptly with the likely draining of Lake Agassiz or some similar mass melt event such as the mass release of ice out of the Arctic or Hudson Bay. Any of these would plausibly allow a rapid increase in Greenland temperatures.

I am now more comfortable with the earlier event as the natural demonstration made possible the deliberate movement of the later event and we have a time frame for it all that is congruent.

The magnitude of the freeze is not so important as the sharpness of the recovery that ultimately resolved into the Holocene. After that it likely took a couple of thousand years for the bulk of the remaining ice on land to disappear and set the stage for continental agriculture around 10,000 years ago.

ScienceDaily (June 25, 2012) — Ice samples pulled from nearly a mile below the surface of Greenland glaciers have long served as a historical thermometer, adding temperature data to studies of the local conditions up to the Northern Hemisphere's climate.

But the method -- comparing the ratio of oxygen isotopes buried as snow fell over millennia -- may not be such a straightforward indicator of air temperature.

"We don't believe the ice cores can be interpreted purely as a signal of temperature," says Anders Carlson, a University of Wisconsin-Madison geosciences professor. "You have to consider where the precipitation that formed the ice came from."

According to a study published June 25 by the Proceedings of the National Academy of Sciences, the Greenland ice core drifts notably from other records of Northern Hemisphere temperatures during the Younger Dryas, a period beginning nearly 13,000 years ago of cooling so abrupt it's believed to be unmatched since.

Such periods of speedy cooling and warming are of special interest to climate scientists, who are teasing out the mechanisms of high-speed change to better understand and predict the changes occurring in our own time.

In the case of the Younger Dryas, average temperatures -- based on the Greenland ice -- plummeted as much as 15 degrees Celsius in a few centuries, and then shot back up nearly as much (over just decades) about 1,000 years later.


Working with UW-Madison climatologist Zhengyu Liu, collaborators at the National Center for Atmospheric Research and others, Carlson found their computer climate model breaking down on the Younger Dryas.

While it could reliably recreate temperatures in the Oldest Dryas -- a similar cooling period about 18,000 years ago -- they just couldn't find a lever in the model that would simulate a Younger Dryas that matched the Greenland ice cores.

"You can totally turn off ocean circulation, have Arctic sea ice advance all the way across the North Atlantic, and you still will have a warmer climate during the Younger Dryas than the Oldest Dryas because of the carbon dioxide," Carlson says.

By the time the Younger Dryas rolled around, there was more carbon dioxide in the air -- about 50 parts per million more. The warming effects of that much CO2 overwhelmed the rest of the conditions that make the Oldest and Younger Dryas so alike, and demonstrates a heightened sensitivity for Arctic temperatures to rising greenhouse gases in the atmosphere.

The researchers zeroed in on the Northern Hemisphere's temperature outlier, Greenland ice cores, and found that the conversion of oxygen isotope ratio to temperature typically used on the ice cores did not account for the sort of crash climate change occurring during the Younger Dryas. It assumes prevailing winds and jet streams and storm tracks are providing the moisture for Greenland precipitation from the Atlantic Ocean.

"The Laurentide ice sheet, which covered much of North America down into the northern United States, is getting smaller as the Younger Dryas approaches," Carlson says. "That's like taking out a mountain of ice three kilometers high. As that melts, it allows more Pacific Ocean moisture to cross the continent and hit the Greenland ice sheet." The two oceans have distinctly different ratios of oxygen isotopes, allowing for a different isotope ratio where the water falls as snow.

"We ran an oxygen isotope-enabled atmosphere model, so we could simulate what these ice cores are actually recording, and it can match the actual oxygen isotopes in the ice core even though the temperature doesn't cool as much," Carlson says. "That, to us, means the source of precipitation has changed in Greenland across the last deglatiation. And therefore that the strict interpretation of this iconic record as purely temperature of snowfall above this ice sheet is wrong."

By the study's findings, Greenland temperatures may not have cooled as significantly as climate headed into the Younger Dryas relative to the Oldest Dryas, because of the rise in atmospheric carbon dioxide that had occurred since the Oldest Dryas.

"You can say at the end of the Younger Dryas it warmed 10, plus or minus five, degrees Celsius. But what happened on this pathway into the event, you can't see," Carlson says. It's a fresh reminder from an ancient ice core that climate science is full of nuance, according to Carlson.

"Abrupt climate changes have happened, but they come with complex shifts in the way climate inputs like moisture moved around," he says. "You can't take one difference and interpret it solely as changes in temperature, and that's what we're seeing here in the Greenland ice cores."

The National Science Foundation and Department of Energy funded the research.
Posted by arclein at 12:00 AM