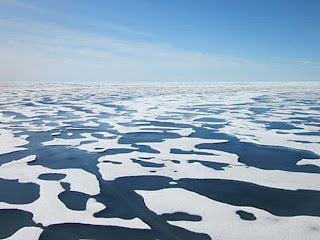 This is a very unexpected result and underscores the richness of this ecosystem. It surely supports a large fishery of some sort that we barely understand if at all. Just because we have just discovered it hardly suggests that it is uncommon.

In the meantime current arctic ice is pretty well within the channel created by the most recent years which is significantly below the long term average up to 2000. There remains no indication that we are facing an actual uptrend as yet.

Long term ice has been deeply reduced although one never seems to get comfortable readings on that. It appears that we may have established a new equilibrium instead that will only trend downward if as in 2007, we have the right combination of winds.

In the meantime we now know that an increase in the extent of one year ice will hugely increase the biological content of the Arctic way more than anyone ever imagined.


Small melt ponds are forming over vast expanses of Arctic ice, like the one shown here in the Chukchi Sea between Siberia and Alaska in July 2011. Scientists say the ponds allow light to penetrate through the underlying ice and help explain the massive phytoplankton blooms discovered beneath the metre-thick ice
The most intense phytoplankton bloom recorded on Earth occurred under the Arctic ice last summer — a finding that has stunned seasoned polar scientists.

“The ice was over a metre thick,” says Kevin Arrigo at Stanford University, leader of the international team that reported Thursday finding the massive bright green algal bloom beneath the ice.

It turns out that first-year polar ice — long considered impenetrable to sunlight — can create ideal conditions for growing phytoplankton, the single-celled plants crucial to the Arctic food chain.

The team was on a U.S. icebreaker smashing its way across the Chukchi Sea between Siberia and Alaska last July when equipment used to measure phytoplankton went “haywire.”

“We thought there was something wrong with the instruments,” Arrigo told Postmedia News.

Then the scientists made their first scheduled stop to take ice samples and got a good look at the ocean below.

“The water was completely green,” Arrigo said. “It was like pea soup.”

The farther they ventured into the ice-covered sea for their NASA-funded project to study ice, the more intense the under-ice algae bloom, says Arrigo, a veteran of many trips to the Arctic and Antarctic.
“It was shocking,” he says.

Phytoplankton were growing and multiplying at an extraordinary rate under an expanse of ice more than 100 kilometres across, the team reported Thursday in the journal Science.

Arrigo says records indicate it was the “most intense” algal bloom ever seen anywhere on Earth. “We had incredibly high concentrations of algae all of the way down to 70 metres in some cases,” he said.

First-year polar ice, which forms over just one winter, is becoming more common in the Arctic due to the recent retreat of much thicker multi-year ice.

While first-year ice was thought to be impenetrable by sunlight, Arrigo says it can actually create optimal growing conditions for algae.

Melt ponds tend to form on top of the ice as temperatures climb in June and July. And the shallow ponds act like lenses, allowing 50% of the light to penetrate through the ice into the water below.


At the same time, the ice screens out UV radiation that can stunt algal growth, he says.
Add the Arctic’s 24-hour summer sunshine, and phytoplankton populations under the ice can explode.

Another factor at play is a “striking” change in some Arctic winds in recent years, says co-author Kent Moore at the University of Toronto. More persistent easterly winds are bringing up more nutrients in the Chukchi Sea, which appears to have fed the under-ice bloom.

Thursday’s report deals with the bloom under the ice in the Chukchi Sea, but Arrigo suspects algae could be blooming under the ice in about 25% of the Arctic Ocean, including large parts of Canada’s North. Anywhere, he says, with shallow water, lots of nutrients and first-year ice.

As the Arctic warms, the scientists say under-ice phytoplankton blooms could become increasingly common, occur early in the season and consume nutrients that would normally feed open-water blooms.

“The real surprise is all these unanticipated consequences of global warming,” says Moore.

The shift may benefit some creatures, the researchers say, but others may have difficulty adjusting.

“If you’re a seabird planning to get to Chukchi Sea in mid-July to feed, you may be out of luck,” says Moore.
Posted by arclein at 12:00 AM

"“The real surprise is all these unanticipated consequences of global warming,” says Moore." It is not unanticipated by those that are out to change the climate by manmade efforts of spraying the skies with chemicles, called Chemtrails. If you don't know what those are, then look it up. You just might have a different look about who it is that is causing global warming.