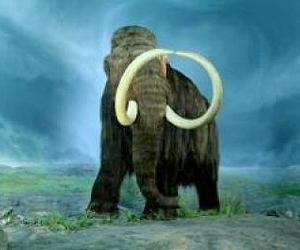 In the end remnants of the great mammoth herds were plausibly hunted into extinction if only through the successful killing of young animals.

Yet the real killer was the comet blast around 12900 BP that left scattered remnant herds likely below genetic viability. That these remnants then lasted until almost historic times is no surprise.

The second item tells us that successful elephant hunting is a living art and that it certainly could explain why the decimated herds generally never recovered. The claims of a loss of habitat is not so convincing simply because even in the middle of a peat bog, conditions vary greatly and food exists for a herbivore.

Healthy populations tend to be self sustaining as the Elephant shows us in Africa particularly if a village is needed to hunt a single animal every couple of months. Village density then becomes the controlling factor and that is always too low to knock out large populations.

What was left after the comet impact was a handful of Refugio with small herds and likely several surviving villages able to hunt out remaining animals and a desperate need to do so.

Rising temperatures, changing vegetation and the spread of humans all contributed to the extinction of the woolly mammoth, according to a new study that said no single factor was to blame.

The tusked mammal's demise was gradual, not sudden, said the authors, disputing earlier assertions that the giants were wiped out quickly -- either by disease, humans or a catastrophic weather event.

"It wasn't just one thing that took them out everywhere all at once," author Glen MacDonald of the University of California's department of evolutionary biology told AFP.

"With the mammoths, it was just a story of this almost continuous litany of challenges that they faced in terms of changing climate, huge changes in habitat and then the spread of humans and potentially human predation to new areas."

The cause of the woolly beasts' disappearance has generated fierce debate among experts.

Some hold that the giants that once strode across Eurasia and north America were hunted to extinction by humans, while others blame global warming for decimating a species adapted for colder climes.

A colony of woolly mammoths is believed to have survived up to about 4,000 years ago on what is today Russia's Wrangel Island, north of Siberia in the Arctic Ocean.

In a paper published Tuesday in Nature Communications, a team of researchers in the United States and Russia said their own analysis of radiocarbon-dated evidence has revealed a pattern of slow demise caused by several factors.

"This is an extinction that took a long time. It extended over thousands of years," said MacDonald.

The team asserts that woolly mammoths were abundant up to 45,000 to 30,000 years ago in continental Beringia, a land bridge that linked present-day Alaska and eastern Siberia before it was submerged by the sea thousands of years ago.

In the last Ice Age, about 25,000 to 20,000 years ago, northern populations declined while those in the south increased, they said.

"Coming out of that, though, you had smaller populations that were just beginning to grow -- and they were then faced with large habitat changes that made the south no longer an amenable area for them and started threatening their ability to utilise the north," said MacDonald.

The problem lay in the spread of peat- and wetland areas which offered poor mammoth nutrition, he explained.

The giants ate grasses and the soft shoots of woody plants like willows, and this food became increasingly scarce.


"At the same time, for the first time in Alaska and North America they had human predators there as well," pointed out MacDonald.


This type of coalescence of factors may be seen again in the near future, he warned.


"If you look at the magnitude of changes we anticipate with climate change in this upcoming century and land use changes with human population growth and land cover changes, we are kind of subjecting species to a lot of the same pressures but we are compressing the timescale," said the scientist.

"That is frightening in some ways."

In 1979, I went on a trip with a lifelong friend who was a Photographer for National Geographic Magazine, to Nairobi, Kenya, for a month. While there my friend Kurt and I were invited to go along with a British Governmemt Wildlife Agent/Hunter that was responsible for locating a "Rogue" Male Elephant that had destroyed several villages a few weeks earlier, and killed a small boy..


On day three the Elephant was located and I got to watch from a distance while the Wildlife Officer shot and killed the Elephant with 2 shots from a 375 H&H Double Rifle from about 55 yards away....


It took 25 villagers over 20 hours to field dress and cut up the Elephant. NOTHING went to waste, organs,fat,bone,even the bone marrow were all used .The Elephant was determined to weigh just over 6100 LBS, and yielded about 1300-1400 LBS of edible meat. The meat was a Dark Redish/ Purple running thru it. For lack of a better description, it looked like blood-bruised meat, but VERY lean with little fat. The exposed side of the Elephant was butchered first than the side that was on the ground was exposed after 40+ villagers pulled the carcass over to expose the side that was on the ground with ropes. I remember the Heart weighed 22 KG which converts to 48 LBS (If my math is correct) I didn't get to sample the heart-meat


The Government Agent advised that the meat would feed a minimum of 240 villagers for a month if it was rationed properly by the tribesmen. There was a big celebration to which I and my friend were invited too. The meat was first smoked over green wood for several hours, then cooked in strips over an open fire....To everyones disasppointment it DIDN'T taste like Chicken...lol The closest thing I can compare it to is "stringy" Moose or Elk meat or even Buffalo..It tasted somewhat "gamey" but it wasn't repulsive. I also learned that the Ivory was valuable 12" Tusks would have brought $800 or so on the Black Market, but the Elephant meat was worth much more. In the City of Nairobi, Elephant meat brought $32-$40 US a pound.(Even more if smuggled out of Africa) Back in the late 70's the average daily wage was only $1 U.S.