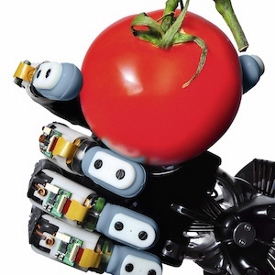 Achieving touch sensitivity was a critical question in terms of advancing robotic technology. That appears to now be done and vastly more useful devices will now emerge. We tend to underestimate just how dependent we are on touch generally, but we use it constantly to work with tools and would lose a large part of our own capacity without is.

Tool use relies on sight and touch working in combination and it is fair to give each equal weight.

In short, the brave new world of robotics is really upon us and it will not prove too hard to even establish bio feedback for prosthetics as this has already begun.

Astonishingly we are solving all the problems related to a true robot as imagined in the past and even solving the problem of establishing a real reason for their existence. None of that was terribly obvious when the research began but progress has begun to steadily pay dividends.


http://www.pcmag.com/article2/0,2817,2406050,00.asp
Robots may not have a sense of emotional feeling, but thanks to researchers at the University of Southern California's Viterbi School of Engineering, they may soon have the gift of physical feeling.

With the right sensors, actuators, and software, robots can be given the ability to feel, or at least identify materials by touch, the school said.

Researchers today published a study in Frontiers in Neurorobotics said said a specially designed robot built to mimic the human fingertip can actually outperform a living person in identifying a wide range of materials, based on textures.

While the machine is good at identifying which textures are similar to each other, Loeb and Fishel said it still can't tell what textures people will prefer. Instead, success in the realm of touch-sensitive robotics could pave the way for advancements in prostheses, personal assistive robots, and consumer product testing, the university's press release said.

More than a one-trick robot, the machine is capable of other human sensations, like discerning where and in which direction forces are applied to the fingertip, and even the thermal properties of an object. Fingerprints on the surface of the BioTac sensor's soft, flexible "skin" enhance its sensitivity to vibration.