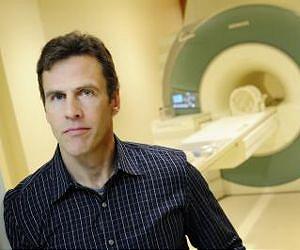 This work is actually quite suggestive and needs to be thought through a lot more. We can now investigate what cause a loss of trust in all its potential subtleties and that is rather valuable as any marketing professional can tell you.


Just using this experimental rig to operate focus groups is immediately attractive. We need to know when a message has gone off cue and this looks like it can do just that.


This is excellent work and I look forward to much more.


Suspicion resides in two regions of the brain


Fool me once, shame on you. Fool me twice, shame on my parahippocampal gyrus. Read Montague, Ph.D., and colleagues at the Virginia Tech Carilion Research Institute discovered two distinct sites for suspicion in the brain: the amygdala, which correlates strongly with a baseline distrustfulness, and the parahippocampal gyrus, which acts like a cerebral lie detector. Credit: Virginia Tech


Scientists at the Virginia Tech Carilion Research Institute have found that suspicion resides in two distinct regions of the brain: the amygdala, which plays a central role in processing fear and emotional memories, and the parahippocampal gyrus, which is associated with declarative memory and the recognition of scenes.


"We wondered how individuals assess the credibility of other people in simple social interactions," said Read Montague, director of the Human Neuroimaging Laboratory and the Computational Psychiatry Unit at the Virginia Tech Carilion Research Institute, who led the study.


"We found a strong correlation between the amygdala and a baseline level of distrust, which may be based on a person's beliefs about the trustworthiness of other people in general, his or her emotional state, and the situation at hand. What surprised us, though, is that when other people's behavior aroused suspicion, the parahippocampal gyrus lit up, acting like an inborn lie detector."


The scientists used functional magnetic resonance imaging, or fMRI, to study the neural basis of suspicion. Seventy-six pairs of players, each with a buyer and a seller, competed in 60 rounds of a simple bargaining game while having their brains scanned. At the beginning of each round, the buyer would learn the value of a hypothetical widget and suggest a price to the seller.


The seller would then set the price. If the seller's price fell below the widget's given value, the trade would go through, with the seller receiving the selling price and the buyer receiving any difference between the selling price and the actual value. If the seller's price exceeded the value, though, the trade would not execute, and neither party would receive cash.


The authors found, as detailed in a previous paper, that buyers fell into three strategic categories: 42 percent were incrementalists, who were relatively honest about the widget's value; 37 percent were conservatives, who adopted the strategy of withholding information; and 21 percent were strategists, who were actively deceptive, mimicking incrementalist behavior by sending high suggestions during low-value trials and then reaping greater benefits by sending low suggestions during high-value trials.


The sellers had a monetary incentive to read the buyers' strategic profiles correctly, yet they received no feedback about the accuracy of the information they were receiving, so they could not confirm any suspicions about patterns of behavior.


Without feedback, the sellers were forced to decide whether they should trust the buyers based on the pricing suggestions alone. "The more uncertain a seller was about a buyer's credibility," Montague said, "the more active his or her parahippocampal gyrus became."


The authors believe a person's baseline suspicion may have important consequences for his or her financial success.


"People with a high baseline suspicion were often interacting with fairly trustworthy buyers, so in ignoring the information those buyers provided, they were giving up potential profits," said Meghana Bhatt, the first author on the research paper. "The ability to recognize credible information in a competitive environment can be just as important as detecting untrustworthy behavior."


The findings may also have implications for such psychiatric conditions as paranoia and anxiety disorders, said Montague. "The fact that increased amygdala activation corresponds to an inability to detect trustworthy behavior may provide insight into the social interactions of people with anxiety disorders, who often have increased activity in this area of the brain," he said.


The research appeared in the early online edition of the Proceedings of the National Academy of Sciences (PNAS) on May 10 in the article "Distinct contributions of the amygdala and parahippocampal gyrus to suspicion in a repeated bargaining game" by Meghana Bhatt, PhD, an assistant research professor at the Beckman Research Institute of the City of Hope Hospital in Duarte, Calif.; Terry Lohrenz, PhD, a research assistant professor in the Virginia Tech Carilion Research Institute; Colin F. Camerer?, PhD, the Robert Kirby Professor of Behavioral Economics at the California Institute of Technology; and Montague, PhD, the corresponding author, who is a professor of physics at the Virginia Tech Carilion Research Institute and in the College of Science at Virginia Tech. The research was supported by grants to Read Montague from the Wellcome Trust and the National Institutes of Health.

All About Human Beings and How We Got To Be Here