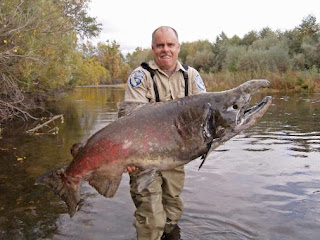 What is really important here is that the problems with the salmon fishery appear to be related to a serious virus load that obviously produces high mortality.

The story about muzzling the scientist is a non story unless you believe research sponsors’ do not have the right to manage the media aspect.  The fact and the reality is that they do and must.  Legal and regulatory responsibility descends on one man (it will not be the scientist) in our system and that means checks are mandated however unwieldy.  This all sounds like someone had a hissy fit.

The key question is what actually the nature of the virus is and what has been its historical significance.  It may well be the salient determinant of salmon survival.  Do not just think that it is a recent addition to the ecology.

It certainly tells us that even a perfectly managed river system is vulnerable to population crashes from a virus.  We need to know that is true or not.

Top bureaucrats in have muzzled a leading fisheries scientist based on Vancouver Island whose discovery could help explain why salmon stocks have been crashing off 's West Coast, according to documents obtained by Postmedia News.

The documents show the Privy Council Office, which supports the Prime Minister's Office, stopped Kristi Miller from talking about one of the most significant discoveries to come out of a federal fisheries lab in years.

Science, one of the world's top research journals, published Miller's findings in January. The journal considered the work so significant it notified "over 7,400" journalists worldwide about Miller's "Suffering Salmon" study.

It advised reporters to contact , a media officer with the federal Department of Fisheries and Oceans in , "to set up interviews with Dr. Miller."

The documents show major media outlets were soon lining up to speak with Miller, but the Privy Council Office said no to the interviews.

The Privy Council Office also quashed a Fisheries Department news release about Miller's study, saying the release "was not very good, focused on salmon dying and not on the new science aspect," according to documents obtained by Postmedia News under the Access to Information Act.

The Privy Council Office and the Fisheries Department said Miller has not been permitted to discuss her work because of the Cohen Commission, a judicial inquiry created by the prime minister to look into declines of the famed sockeye salmon.

Miller is expected to appear before the commission in late August.

The Privy Council Office has "management responsibility" for the commission and decided Miller should not give media interviews about her study because of the inquiry, said PCO spokesman Raymond Rivet.

"Fisheries and Oceans Canada is conscious of the requirement to ensure that our conduct does not influence, and is not perceived to be attempting to influence, the evidence or course of the inquiry," department spokeswoman Melanie Carkner said in a written statement.

But observers say it is more evidence of the way the government is undermining its scientists.

"There is no question in my mind it's muzzling," said Jeffrey Hutchings, a senior fisheries scientist at 's .

"When the lead author of a paper in Science is not permitted to speak about her work, that is suppression," he said. "There is simply no ifs, ands or buts about that."

The Harper government has tightened the leash on federal scientists, whose work is financed by taxpayers and is often of significant public interest - be it about fish stocks, air pollution or food safety.

In one high-profile case reported by Postmedia News last year, Natural Resources scientist Scott Dallimore had to wait for "pre-clearance" from political staff in the minister's office in to speak about a study on a colossal flood that swept across northern at the end of the last ice age.

Researchers, who used to be free to discuss their science, are now required to follow a process that includes "media lines" approved by communications officers, strategists and ministerial staff in Ottawa. They vet media requests, demand reporters' questions in advance and decide when and if researchers can give interviews.

Environment now even has media officers in taperecording the interviews scientists are allowed to give.

Yet transparency as well as open communication and discussion are essential to science, Hutchings said, and 's excessive control over communication is "really poisoning the science environment within government."

To Hutchings, the muzzling of Miller is "all about control - controlling the message and controlling communication."

The government released 762 pages of documents relating to the Miller study to Postmedia News. Many passages and pages were blacked out before they were released.

The documents give a glimpse of the way media strategists, communication specialists and officials control and script what government scientists say - or, in Miller's case, do not say - about their research.

The documents show the Fisheries Department wanted to publicize Miller's study, which raises the spectre of a mysterious virus killing huge numbers of salmon before they reach their spawning grounds.

The lines said Miller's findings "demonstrate unequivocally that salmon are entering the river in a compromised state and that survivorship can be predicted based on gene expression more than 200 kilometres before salmon reach the river."

Miller's team has not yet identified a culprit, but her Science study said one possibility was a virus associated with leukemia, which can be transmitted from fish to fish.

Reporters from Postmedia News, CBC and many other media, including Time magazine, asked to speak with Miller after receiving the Jan. 9 notice from Science.

The documents show DFO communications staff firing off a series of "URGENT" emails as they tried to get clearance from for Miller's "media lines" and the okay for her to speak with reporters.

They eventually got approval from DFO's deputy minister and the federal fisheries minister's office but then had to go "to PCO for sign off," the documents say.

"You need to write a note for hotbutton approval," Rhonda Walker-Sisttie, director of DFO public affairs and strategic communications in Ottawa, told the Vancouver communications branch by email, advising them to use the "PCO template for media requests."

"If we are unable to set up a technical briefing or interviews for later today, the opportunity for DFO to gain the profile we would like for Kristi's work may be lost or very much diluted," Davis said in one email.

"We are pushing hard," Walker-Sisttie assured the communications office.

Then, weeks after the department learned Miller's findings were to be published in Science and several days after 7,400 journalists were notified about the study, the PCO decided not to let Miller talk about her findings and their significance.

"PCO has decided that we can only respond in writing," Walker-Sisttie reported from . Another explained: "Kristi was not approved to provide interviews."

The reporters filed stories based on her highly technical Science report and interviews with some of Miller's colleagues at the University of B.C.

Miller is still not allowed to speak about the Science report, which she wrote in a Nov. 12 memo "reflects only a fraction of what we know."

But Miller will finally be able to discuss her work in late August, when she is scheduled to testify at the Cohen Commission.
Posted by arclein at 12:01 AM

that photo is BS. No way he would casually hold a fish that size with his arms sticking all the way out.