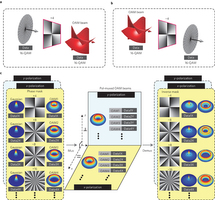 The electronics revolution keeps rolling along.  This trick will make the ultimate holodeck much closer.  A room covered with interactive adjoining screens is completely plausible even today and screen data density levels up to the task of realistic holographic imaging is been rapidly approached.  This wireless communication trick will be perfect even at short range. Thus all the screens could be operated independently and simultaneously from a master.

I think we are seriously about ten years out now.  That gives us just enough time to upgrade the historical film stock to some form of three dimensional presentation protocols.

The future work space can be a holodeck cockpit in which the entirety of one’s perceptive space can be anything you want, even the bridge of the Starship Enterprise.  I no longer think that we have any issues setting it up and actually making it all happen even somewhat crudely today.

Adding a Twist dimension to communication for 2.5 terabits per second now and hundreds of times more later

Extreme Tech - American and Israeli researchers have used twisted, vortex beams to transmit data at 2.5 terabits per second. This twist encoding technique is likely to be used in the next few years to vastly increase the throughput of both wireless and fiber-optic networks.


These twisted signals use orbital angular momentum (OAM) to cram much more data into a single stream. In current state-of-the-art transmission protocols (WiFi, LTE, COFDM), we only modulate the spin angular momentum (SAM) of radio waves, not the OAM. If you picture the Earth, SAM is our planet spinning on its axis, while OAM is our movement around the Sun. Basically, the breakthrough here is that researchers have created a wireless network protocol that uses both OAM and SAM.

The next task for Willner’s team will be to increase the OAM network’s paltry one-meter transmission distance to something a little more usable. “For situations that require high capacity… over relatively short distances of less than 1km, this approach could be appealing. Of course, there are also opportunities for long-distance satellite-to-satellite communications in space, where turbulence is not an issue,” Willner tells the BBC. In reality, the main limiting factor is that we simply don’t have the hardware or software to manipulate OAM. The future of wireless networking is very bright indeed. 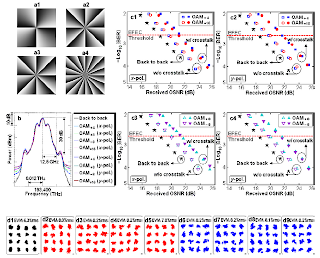 The recognition in the 1990s that light beams with a helical phase front have orbital angular momentum has benefited applications ranging from optical manipulation to quantum information processing. Recently, attention has been directed towards the opportunities for harnessing such beams in communications. Here, we demonstrate that four light beams with different values of orbital angular momentum and encoded with 42.8 × 4 Gbit s−1 quadrature amplitude modulation (16-QAM) signals can be multiplexed and demultiplexed, allowing a 1.37 Tbit s−1 aggregated rate and 25.6 bit s−1 Hz−1 spectral efficiency when combined with polarization multiplexing. Moreover, we show scalability in the spatial domain using two groups of concentric rings of eight polarization-multiplexed 20 × 4 Gbit s−1 16-QAM-carrying orbital angular momentum beams, achieving a capacity of 2.56 Tbit s−1 and spectral efficiency of 95.7 bit s−1 Hz−1. We also report data exchange between orbital angular momentum beams encoded with 100 Gbit s−1 differential quadrature phase-shift keying signals. These demonstrations suggest that orbital angular momentum could be a useful degree of freedom for increasing the capacity of free-space communications. 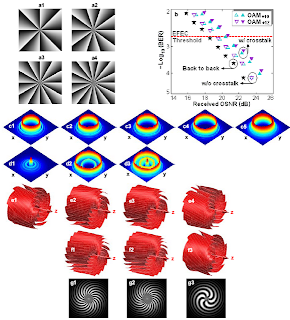