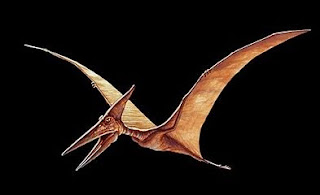 I came across this piece which nicely fills in the blanks on the pterodactyl or pterosaur phenomena. We can spell out what is presently known rather well now.

1 There are two types identified and the larger type is likely global in distribution. The larger type can have twenty foot wingspans.
2 They are bio-luminescent.
3 They are generally nocturnal
4 They hunt fish and are able to do so by diving into the sea to capture prey. Their bio-luminescence is an enabler.
5 Their range is expanding somewhat to take advantage of human dominated regions. This is commonly happening with a number of creatures as they overcome their fears.

It is also plausible that curious reports of black helicopters associated with cattle mutilation could in fact be such a creature. Certainly the prey opportunity fits the creature who merely may take advantage of downers. I would like to see proper confirmation that apparent blood loss is simply not pooling after death. We still have an alternative for blood consumption, but confirmation is needed already.

It is also likely that lighting drives them away from human settlement and accounts for the scarcity of observations. They need to preserve night vision.

NOTE: There has been renewed interest in Pterosaur research the past few years. I have posted information as it was forwarded to me. An expedition in Papua New Guineacontinues to uncover interesting anecdotal evidence. There have been a few recent videos released but these, IMO, are not convincing and depict only common native species. Nonetheless, I feel there is an excellent possibility that pterosaur-like creatures exist somewhere on Earth. I have posted most of the current information below. I realize that there is a lot to read but I felt it was essential to include it all...Lon


helium - Papua New Guinea, Southwest Pacific Ocean—The Ropen (‘demon flyer‘) is a monstrous creature that’s terrified the natives of Papua New Guinea for thousands of years. Another smaller creature, the Duah-possibly related to the Ropen-haunts some of the far flung outlying islands.


The descriptions of both monsters match that of fabled pterosaurs—ferocious flying dinosaurs thought to be extinct for 65 million years.


Jim Blume and David Woetzel are two daring researchers that have explored the dangerous regions—including the treacherous outlying islands—where the prehistoric monsters are known to hunt their prey.

Not only have these two compiled eyewitness accounts of the creatures from frightened natives, and physical evidence of gigantic nesting sites in some of the mountainous cliff areas, both men have personally witnessed the soaring creatures—and Woetzel even shot some video footage of one.

First brought to the attention of Western missionaries following WWII, the often nocturnal flying creatures are described as having large bat-like wings, an elongated beak filled with razor teeth, sharp, tearing claws and a very long whip-like tail with a split or flange on the end.


Reports from natives and investigators indicate that the creatures glow in the dark and are clearly visible in the night sky. This phenomenon—called the ‘Ropen light’—was observed at length and videotaped by researcher David Woetzel.


It’s hypothesized the bio-luminescent glow assists the creatures’ efforts to hunt and catch fish—their primary diet—in the deep darkness of the tropical night.


The evidence for two types of living pterosaurs


Although the Ropen and Duah have strikingly similar physical characteristics, the giant Ropen inhabits Papua New Guinea while the smaller Duah stays relatively close to the outlying islands.


Other than actual modern-day sightings of the two, a surviving 16th Century maritime chart lends credence to the hypothesis of two distinctly different creatures.


The 1595 chart cautions sailors about ‘sea monsters’ and depicts various coastal regions of Earth where monsters might be found. In the area of Papua New Guinea, two ‘sea monsters’ are illustrated: one is much larger than the other, yet both have almost identical physical traits. Each have long necks, prominent head crests, tails ending with a flipper like appendage and ridges along their backs. They are shown flying above an island.


Despite the general consensus amongst orthodox zoologists that the creatures don’t exist, those that have actually traveled deep into Papua New Guinea’s primitive rain forests and tiny offshoreislands are convinced the creatures are living there now—especially since they have seen them firsthand.

Furthermore, strong evidence exists that one type is very big with impressive 20-foot plus wingspans, while the smaller, island dwellers have 4 to 4 1/2-foot wingspans.


Blume and Woetzel are convinced that two different types of pterosaurs exist and the indigenous natives concur. The locals insist the Duahs are not Ropens.


Mounting evidence supports the contention that the large Ropen are living Dimorphodon pterosaurs, with dermal bumps and a head crest; while the numerous sightings of the smaller creatures that inhabit the caves of the islands dotting the Bismarck Archipelago are that of the supposedly extinct Rhamphorhynchus-a pterosaur with a wingspan of about 3 to 4 feet.


Blume’s investigations indicate that wingspans of some of the pterosaurs may reach 10 to15 feet, though several other investigators point out that natives have encountered Ropens with much larger wingspans.

Most intriguing of all, the living pterosaurs may not be exclusive to Papua New Guinea. Similar creatures have been sighted and reported on and off for centuries throughout Central Africa.

The natives in the Congo, Zambia, Angola, Kenya and Zaire call the creatures ‘Kongomato.’ They assert the reddish African version has large, leathery wings, sharp claws, a split tail, and prominent teeth.

While humans smugly believe they are the masters of this planet, the original rulers may still command some of the darker corners of this shrinking world.


NOTE: I received an email from Jonathan Whitcomb at Live Pterosaur: "Last month I interviewed an eyewitness who lives in the Manus Island area of Papua New Guinea. More interesting than his short sighting one night is the account from an older man: The "kor" (a new name to me, probably the same species as the ropen of Umboi Island, or at least similar) creatures attacked some Japanese, during World War II, with a devastating response from those Japanese. I believe this story, for my contact seems to be credible."


The following is posted at his blog:


Three days ago, I received an email from R.K. (anonymous), of the Manus Island area of Papua New Guinea. (We starting communicating earlier this month.) The nocturnal flying creatures that he described to me–I believe they are ropens–were common and were dangerous to local fishermen previous to the early 1940’s, when their numbers declined. In these northern islands, the creature is called “kor.”

Here is part of R.K.’s account of the Japanese retaliation against the creatures that had attacked them:


”...it was the japs [Japanese miliary] on the island who were attacked by the kor. They [Japanese soldiers] apparently shot several wounding them then followed them to cves [caves] and blew [blew up] the entrances. They called ships fire on the hills and pounded them for several hours.”


R.K. asks an interesting question: “I wonder if there is a record of that somewhere?” Perhaps there is an old Japanese veteran who knows about this or has written about the battle with those creatures. If so, perhaps the word used for those creatures would be “dragons."


R.K., of Manus Island, Papua New Guinea, reports that the glowing nocturnal flying creature of those northern islands is called “kor.” Descriptions strongly suggest that they are at least similar to the ropen of Umboi Island, perhaps the same species: glowing with various colors, a long tail, “skin all over it,” and a few creatures growing to a large size. A few American investigators (some of them exploring in some areas of Papua New Guinea) are convinced that these are living pterosaurs.


According to what R.K. has learned from some older villagers, the kor catch fish “by skimming slowly around on the ocean surface, then as the light under their wings and belly glowed bright and attracted fish, the korr would swoop in . . . ” and “they eat in flight.”


But these are not just old reports. R.K. has reported his own encounter [early 2010 report]: “Two years ago we took a boat out to investigate and could see the lights soaring over us and heard flapping of wings.”


Older web page reports of smaller “ropens” around Manus Island (as if these were a different species because of size) are questionable. One kor was large enough to kill an islander in the 1960’s (according to R.K., this was the last human death from an attack). Perhaps the reports of smaller creatures come from the larger number of younger ones. Larger ones are reported to eat turtles and even young crocodiles. Some animals continue to grow throughout their lives; perhaps the kor, on occasion, also grows to a large size.


Duane Hodgkinson, now a flight instructor in Livingston, Montana, in 1944 was stationed near Finschhafen, in what was then called New Guinea. After he and his buddy walked into a clearing, they were amazed as a large creature flew up into the air. The men soon realized that it was no bird that started to circle the clearing. It had a tail “at least ten to fifteen feet long,” (book Searching for Ropens, 2007) and a long appendage at the back of its head: apparently, a live pterosaur.


Jonathan Whitcomb, a forensic videographer, interviewed Hodgkinson, in 2004, and found his testimony credible. In 2005, Garth Guessman, another experienced ropen investigator, video-taped his own interview with Hodgkinson and the session was analyzed by Whitcomb, who became even more convinced the World War II veteran was telling the truth: The man had seen a ropen.

In late 2006, Paul Nation, of Texas, explored a remote mountainous area on the mainland of Papua New Guinea. He videotaped two lights that the local natives called "indava." Nation believed the lights were from the bioluminescence of creatures similar to the ropen of Umboi Island. The video was analyzed by a missile defense physicist who reported that the two lights on the video were not from any fires, meteors, airplanes or camera artifacts. He also reported that the image of the two lights was authentic and was not manipulated or hoaxed.


In 2007, cryptid investigator Joshua Gates went to Papua New Guinea in search of the Ropen for his TV show Destination Truth. He and his team also witnessed strange lights at night and could not confirm what they were.


In 2009, the television show Monster Quest conducted an expedition in search of the "demon flyer" but found no evidence of the creature. Later, they had a forensic video analyst examine the Paul Nation video. The analyst could not definitely conclude what was causing the lights, but ruled out vehicles and campfires believing the footage was of a pair of bioluminescent creatures perched in a tree that later take flight.