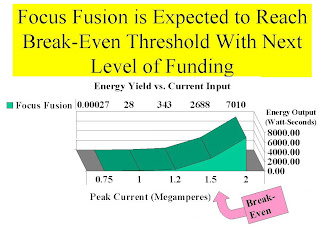 What is seen emerging is a clear path to direct fusion energy production. It appears we already have with the presently working pilot plants, a thermal solution using cold fusion, while this now appears ready to generate direct electrical current.

Of course, as usual a days predicted progress inevitably takes two at least. However, this looks top be about two years out from having a working power production device. Actually draining of the power has not been fully addressed as yet and may prove trickier than thought if only because the correct device is not on the shelf.

Wonderfully the theory appears to also be keeping up with experimental progress and the generation of papers suggests that the community is fully engaged in understanding and supporting this project.

The skills been developed are also important because we will be going quickly to larger sizes and this technology should see abatement of the range of issues as that happens. This may be optimistic on my part, as many technologies become more difficult as size is increased. I think the reverse will be true here.

Every doubling of current means 30 times power. So some relatively simple modifications which are being developed should boost power levels by 300 times.

Total elimination of arcing, which they are working on now, may drop the resistance to as low as 2 mOhms.

Full power, shorter electrodes, and our existing switches, FF-1 will produce over 2.3 MA, over twice our current output.

New, faster switches now under design for LPP by Raytheon will get us the rest of the way to our goal of 2.8 MA.

To gain higher yield and to attain “feasibility” the following steps are being done over the course of the next year (2012):

Since they first observed the 160 keV energies of the ions (equivalent to 1.8 billion C) over a year ago, we had been puzzled as to why they were so much higher than the 40 keV we had predicted.

The first big step to the solution came May 15, with the publication online in the Journal of Fusion Energy of a paper by the Iranian team, S. Abolhasani, M. Habibi, and R. Amrollahi, “Analytical Study of Quantum Magnetic and Ion Viscous Effects on p11B Fusion in Plasma Focus Devices.” The paper studied in greater detail the quantum magnetic field effect originally applied to the DPF by Lerner, for the first time independently confirming our calculations showing that ignition and net energy gain can be achieved with pB11 (hydrogen-boron) fuel, the key to obtaining aneutronic fusion energy.


But in addition, the paper applied to the plasma focus device a process studied by British physicist Malcolm Haines to explain high ion energies achieved in the Z-machine. That process, called “ion viscous heating” works like this: as the plasmoid contracts, ions moving inward at different velocities start to mix together, so that their ordered velocity of motion is converted into the random velocity of heat. By analogy this is a bit like trying to rapidly stir a vicious liquid like honey. The resistance of the liquid to rapid changes in velocity—its viscosity—converts kinetic motion to heat and the liquid warms up. The formulae derived in the paper indicated that this viscous heating could possibly explain FF-1’s high temperatures.


But there was a second puzzle to be solved. The viscous process heats only the ions—the heavy nuclei—not the electrons. If the electrons are too cold, collisions between them and the ions would rapidly cool the ions. So what heated the electrons up hot enough so they would not cool those ions too fast?


On June 10, Lerner thought of a possible solution. The electron beam will induce currents in the plasmoid electrons, just as any rapidly changing current induces other currents in a surrounding conductor (we intend to use this same process to capture the energy of the ion beam with a coil of wire). But since the plasmoid has a much greater density of electrons that the beam, the same current will be distributed over more electrons, and they will be moving much slower than the beam electrons. These slower electrons will have the time to undergo collisions and convert their kinetic energy to heat. Following up on this hypothesis, Talaei found a dozen important papers on this same process of electron beams heating plasma by induced currents, although none applied directly to the plasma focus. Curiously, all the papers dated from the 1970’s, the same fertile period that gave rise to the first research on the magnetic field effect.


When we combined the formulae from these papers for electron temperatures with the formulae from the viscous heating paper and plugged in the observed values for plasma density, radius and current from FF-1’s experiments, the predicted ion energy came out to 170 keV—in terrific agreement with our best observed results of 160 keV. Of course more experiments will be needed to fully confirm that this theoretical explanation is right, but this combination of processes is clearly a possible explanation.


Interestingly, the effectiveness of the ion viscous heating declines rapidly with increasing density of the plasmoid and smaller plasmoid size, while the effectiveness of the induced current heating rises for smaller, denser, plasmoids. So as we increase plasmoid density we expect to see a temporary decline in temperature, and then a subsequent rise back to the levels needed to burn pB11. Fusion yield will continue to rise, as the higher density and thus higher burn rate will more than compensate for the temporary decline in T.