We are into the last echos of the great pine beetle infestation. A couple of cold spells have occurred and much more important all the pine forest that were vulnerable have been destroyed. The only threat now is a cyclical repeat around seventy years from now. That can be handled then by aggressive harvesting in the seventh decade.


Even better we learn how to stagger harvest in order to even out the production, but make sure no stand ever become mature enough to allow the pine beetle a foothold. We learned something this time around and it is how to properly interact with the beetle and the forest itself in order to optimize production and provide good husbandry.


This item is unsurprising as the tree exudes volatiles to fend off attacks. The air becomes full of complex gases and fine wood dust.


As we learned once again, there is little human intervention can do when one of these infestations gets going unless we are simply lucky. 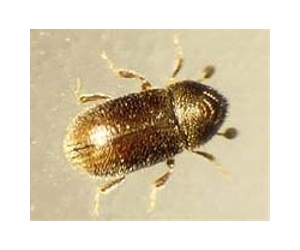 
To determine exactly how beetle attacks affect the atmosphere, the researchers measured VOC levels in the air near healthy and infected pine trees.


The hordes of bark beetles that have bored their way through more than 6 billion trees in the western U.S. and British Columbia since the 1990s do more than damage and kill stately pine, spruce and other trees.


A new study finds that these pests can make trees release up to 20 times more of the organic substances that foster haze and air pollution in forested areas. It appears in ACS' journal Environmental Science and Technology.


Kara Huff Hartz, Gannet Hallar and colleagues explain that western North America is experiencing a population explosion of mountain pinebeetles, a type of bark beetle that damages and kills pines and other trees. The beetles bore into the bark of pine trees to lay eggs.


Gases, called volatile organic compounds (VOCs), which act as defense mechanisms against the beetles, are released from the bore holes. VOCs, however, also contribute to the smog and haze that obscures views of natural landscapes in U.S. National Parks and other nature areas where tourists gather in the summertime.


To determine exactly how beetle attacks affect the atmosphere, the researchers measured VOC levels in the air near healthy and infected pine trees.


They found that beetle-infested trees release up to 20 times more VOCs than healthy trees near the ground surface. The predominant type of VOC was a monoterpene called B-phellandrene.


The data suggest that the bark beetle epidemic in the western U.S. could have led to higher monoterpene concentrations in the air that can contribute to haze, which can harm human health, reduce visibility and impact climate, say the researchers.

Forestry News - Global and Local News, Science and Application
Posted by arclein at 12:00 AM