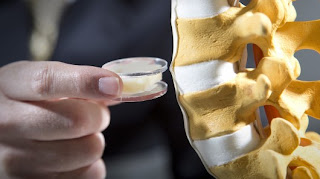 It appears we may finally have a solution for damaged spines. The actual surgery is pretty scary as it is way to easy to cut significant nerves while installing such a device. Otherwise it is a new option that like knee replacement will soon become common enough to have special facilities involved as happened to joint repair and laser eye surgery.

I also suspect that improvements will come quickly as the problem is simply huge and victims are highly motivated.

Beyond all that we are also entering a world in which the collagen can be formed up to replace the damage and stem cells infiltrated to rebuild the bone and anything else.

Thus holding off as much as possible may be desirable in the majority of cases.

The soft, collagen-rich shock absorbers in our backs, known as intervertebral discs, both add to our height (a full quarter of the spinal column's total length) and cushion our vertebrae from contacting one another. Unfortunately, aging, accidents and overuse can damage them and lead to the costly phenomenon of chronic back pain – roughly US$100 billion is spent annually on treatment in the U.S. alone.Replacement of damaged discs, rather than spinal fusion, is an option that's growing in popularity, especially because it helps maintain mobility in the spine. Now, a team from Brigham Young University (BYU) has unveiled their new artificial disc, a compliant mechanism that they believe has the potential to restore quality of life to millions of those with injured spines.
Designed by BYU engineering professors Anton Bowden, Larry Howell and former BYU student Peter Halverson, the jointless elastic device is flexible enough to allow movement, but durable enough to withstand the sometimes crushing pressures that build up between the vertebra of the spine. The team's study will be published in an upcoming issue of the International Journal of Spine Surgery.

“Low back pain has been described as the most severe pain you can experience that won’t kill you,” Bowden said. “This device has the potential to alleviate that pain and restore the natural motion of the spine – something current procedures can’t replicate.” Spinal fusion, currently the most common procedure in addressing damaged discs, leaves more than half of patients dissatisfied, likely due to the drastic reduction in mobility it causes.
BYU engineering professors Anton Bowden (left) and Larry Howell (right) examine their artificial disc implant

Howell is a leading expert in compliant mechanisms – deformable devices such as archery bows and tweezers. He and Bowden had student engineers construct various prototype discs which they first tested mechanically and then in spines removed from cadavers.

“To mimic the response of the spine is very difficult because of the constrained space and the sophistication of the spine and its parts,” Howell said. “A compliant mechanism is more human-like, more natural, and the one we’ve created behaves like a healthy disc.”

BYU licensed the technology to Utah-based company Crocker Spinal Technologies, which plans to develop the product for market release as early as next year. That's potentially welcome news for the many who currently pay the stiff price of chronic back pain.
Posted by arclein at 12:00 AM