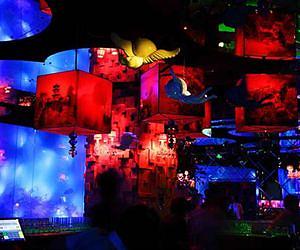 The liberalization of the arts in China continues apace, well ahead of the protection of individual freedoms. It is all part of a transition into modernism and is a function of the increasingly vested nature of Chinese society. It is to be lauded and to be cheered while patience needs to be exercised as the emergence is paced. No one wishes to trigger a counter reaction.

Mass demonstrations and party politics makes headlines, but cultural input informs society as a whole and is often way more important. The Chinese people are throwing of the shackles of the past as they prosper and expressing it all as we do. Through the music we listen to.

Expect to hear more from these players as new stars are promoted.

After decades struggling with official censorship, China's contemporary music scene is finally taking off, fuelled by live shows, the Internet and a government eager to cash in on a growing market.

Chinese indie bands came late to the music scene, largely missing out on the lucrative days of vinyl records, cassettes and compact discs, and also suffered enormously from state broadcasters' preference for pop.

But from rock to rap and hip hop to grunge, the independent music scene has blossomed in recent years as the Internet and an explosion in live venues have given an outlet to acts long shunned by state-run television and radio.

"Since I have been here, everything has changed," said Helen Feng, the lead singer of the electronica band Nova Heart who returned to her native Beijing in 2003 and has just finished a European tour.

Born in Beijing to Chinese parents, Feng, 34, spent most of her childhood in the United States where she was raised on the likes of Natalie Cole and George Gershwin, eventually graduating from University of Southern California where she minored in music.

Since returning to China, the blonde diva has been at the centre of the Beijing music scene, fronting three different successful bands, while working jobs with state radio and television and American music video giant MTV.

Feng, whose bands have toured throughout China, playing numerous outdoor music festivals, says there is no longer much government antipathy to modern music -- something veteran music producer Kenny Bloom agrees with.

"The government has become supportive of the music industry... no one is banned in China and no one is arrested for singing a song, at least not to my knowledge," said Bloom, who runs an Internet platform promoting Chinese indie bands.

While available sales data is thin, bands get by on what they make from concerts and fairly low-level CD sales in a market notorious for piracy.

Bloom said many of the around 100 music festivals that now take place in China every year were sponsored by local governments eager to showcase their local enterprises, bolster regional tourism and let the music industry grow.

"The fact that they give licences to all these music festivals is a great indicator... they are letting these big festivals take place... with up to 60,000 people going to them. And nobody seems to mind."

Bloom used to produce albums for Cui Jian, one of China's biggest music stars and known as the "Godfather of Chinese rock and roll".

He set up Mogo.com.cn in 2009 to promote independent music in China and the website now features footage of thousands of live performances from about 300 indie bands, which users can access for free.
At the moment the site is mainly used by industry insiders and musicians themselves, but Bloom plans to introduce presenter-led programming that would appeal to a broader audience.

To build up content, he has a simple arrangement with the bands: they allow him to professionally record their performances in his cramped Beijing studio for free and he uploads it up to his website without charge.

"The Mogo Internet platform is really cool ... it is a professional video site. It allows us to see what other bands are doing," Qi Zihan, lead singer of the electronic folk band Mountain People told AFP at the Mogo studio.

After 10 years of constant touring, Mountain People -- from the mountainous southwestern province of Yunnan -- have become renowned for their amped-up traditional Chinese instruments and energy-packed shows.

As well as becoming a favorite band in Beijing, the Mountain People are revered in their home province of Yunnan and regularly tour overseas.

"Years before, the music was restricted in China, but now things are better," Qi said.

Meanwhile, bands are smart enough to know that mixing music with sensitive political issues could be a fast way to end a career, Bloom said.

"There are thousands of bands, indie bands, hiphop bands, ethnic bands that are really pushing the envelop in music. They are starting to write great songs, their arrangements are good, they are playing better," Bloom said.

"The bands aren't stupid, they want to play music, the fans want to hear music, it is nothing more complicated than that. Not everything has to be political, music is music."