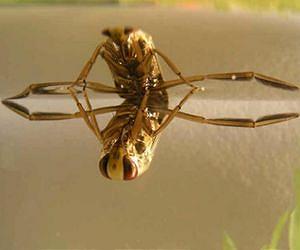 Submarines are now beginning to become common place and this technology opens the door to near friction less operation in the water, even if it is only applied to specialist surfaces as we see holding true in nature. It becomes much easier to employ multiple glide planes if friction is largely eliminated.

I can see a scenario in which the operator attaches such planes and devices just before operation and removes them afterward to preserve integrity.

I suspect it is now feasible to produce a submarine whose failure modes all result in the vessel surfacing while providing comfort and excellent vision to the occupants during operation on a near auto pilot basis. From there mass production become plausible and low costs possible.

A low friction capacity that is robust would make sub sea commuting a possibility also and create a huge market.

The water boatman can swim freely and breathe in water. The study showed that the superhydrophobicity of the water boatman's hind wings plays a crucial role in its swimming, breathing, and balance, as well as its ability to escape from the water surface under unfavorable conditions.


Superhydrophobicity is one of most important interfacial properties between solids and liquids. SHI Yanlong and his group from the College of Chemistry and Chemical Engineering, Key laboratory of Hexi Corridor Resources Utilization of Gansu Universities, Hexi University investigated the superhydrophobicity of the water boatman's hind wings.

Research on superhydrophobicity has seldom focused on insects that live in water. In this report, the authors investigated the water-dwelling water boatman, which belongs to the Corixidae family of the order Hemiptera, suborder Heteroptera.

The water boatman can swim freely and breathe in water. The study showed that the superhydrophobicity of the water boatman's hind wings plays a crucial role in its swimming, breathing, and balance, as well as its ability to escape from the water surface under unfavorable conditions.

Superhydrophobic surfaces are usually induced because of the synergistic effects of hierarchical micro/nanoscale binary structures and low surface free energy. Scanning-electron microscopy studies of the micro/nanoscale structure revealed that the surface of the water boatman's hind wings is composed of mastoids and nanorods with diameters of about 80nm and 50-100nm, with typical mastoid-to-mastoid and rod-to-rod distances of about 50-200nm and 300-1000nm, respectively.

Moreover, the insect's wing surface contains low surface energy protein, lipid, and chitin materials, which are hydrophobic. The superhydrophobicity of the water boatman's hind wings is presumed to originate from the combination of such a hierarchical surface structure together with hydrophobic materials contained on the wing. Water contact angles on the wing surface were measured to be 159 degrees and the glide angle was about 8 degrees.

According to Cassie's theory, contact between water droplets and the water boatman's hind wings is a composite contact of solid-liquid-gas. On the rough hierarchical surface, air can be trapped within the micro/nanoscale structures on the wing surface, which makes it difficult for water to enter into the structures to fully wet the surface.

The superhydrophobicity of the water boatman's hind wings enables it to swim freely, breathe in water with the assistance of air trapped on its hind wings' surfaces, and escape easily from water area under unfavorable conditions without being affected by moisture.

This research may provide a new strategy for submarine design and the fabrication of a water boatman robot which could swim in water and walk on water surface. Water boatman robots with strong wave resistance and high walking stability on water could be outfitted with miniature biochemical sensors , the biomimetic boatman robots may be used to monitor chemicals at water area for environmental monitoring and cleaning applications, and can be teleoperated or controlled autonomously.