Contemporaneous Primate Evolution 40my Ago 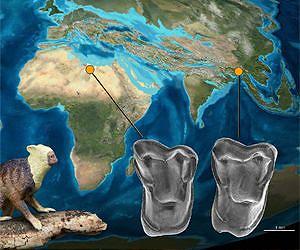 We discover that two sets of teeth in Africa and in Burma that are contemporaneous and closely related and now we know that the progenitors of the primates made it to Africa around 40,000,000 years go plus or minus a couple of million years. It is also good news when we can lock down a benchmark in geological time. Now we can say before and after with some authority and little else of course, but that is useful.

We are steadily discovering fossils for the multiple lines of primates that arose and in due time the lines of hominids. I do not think that such work is yet complete although it probably is in terms of the salient hominids that we are going to locate.

This work describes the process rather well and what it entails. Little glamor here.


An international team of researchers has announced the discovery of Afrasia djijidae, a new fossil primate from Myanmar that illuminates a critical step in the evolution of early anthropoids-the group that includes humans, apes, and monkeys.
The 37-million-year-old Afrasia closely resembles another early anthropoid, Afrotarsius libycus, recently discovered at a site of similar age in the Sahara Desert of Libya. The close similarity between Afrasia and Afrotarsius indicates that early anthropoids colonized Africa only shortly before the time when these animals lived.
The colonization of Africa by early anthropoids was a pivotal step in primate and human evolution, because it set the stage for the later evolution of more advanced apes and humans there. The scientific paper describing the discovery appears in Proceedings of the National Academy of Sciences.
For decades, scientists thought that anthropoid evolution was rooted in Africa. However, more recent fossil discoveries in China, Myanmar, and other Asian countries have rapidly altered scientific opinion about where this group of distant human ancestors first evolved. Afrasia is the latest in a series of fossil discoveries that are overturning the concept of Africa as the starting point for anthropoid primate evolution.
"Not only does Afrasia help seal the case that anthropoids first evolved in Asia, it also tells us when our anthropoid ancestors first made their way to Africa, where they continued to evolve into apes and humans," says Chris Beard, Carnegie Museum of Natural History paleontologist and member of the discovery team that also included researchers from Myanmar, Thailand, and France. Beard is renowned for his extensive work on primate evolution and anthropoid origins.
"Afrasia is a game-changer because for the first time it signals when our distant ancestors initially colonized Africa. If this ancient migration had never taken place, we wouldn't be here talking about it."
Timing is everything

Paleontologists have been divided over exactly how and when early Asian anthropoids made their way from Asia to Africa. The trip could not have been easy, because a more extensive version of the modern Mediterranean Sea called the Tethys Sea separated Africa from Eurasia at that time.
While the discovery of Afrasia does not solve the exact route early anthropoids followed in reaching Africa, it does suggest that the colonization event occurred relatively recently, only shortly before the first anthropoid fossils are found in the African fossil record.
Myanmar's 37-million-year-old Afrasia is remarkable in that its teeth closely resemble those of Afrotarsius libycus, a North African primate dating to about the same time. The four known teeth of Afrasia were recovered after six years of sifting through tons of sediment near Nyaungpinle in central Myanmar.
This locality occurs in the middle Eocene Pondaung Formation, where the same international research team discovered Ganlea megacanina, an influential fossil described in 2009 that helped solidify the presence of early anthropoid primates in Asia.
Details of tooth shape in the Asian Afrasia and the North African Afrotarsius fossils indicate that these animals probably ate insects. The size of their teeth suggests that in life these animals weighed around 3.5 ounces (100 g), roughly the size of a modern tarsier.
Because of the complicated structure of mammalian teeth, paleontologists often use them as fingerprints to reconstruct how extinct species are related to each other and their modern relatives.
These similarities provide strong evidence that Afrasia's Asian cousins colonized North Africa only shortly before the appearance of Afrotarsius in the African fossil record. If Asian anthropoids had arrived in North Africa earlier, there would have been time for more differences to evolve between Afrasia and Afrotarsius.
The close similarity in age and anatomy shared by the two species makes Afrasia a touchstone in the quest to date the spread of anthropoid primates from Asia to Africa.
"For years we thought the African fossil record was simply bad," says Professor Jean-Jacques Jaeger of the University of Poitiers in France, the team leader and a Carnegie Museum research associate. "The fact that such similar anthropoids lived at the same time in Myanmar and Libya suggests that the gap in early African anthropoid evolution is actually real. Anthropoids didn't arrive in Africa until right before we find their fossils in Libya."
Implications for future research

The search for the origin of early anthropoids-and, by extension, early human ancestors-is a focal point of modern paleoanthropology. The discovery of Afrasia shows that one lineage of early anthropoids colonized Africa around 37?? million years ago, but the diversity of early anthropoids known from the Libyan site that produced Afrotarsius libycus hints that the true picture was more complicated.
These other Libyan fossil anthropoids may be the descendants of one or more additional Asian colonists, because they don't appear to be specially related to Afrasia and Afrotarsius.
Fossil evidence of evolutionary divergence-when a species divides to create new lineages-is critical data for researchers in evolution. The groundbreaking discovery of the relationship between Asia's Afrasia and North Africa's Afrotarsius is an important benchmark for pinpointing the date at which Asian anthropoids colonized Africa.
"Groundbreaking research like this underscores the vitality of modern natural history museums," says Sam Taylor, director of Carnegie Museum of Natural History. "Research like this can only be sustained by the irreplaceable collections, curatorial expertise, and scientific infrastructure that natural history museums provide. At the same time, cutting-edge science like this revitalizes our museum's educational programs and propels its mission."
"Reconstructing events like the colonization of Africa by early anthropoids is a lot like solving a very cold case file," says Beard. "Afrasia may not be the anthropoid who actually committed the act, but it is definitely on our short list of prime suspects."
Posted by arclein at 12:00 AM