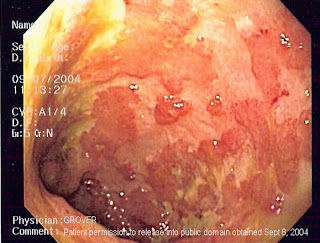 The obvious take home is to shift your diet away from milk fat in particular to start with and see if it does any good.  This requires a lot of care in terms of processed food but we knew that anyway.  It is just not obvious which processed food contains milk fat and it has never been much of an issue.

I suspect that this clue will lead to other strong suggestions.  I would try a vegan diet without any milk products or fat to see if the condition itself can be allowed to heal and perhaps to settle down.  If that actually does happen, then I would try out low levels of the problem products to see if tolerance is possible.  It is not perfect but a protocol of moderate usage does give one ample flexibility.

It is also a warning to all of us that excessive use of some of our favorites such as ice cream could plausibly bite back more than one anticipates.  The rule has always been moderation but as we learned in the wheat business, the core product may be simply too much part of processed foods to easily avoid.

I am becoming progressively less enamored with process foods in general and have always tried to minimize their availability in my food solutions anyway.  We all need to be at least as touchy on the subject.  My favorite rule is one portion per month at best to prove I am not a fanatic.

Newswise — Certain saturated fats that are common in the modern Western diet can initiate a chain of events leading to complex immune disorders such as inflammatory bowel diseases (IBD) in people with a genetic predisposition, according to a study to be published early online in the journal Nature.

The finding helps explain why once-rare immune-mediated diseases have become more common in westernized societies in the last half century. It also provides insights into why many individuals who are genetically prone to these diseases are never affected and how certain environmental factors can produce inflammation in individuals already at risk.

Researchers at the found that concentrated milk fats, which are abundant in processed and confectionary foods, alter the composition of bacteria in the intestines. These changes can disrupt the delicate truce between the immune system and the complex but largely beneficial mix of bacteria in the intestines. The emergence of harmful bacterial strains in this setting can unleash an unregulated tissue-damaging immune response that can be difficult to switch off.

“This is the first plausible mechanism showing step-by-step how Western-style diets contribute to the rapid and ongoing increase in the incidence of inflammatory bowel disease,” said study author Eugene B. Chang, MD, PhD, the Martin Boyer Professor of Medicine at the . “We know how certain genetic differences can increase the risk for these diseases, but moving from elevated risk to the development of disease seems to require a second event which may be encountered because of our changing lifestyle.”


The researchers worked with a mouse model that has many of the characteristics of human IBD. Genetically deleting a molecule, interleukin 10, which acts as a brake on the immune system’s response to intestinal bacteria, caused about 20 percent of mice to develop colitis when fed a low-fat diet or a diet high in polyunsaturated fats. But when exposed to a diet high in saturated milk fats, the rate of disease development within six months tripled, increasing to more than 60 percent. In addition, the onset, severity and extent of colitis were much greater than that observed in mice fed low-fat diets.

Why would milk fat — a powdered substance that remains when fat has been separated from butter and dehydrated — trigger inflammation when polyunsaturated fat did not? The researchers traced the answer to the gut microbiome, the complex mix of hundreds of bacterial strains that reside in the bowels.

The researchers found that an uncommon microbe called Bilophila wadsworthia was preferentially selected in the presence of milk fat. Previous studies had found high levels of B. wadsworthia in patients with appendicitis and other intestinal inflammatory disorders, including inflammatory bowel disease.

“That piqued our interest,” Chang said. “These pathobionts, which are usually non-abundant, seem to be quite prominent in these diseases.”

Indeed, while Bilophila wadsworthia levels were almost undetectable in mice on a low-fat or unsaturated-fat diet, the bacteria made up about 6 percent of all gut bacteria in mice fed a high milk-fat diet.

“Here we show how the trend in consumption of Western-type diets by many societies can potentially tip the mutualistic balance between host and microbe to a state that favors the onset of disease,” Chang said.

As its name implies, Bilophila wadsworthia has an affinity for bile, a substance produced by the liver and released into the intestines to help break down ingested fats. Milk fats are particularly difficult to digest and require the liver to secrete a form of bile that is rich in sulfur. B. wadsworthia thrives in the presence of sulfur. So when the bile created to dissolve milk fats reaches the colon, it enables wadsworthia to blossom.

“Unfortunately, these can be harmful bacteria,” Chang said. “Presented with a rich source of sulfur, they bloom, and when they do, they are capable of activating the immune system of genetically prone individuals.”

The byproducts of B. wadsworthia’s interaction with bile also can amplify the effect. They serve as “gut mucosal barrier breakers,” said Suzanne Devkota, PhD, a member of Chang’s laboratory and first author of the study. “By increasing the permeability of the bowel, they enhance immune-cell infiltration, and that can induce tissue damage.”

Much of the recent progress in understanding the biology of inflammatory bowel disease has focused on gene variants that can increase risk, beginning with the discovery in 2001 of Nod2 by researchers at the . But the new study puts the focus on changing environmental factors that might trigger the disease in high-risk patients.

“Right now we can’t do much about correcting genes that predispose individuals to increased risk for these diseases,” Chang said, “and while we could encourage people to change their diets, this is seldom effective and always difficult.”

“However, the balance between host and microbes can be altered back to a healthy state to prevent or treat these diseases,” he added. “In essence, the gut microbiome can be ‘re-shaped’ in sustainable and predictable ways that restore a healthy relationship between host and microbes, without significantly affecting the lifestyles of individuals who are genetically prone to these diseases. We are testing that right now.”

The National Institutes of Health, the Gastrointestinal Research Foundation, the Crohn’s & Colitis Foundation of America, the Peter D. and Carol Goldman Foundation, and the Leona M. and Harry B. Helmsley Charitable Trust supported this research. Additional authors include Yunwei Wang, Mark Musch, Vanessa Leone, Hannah Fehlner-Peach, Anuradha Nadimpalli and Bana Jabri from the University of Chicago, and Dionysios Antonopoulos from the Institute for Genomics and Systems Biology at Argonne National Laboratory.
Posted by arclein at 12:00 AM