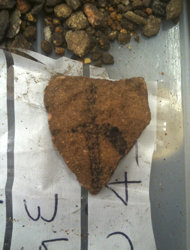 This is worth noting. It is time to consider the ramifications of 45,000 years of activity in Australia and in fact globally. I have already concluded that modern man emerged seriously from its stone age tool kit around 45,000 years ago. Such an emergence would be in the same time frames we have experienced during the past five thousand years. Once begun it becomes unstoppable and effective at penetrating every valley on Earth with the stone age tool kit at least.

The first emergence exploited the then sea level continental shelf world wide in the both the tropics and even the sub tropics. Technology man emerged there and in time established a presence in space. Neanderthals joined in this civilization as others would. The uplands were blasted by violent weather and ferocious wildlife and remained the preserve of stone age hunters as we today leave the Arctic to the Aleut as much as we can.

Australia is actually the one continental landmass besides Africa that could come through the Pleistocene Nonconformity in decent condition and retaining a fairly intact human population. The clues we have to the present suggests that we look harder there in any case and assume nothing.

http://news.yahoo.com/archaeologist-finds-oldest-rock-art-australia-134339160.html
CANBERRA, Australia(AP) — An archaeologistsays he found the oldest piece of rock art in Australia and one of the oldest in the world: an Aboriginal work created 28,000 years ago in an Outback cave.

The dating of one of the thousands of images in the Northern Territory rock shelter known as Nawarla Gabarnmang will be published in the next edition of the Journal of Archaeological Science.

University of Southern Queensland archaeologist Bryce Barkersaid Monday that he found the rock in June last year but only recently had it dated at New Zealand's University of Waikato radiocarbon laboratory.

He said the rock art was made with charcoal, so radiocarbon datingcould be used to determine its age. Most rock art is made with mineral paint, so its age cannot be accurately measured.

"It's the oldest unequivocally dated rock art in Australia" and among the oldest in the world, Barker said.

The oldest known rock art is in Spain, where hand stencils and red disks made by blowing paint on to the wall in El Castillo cave are at least 40,800 years old, according to scientists using a technique known as uranium-thorium dating.

Australian National University archaeologist Sally May, who is not involved with Barker's research, described his find as "incredibly significant."

"I don't think it will surprise anyone that rock art is that old in Australia because we know people have been here a lot longer than that and there's no reason to believe they weren't producing art," she added.

Barker said he found evidence that the cave where he found the rock art had been occupied for 45,000 years.
Posted by arclein at 12:00 AM