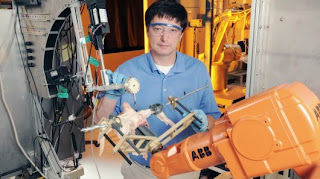 I was not aware that robotic meat cutting is well on the way to been realized. This is excellent news as it will end the rush to the bottom in terms of industry employment. The industry will then segregate into quality cutting and factory cutting and separate price structures which has already happened but has nor been acknowledged.
It will not be just chickens either, but all parts of the meat industry.
It is reasonable that this technology will quickly evolve into an all purpose piece of automated hardware that simply takes up a carcass and swiftly processes it. The three components apply right across the whole spectrum and it becomes a matter of programming and correct scale.
In time it could become cheap enough that it can become part of small operation able to support local farms. 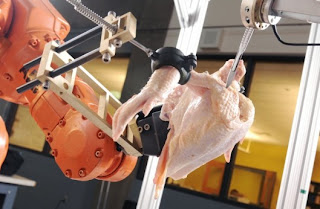 Chickens have another reason to lose sleep thanks to roboticists at the Georgia Tech Research Institute’s (GTRI) Intelligent Cutting and Deboning System. Using 3D imaging technology, this robot can debone an entire chicken with the skill of a human butcher and has the potential of saving the poultry industry millions of dollars by reducing costs and waste.

Chickens are big business. In the United States alone 8.7 billion chickens are processed every year. That’s 36 billion pounds (16 billion kg) of poultry of which the average American consumes 50 pounds (23 kg). On such a scale, costs due to inefficient processing and the need for skilled labor adds up very quickly. Over the years, the meat industry have managed to automate many tasks so that, for example, making bacon is now a largely hands-off affair, but chickens are very irregularly and individually shaped, so automation has passed them by, until now.

Robots have made a number of inroads into the meat processing industry as part of this push towards automation. A Japanese company has recently developed a robot that uses an x-ray scanner to help it debone hams and another robot cleanly removes chicken breasts at a rate of thousands per day, but the GTRI team is using a robot to automate the entire chicken deboning process.

The GTRI robot, called the “Intelligent Cutting and Deboning System,” uses a 3D vision system that operates on the fact that the internal structure of a chicken corresponds closely to its outer appearance. So far so good, but chickens vary a lot from one another, so something more sophisticated is needed.

"Each bird is unique in its size and shape, so we have developed the sensing and actuation needed to allow an automated deboning system to adapt to the individual bird, as opposed to forcing the bird to conform to the machine," says Gary McMurray, chief of GTRI's Food Processing Technology Division.

What this means in practice is that the robot visually seeks out fixed landmarks on the chicken and uses these as part of an algorithm that estimates the internal structure of the chicken and plans the cuts. These cuts are designed to be precise with the intention of maximizing the amount of meat removed and minimizing the number of bone fragments. This is achieved by the robot’s two arms. One is a cutting arm with two degrees of movement and the other is a holding arm with six degrees of movement. In concert, these arms allow the robot to position the chicken and make the required cuts.

But this wouldn’t be of much help without the final component. The robot can’t see through the chicken while cutting, so it relies on a sort of mechanical “touch” to see how things are going. The arms include a forced-feedback system that tells the robot when it is meeting resistance, such as a bone or tendon. If it meets a hard resistance, it avoids this as a bone. If the resistance only slows the knife, then it’s a tendon or ligament. With these two cues, the robot can stay close to the bone without chipping it and by knowing when it cuts a tendon or ligament, it can remove the meat cleanly and completely, though this is still something of an art. "Fine tuning is needed to adjust the force thresholds to be able to tell the difference between meat, tendon, ligaments and bone - each of which have different material properties,” said research engineer Ai-Ping Hu.

The chicken-deboning robot is still undergoing testing and development by GTRI under funding by the state of Georgia through the Agricultural Technology Research Program, but one day it could help keep Sunday dinner more affordable.