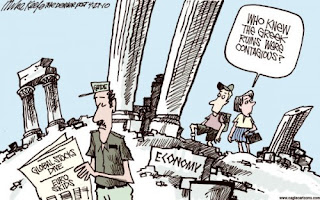 This gives us some sense of just how deep the hole is in Greece. Yet it all comes back to a culture of rampant tax evasion however badly those taxes may be spent. The tax system has to be engineered to work in order for services to be supported and this must take place long before any national debt is addressed.

This means that Greek debt is presently worthless and payments of interest highly unlikely for a long time unless it is done by the expedient of adding to the principle.

Once again the solution is to make a tax system that is generally bullet proof. I would merely have tax payments collected locally along side full disclosure of how much. Local government would then remit the federal share. All this ends secrecy but it also ends the culture of lying. Better still it soon becomes a source of pride.

The present tragedy is that the system can be fixed and the citizens recapitalized along with the government, but no one who has a clue is anywhere near a position to fix it.

(NaturalNews) The economic situation in Greece is only continuing to worsen, as reports indicate that hospitals and care centers throughout the nation are running completely out of medicines, and many healthcare workers are now voluntarily providing care services without pay.

Strapped with spiraling debt, the Greek healthcare, which is government-run, has had to receive gobs of international financial aid just to keep operating with some semblance of normalcy. There has also been plenty of IOUs issued, and desperate patients quietly forking over cash "gifts" to doctors to receive treatments. All in all, the healthcare situation is in utter chaos, save for those that have sacrificed their own time, often free of charge, just to help those in need.


As we reported here at NaturalNews back in 2010, Big Pharma had already been withholding drugs from Greece because of the country's inability to pay for them. Greek authorities had tried to negotiate with drug companies to lower the exorbitant costs associated with drugs, and some complied. But many others simply stopped shipping in medicines, leaving thousands of ill patients without any options.

Today, the situation has gotten even worse, particularly because the Greek healthcare system heavily relies on brand-name drugs rather than far-less-expensive alternatives. Since the entire system is clogged because of unpaid bills, many pharmacies, for instance, have had to simply close their doors. Those that still remain and continue to supply drugs on credit -- these are few and far between -- are being overwhelmed by long lines of desperate patients seeking life-saving medications.

"We're not talking about painkillers here," said one Greek woman, a cancer survivor, to Reuters. "We've learned to live with physical pain. We need drugs to keep us alive."

MSNBC reports that many hospital workers have been working for a many as five months without pay, including at the Henry Dunant Hospital in Athens, which is owned by the Hellenic Red Cross Foundation. These workers hope to one day receive the backlog of pay they are owed, but because the crisis only appears to be worsening rather than improving, this may not ever happen.

As of this past weekend, the New Democracy Party's Antonis Samaras claimed victory as Greece's new prime minister, ending a seven-week period in which the nation was essentially being ruled by nobody. Much to the chagrin of many Greeks, this new regime plans to stick with the eurozone and pursue more financial bailouts (http://www.nytimes.com).