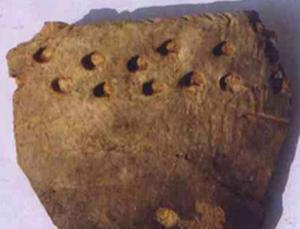 The problem with pottery is that early archeology found mountains of the stuff associated with settled living and made the natural assumption that this was when it was all invented. It made way more sense that hunters would soon learn to work with clay and would find some way to exploit it.

Even using clay to line a basket and simply allowing it to cure could provide a small vessel able to hold water. Hot stones would then do the heating and the clay itself would never exceed boiling temperatures. This sample fits that minimalist model. Of course, all peoples were transitory on the landscape and we simply do not get meaningful middens unless it is at the sea shore. Unfortunately, all those were inundated 13,000 years ago anyway and such as we now have are recent.

Besides, humanity and its predecessors have been using fire for a million years and a water tight container is critical in such cooking if only because much game meat must be cooked for two hours in a stew pot to ease consumption. That is why we lost our powerful jaws.

What was new during the agricultural expansion was fired clay. That took substantial manpower organization in order to produce the charcoal supply. And of course, fired clay will not breakdown so easily either. Thus the mountains of shards.

Did a deep freeze spur our ancestors to get cooking? The discovery that the oldest pots in the world were made in China around the time of the Last Glacial Maximum suggests that might be the case.

Ofer Bar-Yosef of Harvard University and colleagues excavated the cave again in 2009 and, for the first time, used radiocarbon dating to work out the age of the layers where the pottery shards were found. The oldest ones turned out to be between 19,000 and 20,000 years old.

That is thousands of years before people began farming some 12,000 years ago – suggesting that the pots were made by hunter-gatherers, which is contrary to previous thinking. "The making of pottery is not necessarily related to agriculture," says Bar-Yosef.

Bar-Yosef thinks the shards are the remains of crude pots and bowls, probably about 20 centimetres across. "They were poorly fired and easily breakable," he says. Their outer surfaces carry scorch marks and small amounts of soot, so Bar-Yosef thinks they were used for cooking.

His dating data helps to locate the oldest potters, but humans had been manipulating clay into figurines for many years by then. The Venus of Dolní Věstonice, a small statuette of a naked woman found in what is now the Czech Republic is estimated to be about 30,000 years old.

What prompted Chinese hunter-gatherers to start cooking food 20,000 years ago? Bar-Yosef points out that, at the time, Earth was in the clutches of the Last Glacial Maximum, the height of the last ice age.

The extreme cold would have caused food shortages. Cooked food yields more energy than raw food, so throwing their meals on the fire could have helped people to survive. It takes some form of stress for species to undergo major changes, says Bar-Yosef.

A later cold period, the Younger Dryas starting about 12,800 years ago, could have forced people to start farming (Current Anthropology, DOI: 10.1086/659784). Because much of Eurasia was colonised by then, people couldn't escape food shortages by moving to a new area. The only option was to start growing crops.
Posted by arclein at 12:00 AM