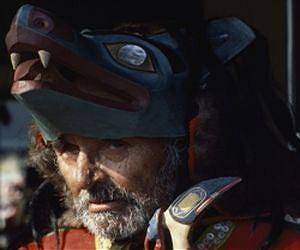 What becomes clear with this work is that the Haida were surely a coastal migration that came by sea along the coast from Japan at least possibly even 20,000 years ago. The Na-Dene were the peoples of Beringia who pushed south and east behind the melting Ice and finally broke out into the southern plains. The Inuit expanded more recently as arctic ice conditions effectively opened up increasing their available range.


We also have an European injection of peoples known as the Solutreans who entered the Americas from the east at much the same time as the Haida. Both shared effective sea going technology.


Cultural history supports the Na Dene as late comers who arrived after the ice disappeared.


This model continues to tighten up quite nicely. It also supports the ready absorption of Indians of the eastern seaboard into the European gene pool in particular and why genetic work there can be somewhat confounding. Multiple generations of intermarriage do allow for specific Indian characteristics to largely disappear which does not happen as easily with the more distinct groups.


Two studies led by scientists from the University of Pennsylvania and National Geographic's Genographic Project reveal new information about the migration patterns of the first humans to settle the Americas. The studies identify the historical relationships among various groups of Native American and First Nations peoples and present the first clear evidence of the genetic impact of the groups' cultural practices.


For many of these populations, this is the first time their genetics have been analyzed on a population scale. One study, published in the American Journal of Physical Anthropology, focuses on the Haida and Tlingit communities of southeastern Alaska. The other study, published in theProceedings of the NationalAcademy of Sciences, considers the genetic histories of three groups that live in the Northwest Territories of Canada.


Establishing shared markers in the DNA of people living in the circumarctic region, the team of scientists uncovered evidence of interactions among the tribes during the last several thousand years. The researchers used these clues to determine how humans migrated to and settled in North America as long as 20,000 years ago, after crossing the land bridge from today's Russia, an area known as Beringia.


"These studies inform our understanding of the initial peopling process in the Americas, what happened after people moved through and who remained behind in Beringia," said author Theodore Schurr, an associate professor in Penn's Department of Anthropology and the Genographic Project principal investigator for North America.


Both papers also confirm theories that linguists had posited, based on analyses of spoken languages, about population divisions among circumarctic populations.


The first paper focused on the Haida and Tlingit tribes, which have similar material cultures.


"They share potlatch, or rituals of feasting, totemic motifs and a type of social organization that is based on matrilineal clans and moieties," Schurr said.


Using cheek-swab DNA samples, the analyses confirmed that the two tribes - although they possessed some similarities in their mitochondrial DNA makeup - were quite distinct from one another. Comparing the DNA from the Tlingit and Haida with samples from other circumarctic groups further suggested that the Haida had been relatively isolated for a significant period of time. This isolation had already been suspected by linguists, who have questioned whether the Haida language belonged in the Na-Dene language family, which encompasses Tlingit, Eyak and Athapaskan languages.


In the clan system of Haida and Tlingit peoples, children inherit the clan status - and territory - of their mothers. Each clan is divided in two moieties, or social groups, for example the Eagle and the Raven in the Tlingit tribe. Traditionally, a person from the Raven clan married someone from the Eagle clan and vice versa.


"Part of what we were interested in testing was whether we could see clear genetic evidence of that social practice in these groups," Schurr said. "In fact, we could, demonstrating the importance of culture in molding humangenetic diversity."


The other paper expands this view of circumarctic peoples to closely consider the genetic histories of three groups that live in the Northwest Territories: the Inuvialuit, the Gwich'in and the Tlicho. The Inuivialuit language belongs to the Eskimo-Aleut language family, while the Gwich'in and Tlicho speak languages belonging to the Na-Dene family and the Athapaskan subgroup.


In this study, the researchers analyzed 100 individual mutations and 19 short stretches of DNA from all individuals sampled, obtaining the highest-resolution Y chromosome data ever from these groups.


The team's results indicate several new genetic markers that define previously unknown branches of the family tree of circumarctic groups. One marker, found in the Inuvialuit but not the other two groups, suggests that this group arose from an Arctic migration event somewhere between 4,000 and 8,000 years ago, separate from the migration that gave rise to many of the speakers of the Na-Dene language group.


"If we're correct, [this lineage] was present across the entire Arctic and in Beringia," Schurr said. "This means it traces a separate expansion of Eskimo-Aleut-speaking peoples across this region."


Many of the native groups who have participated in both studies are also enthusiastic collaborators, Schurr said.


"What we find fits very nicely with their own reckoning of ancestry and descent and with their other historical records. We've gotten a lot of support from these communities."


"Perhaps the most extraordinary finding to come out of these two studies is the way the traditional stories and the linguistic patterns correlate with the genetic data," Spencer Wells, Genographic Project director and National Geographic Explorer-in-Residence, said. "Genetics complements our understanding of history but doesn't replace other components of group identity."


Additional contributors to the American Journal of Physical Anthropology paper are Sergey Zhadanov of Penn, Judy Ramos of the Yakutat Tlingit Tribe, Mary Beth Moss of the Huna Indian Association, Francis Natkong of the Hydaburg Cooperative Association and the Genographic Consortium.


For the Proceedings of the National Academy of Sciences paper, the Penn team worked with Alestine Andre, Ingrid Kritsch, Sharon Snowshoe and Ruth Wright of the Gwich'in Social and Cultural Institute; Crystal Lennie of the Inuvialuit Regional Corporation; Mary Adele Mackenzie, James Martin and Nancy Gibson of the Tlicho Community Services Authority; Thomas Andrews of the Prince of Wales Northern Heritage Center; and the Genographic Consortium. Support for both studies was provided by the National Geographic Society, IBM, the Waitt Family Foundation and the University of Pennsylvania.