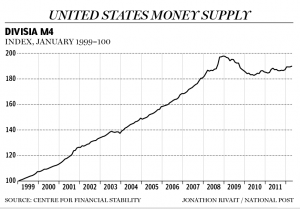 It is really very simple.  If you engineer a loss of credit for several percentage points of the working population, the money supply shrinks.  Until that is somehow reversed, and we are doing it the slow way as was done after 1929 when it took decades to properly recover the credit system itself, we will have anemic money supply growth.

The was quite right to prop up the deflating banking system.  They merely forgot to reset the deflating borrower who is still not whole.  Curiously, got it right.  They did not even try to help the banks but focused on putting the customers back into business.  It is working well.

I called immediately in 2008 for an effective reset in the mortgage business while it would have made the most difference. That did not happen then and is unlikely to happen unless Romney is up to it.  We can still establish four percent internal growth.

The credit loss is even deeper than we imagined and the shrinkage of the money supply is awful.  During this shrinkage there has also been a slowing in the velocity of money also.  What this all means is a complete failure of fiscal policy to stimulate anything.

Worse than all that we are about to increase the government’s take in the economy, just as they did in 1932, just when bad policy has made it all super vulnerable to begin with.

Remember that in four years, the Obama administration has not properly addressed the housing credit collapse nor even really tried, yet it is the first thing that should have been addressed.

Why is now in a credit crunch

Since August 2008, the month before Lehman Brothers collapsed, the supply of publicly produced base money has more than tripled, while privately produced money has shrunk by 12.5% - resulting in a decline in the total money supply (M4) of almost 2%. In consequence, the share of the total broad money supply accounted for by the Fed has jumped from 5% in August 2008 to 15% today.

The post-crisis monetary-policy mix has brought about a massive opening of the public moneysupply spigots, and a significant tightening of those in the private sector. Since the private portion of the broad money supply in the is now five and a half times larger than the public portion, the result has been a decrease in the money supply since the Lehman Brothers collapse. So, when it comes to money in the , policy has been, on balance, contractionary - not expansionary. This is bad news, since monetary policy dominates fiscal policy.

Wrongheaded public policies have put the kibosh on banks and so-called shadow banks, which are the primary private money-supply engines. They have done this via new and prospective bank regulations flowing from the Dodd-Frank legislation, new (more stringent) III capital and liquidity requirements, and uncertainty as to what might do next. All this has resulted in financial repression - a credit crunch. No wonder we are having trouble waking up from this nightmare.

The picture for the eurozone, absent , looks very similar to that of the , while the German picture looks rather healthy. Indeed, 's money supply is above where it would have been if it was growing at a trend rate. This peculiarity is occurring, in part, because hot money is taking flight from places like and and flowing into . This pumps up the German money supply. It's no surprise, therefore, that the German economy is a picture of health relative to the rest of .

This brings us to the Eurosystem's doom loop. It's clear that the sick ones are pleading for an assist from the largest and healthiest one, .

This, of course, is creating a great deal of angst among the Germans. Today, German taxpayers' exposure to the weaker countries represents at least one quarter of 's GDP, and it's rising. Facing a bill like that, German Chancellor Angela Merkel has recently pushed back and stated the obvious: "'s strength is not infinite."

What can be done? For a start, new, excessive bank regulations should be scaled back, or scrapped altogether - particularly when we're in the middle of the worst slump since the Great Depression. Such a roll-back would alleviate financial repression, allowing the banking system to increase the privately produced portion of the broad money supply. Since excessive and untimely regulation is what's holding down broad money growth, this is just what the doctor ordered.

Remember, it's the money supply, stupid.

Steve H. Hanke is a professor of applied economics at The Johns Hopkins University in Baltimore and a senior fellow at the Cato Institute in Washington, D.C.
Posted by arclein at 12:00 AM