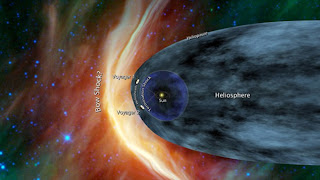 It appears we are in the middle of crossing over into interstellar space. A little heat and new cosmic rays that normally cannot go deep. So for the first time ever mankind is about to sample space outside of the envelop provided by our sun. it took thirty five years to get there. I do not think we are expecting surprises or could measure one if it is encountered. It may be enough to measure to heat of the interface as that becomes a way to detect it from different angles in the future.

And yes, this an achievement easily written up in the history books even though we are not going to stumble into Cuba yet.

I wonder if the baseline between Voyager and Earth can be used to determine the precise speed and direction of the Earth or even if this device was rigged for determining any of that. 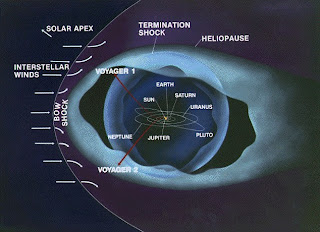 Humanity escapes the solar system: Voyager 1 signals that it has reached the edge of interstellar space - 11billion miles away

14 June 2012
With absolutely no attempt at hyperbole at all, it is fair to say that this is one of - if not the - biggest achievement of the human race.

For, as we speak, an object conceived in the human mind, and built by our tools, and launched from our planet, is sailing out of the further depths of our solar system - and will be the first object made by man to sail out into interstellar space.

Indications over the last week implies that Voyager 1 is now leaving the heliosphere - the last vestige of this solar system.

The probe is still detecting 'spikes' in the intensity of cosmic ray electrons - which lead scientists to think it's still within the 'heliosheath', the very outer edge of our solar system.

The Voyager probe has been travelling towards the outer reaches of the solar system since 1977 - it has enough batteries to last until 2020, scientists estimate

The Atlantic reports that the Voyager 1 - which is still managing to communicate with Earth with radio waves that reach us 16 hours later - is beginning to experience a bit of heat.

It is detecting more energetic particles around it, implying it it at the very edge of the heliosheath, which is like a bubble around the solar system, protecting us from the cosmic winds of deep space. 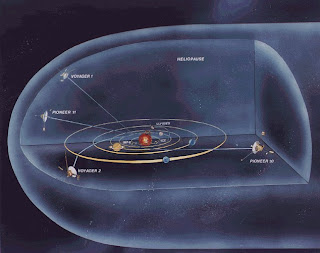 The Voyager entered the heliosphere in 2004

According to The Atlantic, certain cosmic rays have a hard time entering the heliosphere, but as of last month, the sum of these slower particles increased by about 10 per cent.

This does not necessarily mean we have crossed over - but it means we are getting close.

For the past year, Voyager 1 used its instruments to explore the new region. It appeared to be the cosmic doldrums where solar winds streaming out from the sun at 1 million mph have dramatically eased

Voyager scientist Edward Stone told The Atlantic: 'This is the first time any spacecraft has been there.

'We're looking at our data every day - we listen to these spacecraft every day, for a few hours every day - to keep track of what's going on. ... It's very exciting from a scientific point of view, when you're seeing something that nobody's seen before.

'Since nothing's ever been there before, we don't know what it will look like, which makes it a little hard to recognize "it" at all.

It will be hard to define when Voyager has left. It will not be a clean break - the molecules will thin out less, and there will be no wall or set boundary.

What will the Voyager find out there? Probably close to an absolute vacuum, save for a few long-range comets which still orbit the sun.

Scientists expect to see several telltale signs when Voyager 1 finally crosses the boundary including a change in the magnetic field direction and the type of wind.

Interstellar wind is slower, colder and denser than solar wind.


Read more: http://www.dailymail.co.uk/sciencetech/article-2159359/Humanity-escapes-solar-Voyager-1-signals-reached-edge-interstellar-space.html#ixzz1yAXBN6y9
Posted by arclein at 12:00 AM