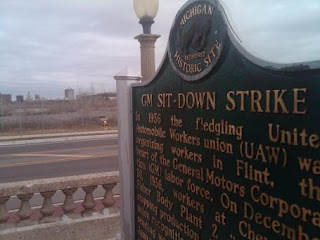 The problem is that like industry occasionally, the labor union has achieved monopoly and then gone out and gamed that monopoly to the disadvantage of shareholders and taxpayers. Then one morning they all wake up to no pension plan and/or no jobs as the ultimate paymasters go on revolt.

Scott Walker confronted the problem and tackled it in the only way possible. He rewrote the contracts to reflect what was real and possible. More important he shut down the backdoor financing of the Union's political friends.

This is really only the beginning. The federal unions are beginning to feel the heat in Canada and it is a surety that non compliment provinces will soon feel the same heat. Here it will be incremental. All I know is that a government job meant accepting less pay forty years ago and that today it means accepting a twenty percent raise.

The USA does not have the luxury of time and choices that Canada has.

There is without question a place for unions in the workplace, but there is no place for union monopoly and financial gaming of pension funds and the like.

I personally think that an universal wage standard is called for as well as universal benefits to end the local gaming of labor as a method to squeeze profits. Such a standards can also be linked directly to welfare stipends and meaningful inflation adjustments so that thousands of negotiations do not trip on the same issues. Just as obviously premiums can be paid in 'temporary circumstances but everyone knows then that his rate is predetermined and the effort is to earn a premium that can be discontinued as conditions change.

It is a problem that needs to be better worked out and the gaming must end without simply destroying the shareholders of GM.

Ann Coulter on the right and Rachel Maddow on the left agree Wisconsin’s vote this Tuesday on recalling Gov. Scott Walker is going to have national implications. They’ve got that right.

If Walker wins, it will encourage Republican governors around the nation to enact more laws that diminish the power of public worker unions. Those efforts usually involve stripping unions of collective bargaining rights in an effort to shut off the money flowing from unions to Democrats.

Since the 2010 midterm elections, GOP governors have been intent on closing off the flow of cash from taxpayers to public sector unions which then support Democratic candidates.

In trying to choke the life out of unions, those governors have had varied degrees of success. But if Walker wins, governors like Michigan’s Rick Snyder, Ohio’s John Kasich and Pennsylvania’s Tom Corbett will find new pockets of money and political support for their anti-union fight.

By the same logic, if the unions cannot defeat an unpopular GOP governor whose policies have threatened their power – and their very existence in one of the most pro-union states in the country - Republicans and Democrats alike will perceive them as weak. The state’s labor unions – including the AFL-CIO, AFSCME and the SEIU – could not get their favorite candidate, Kathleen Falk, nominated as the candidate to run against Walker. That was a loss among fellow Democrats. Meanwhile the unions are being outspent by Walker’s camp, which is playing with a bankroll of $30 million compared to his challenger’s $4 million. The Democratic Party and left-wing groups have not matched the financial punch from the right.

The state’s leading Democrats, Sen. Herb Kohl and Sen. Russ Feingold, both took a pass on running against Walker.

President Obama’s campaign has given the union fight a cold shoulder, too, not wanting to be associated with a possible defeat.

On the other side, Gov. Walker is getting big help from right-wing groups. They include Americans for Prosperity, the conservative group bankrolled by the billionaire Koch Brothers. AFP has helped Walker with a $3-million ad campaign.

Walker has also added financial support for his fight against the recall from billionaire Republican donors outside the Badger State, like Nevada’s Sheldon Adelson.

The result is that Walker has a tremendous cash advantage over Barrett.

Win or lose, the outcome will also leave a mark on the nationwide argument over pay and rights for public employees - part of the debate about the future of the middle class, the size of government, taxes and spending.

That conversation is at the heart of the forthcoming presidential contest between President Obama and the GOP’s nominee, Mitt Romney.

If Walker survives, then Romney immediately inherits an energized GOP base in the state and improves his odds to win Wisconsin this November.

But what happens if the union-backed Barrett, Milwaukee’s mayor, stages a comeback from polls that show him trailing and wins the statehouse in Madison?

It will be a tremendous affirmation of labor’s political power to organize and mobilize voters despite Republican opposition.

The unions have put muscle into this fight from the start.

Their loud, large rallies in Madison got national attention and pushed the governor’s approval ratings down to 42 percent in his first year in office. And the unions surprised the governor by getting almost twice the number of required signatures to put the recall measure on the ballot.

Walker has had to put time and energy into restoring his popularity. The most recent survey from PPP, a liberal polling outfit, has his approval rating at 49 percent with 47 percent disapproval.

But it is the power of the unions that put Walker in position to become only the third governor in American history to be recalled.

A poll of likely voters taken last week by Marquette University in Wisconsin gave Walker a seven-point lead over Barrett, 52 to 45. Another survey of likely voters by Lake Research, a Democrat polling firm, found the two candidates tied - each with 49 percent. Democrats argue the race is getting tight.

Pollsters note that recall elections are extremely difficult to poll because of the unique dynamics of the race.

This is why the polls taken in the run-up to the 2003 California recall that ousted incumbent Gray Davis, were so erratic.

Former President Bill Clinton agreed to come to Wisconsin in the final days of the campaign in a last-ditch effort to help Barrett and, more importantly, the unions.

This fight is about the future of America’s public sector unions. In modern politics they remain the most reliable counterpunch to corporate money and organizing efforts on the right.

That’s why history will note what happens in Wisconsin on Tuesday.