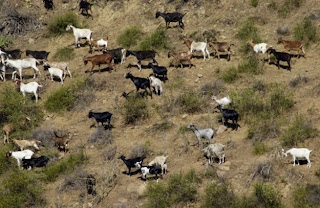 In order to properly exploit pasture land, a goat herd needs to be big enough to justify a shepherd and that large herd needs access to ample pasture land. Here we have a delightful case in which government needs match the needs of a herd along with a diverted cash component to underwrite the process.

What it needs now is a little sponsorship and perhaps long term contracts for herds. This gives the surety needed for the stock-men to go at it.

Plenty of crops have a weed problem that could be handled in this way also. What is needed again is accepted standards and herd availability. My own experiences with raspberries tells me that industry may well be prospective if one can time it so they do not eat the green canes.

The other animals that are valuable are geese and ducks. Again all this is long known and what has been missing is a thought out business model that integrates the needs of the community. At least it is starting.

A Canadian goat farmer is using an innovative and cost-effective way to fight invasive weeds, which he hopes will be widely adopted across the country.

This week he is in B.C.’s Peace Country with 600 of his goats, along with his wife and five dogs, to tackle an infestation of Dalmatian toadflax, a highly invasive weed that has taken hold along the hillside of the Peace River.

Until people understand how it works they’re hesitant to try it. But once they try it, they realize how well it works.

Linblom was hired by the Peace River Regional District after goat grazing became the only option left to remove the toadflax and prevent it from encroaching on surrounding agricultural crops.
“It’s close to a residential area, so they can’t use their helicopter to spray [chemicals]. And also it’s such a steep hillside that they can’t get people to spray by hand. So that’s how come they contacted us,” he says.

“Now they realize that there’s other areas that the goats would do well at too, because we can compete with the cost of spraying and whatnot with our goats—they will do as good or better job.”

Lindblom, who has 1,000 goats and has been in the business for 12 years, says there are a number of benefits to goat grazing. Since goats have a preference for weeds, they will eat the pesky plants before going for grass and other vegetation.

The goats are moved from place to place until the all the unwanted weeds in a given area have been gobbled up. This is his second stint in the Peace River area with his goats.

“We’re going to graze it while it’s in blossom and it will stress the plant out if we keep grazing it down so it can’t go to seed. And by doing that about three years in a row we can kind of eliminate the toadflax,” he says.
\
Goats act as sustainable weed killers, Lindblom notes—starting with their efficient digestion.

“Their digestive system is such that if they eat a plant that has gone to seed they will digest the seeds so the seeds won’t grow when they pass through them.”

In addition, their droppings act as fertilizer for other plants, and goat grazing is 100 percent chemical-free, making the method environmentally friendly. They can also eat plants that are toxic to other animals.

Although prescribed goat grazing is becoming more common in the U.S., it is almost non-existent in Canada. Lindblom says this is because goats haven’t traditionally been part of our culture and there is a lack of awareness about their benefits.

“It’s hard to get old cattle ranchers to switch to goats,” he says, adding that goats could be easily introduced on Canadian farms and ranches. He should know—he was a cattle rancher before going into the goat grazing business.

“It would be nice if the agriculture industry—or the government, the Department of Agriculture—would help people try and get something like this going, because it is such a good idea.”

He says goats are also extremely versatile because in addition to grazing, their meat, hides, and milk are also popular commodities. The vast majority of goat meat is currently imported to Canada from Australia and New Zealand.

“The goat meat industry is very strong. There’s a high demand for goat meat, and so it’s very helpful for the agricultural industry,” he says.

“For a small family farm with 400 or 500 goats, they can make a good income off the meat, plus off of the grazing.”

Lindblom says he would be willing to mentor anyone who wants to get into the industry because he sees so many benefits. He is nearly booked for the summer by various municipal governments and forestry companies in B.C. and Alberta, to the point that he has been turning down small jobs. It took a while to get people to understand what [the goats] could do. But now I’ve been getting quite a few phone calls,” he says.

“Until people understand how it works they’re hesitant to try it. But once they try it, they realize how well it works. … It just has to get the education out there, that’s all, because nobody’s ever thought of it before.”

While at camp in the Peace, Lindholm starts his day by herding the goats on horseback with the help of the dogs, then monitors the goats’ progress throughout the day to ensure they are eating in the right areas, moving them around as they clear the weeds. He’s back at camp by suppertime and sometimes he can even sneak in some fishing in the evening.

“It’s pretty nice when you get up in northern B.C., up in the mountains, and the fishing is just fantastic,” he says. “I have no trouble hiring people for the summer, because it’s just a great way to spend the summer.”
Posted by arclein at 12:00 AM