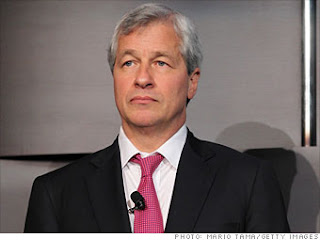 We get weary of carping on this but the banking system is a powerful tool that relies on private counter parties in order to function. When the banks forget this they are driven to trading with each other in order to see income and it quickly deteriorates into a Ponzi scheme. Real bankers never forget this, while brokers never knew this. Thus the allowing of brokers and bankers to play together has always been a disaster.

Now they are trying to wiggle out of another jackpot which is just as likely to destroy the capital base of Morgan Stanley. This is very sober Jamie Dimon here who may finally have his come to Jesus moment and willingly accept a more sober regulatory environment.

The biggest bank in the world will be one day the bank that figures out how to lend $1000 to 6,000,000,000 people and then repeat the process every year, while continuously responding to the natural growth in customer demand. Any bank that thinks it is in any other business is ultimately playing with fire as we have seen over and over again. Everyone can point to a perfect giant loan. The problem is that they cannot point to a perfect second loan or enough thereof to sustain the expectations created by that perfect deal.

In the meantime, the USA money supply languishes well below 2008 levels which was boosted at the end with stimulus funds and 10,000,000 clients are no longer clients.

URL of this article:

When Jamie Dimon, CEO of JPMorgan Chase Bank, appeared before the Senate Banking Committee on June 13, he was wearing cufflinks bearing the presidential seal.  “Was Dimon trying to send any particular message by wearing the presidential cufflinks?” asked CNBC editor John Carney.  “Was he . . . subtly hinting that he’s really the guy in charge?”

The groveling of the Senators was so obvious that Jon Stewart did a spoof news clip on it, featured in a Huffington Post piece titled “Jon Stewart Blasts Senate’s Coddling Of JP Morgan Chase CEO Jamie Dimon,” and Matt Taibbi wrote an op-ed called “Senators Grovel, Embarrass Themselves at Dimon Hearing.”  He said the whole thing was painful to watch.

“What is going on with this panel of senators?” asked Stewart.  “They’re sucking up to Jamie Dimon like they’re on JPMorgan’s payroll.”  The explanation in a news clip that followed was that JPMorgan Chase is the biggest campaign donor to many of the members of the Banking Committee.

That is one obvious answer, but financial analysts Jim Willie and Rob Kirby think it may be something far larger, deeper, and more ominous.  They contend that the $3 billion-plus losses in London hedging transactions that were the subject of the hearing can be traced, not to European sovereign debt (as alleged), but to the record-low interest rates maintained on U.S. government bonds.

The national debt is growing at $1.5 trillion per year.  Ultra-low interest rates MUST be maintained to prevent the debt from overwhelming the government budget.  Near-zero rates also need to be maintained because even a moderate rise would cause multi-trillion dollar derivative losses for the banks, and would remove the banks’ chief income stream, the arbitrage afforded by borrowing at 0% and investing at higher rates.

The low rates are maintained by interest rate swaps, called by Willie a “derivative tool which controls the bond market in a devious artificial manner.”  How they control it is complicated, and is explored in detail in the Willie piece here and Kirby piece here.

Kirby contends that the only organization large enough to act as counterparty to some of these trades is the U.S. Treasury itself.  He suspects the Treasury’s Exchange Stabilization Fund, a covert entity without oversight and accountable to no one. Kirby also notes that if publicly-traded companies (including JPMorgan, Goldman Sachs, and Morgan Stanley) are deemed to be integral to U.S. national security (meaning protecting the integrity of the dollar), they can legally be excused from reporting their true financial condition.  They are allowed to keep two sets of books.

Interest rate swaps are now over 80 percent of the massive derivatives market, and JPMorgan holds about $57.5 trillion of them.  Without the protective JPMorgan swaps, interest rates on U.S. debt could follow those of Greece and climb to 30%.  CEO Dimon could, then, indeed be “the guy in charge”: he could be controlling the lever propping up the whole U.S. financial system.

So should Dimon be regarded as a national hero?  Not if past conduct is any gauge.  Besides the recent $3 billion in JPMorgan losses, which look more like illegal speculation than legal hedging, there is JPM’s use of its conflicting positions as clearing house and creditor of MF Global to siphon off funds that should have gone into customer accounts, and its responsibility in dooming Lehman Brothers by withholding $7 billion in cash and collateral.  There is also the fact that Dimon sat on the board of the New York Federal Reserve when it lent $55 billion to JPMorgan in 2008 to buy Bear Stearns for pennies on the dollar.  Dimon then owned nearly three million shares of JPM stock and options, in clear violation of 18 U.S.C. Section 208, which makes that sort of conflict of interest a felony.

Financial analyst John Olagues, a former stock options market maker, points out that the loan was guaranteed by $55 billion of Bear Stearns assets.  If Bear had that much in assets, the Fed could have given it the loan directly, saving it from being swallowed up by JPMorgan.  But Bear did not have a director on the board of the NY Fed.

Olagues also notes that JPMorgan received an additional $25 billion in TARP payments from the Treasury, which were evidently paid off by borrowing from the NY Fed at a very low 0.5%; and that JPM executives received some very large and highly suspicious bonuses called Stock Appreciation Rights and Restricted Stock Units (complicated variants of employee stock options and restricted stock).  In 2009, these bonuses were granted on the day JPMorgan stock reached its lowest value in five years.  The stock quickly rebounded thereafter, substantially increasing the value of the bonuses.  This pattern recurred in 2008 and 2012.

Olagues has evidence of systematic computer-generated selling of JPMorgan stock immediately prior to and on the dates of the granted equity compensation.  Collusion to manipulate the stock to accommodate the grant of options is called “spring-loading” and is a violation of SEC Rule 10 b-5 and tax laws, with criminal and civil penalties.

All of which suggests we could actually have a felon at the helm of our ship of state.

There is a movement afoot to get Dimon replaced on the Board, on the ground that his directorship represents a clear conflict of interest.  In May, Massachusetts Senate candidate Elizabeth Warren called for Dimon’s resignation from the NY Fed board, and Vermont Senator Bernie Sanders has used the uproar over the speculative JPM losses to promote an overhaul of the Federal Reserve.  In a release to reporters, Warren said:

But what chance does even this small step have against the gun-to-the-head persuasion of a nightmare collapse of the entire U.S. debt scheme?

Propping Up a Pyramid Scheme

Is there no alternative but to succumb to the Mafia-like Wall Street protection racket of a covert derivatives trade in interest rate swaps?  As Willie and Kirby observe, that scheme itself must ultimately fail, and may have failed already. They point to evidence that the JPM losses are not just $3 billion but $30 billion or more, and that JPM is actually bankrupt.

The derivatives casino itself is just a last-ditch attempt to prop up a private pyramid scheme in fractional-reserve money creation, one that has progressed over several centuries through a series of “reserves”—from gold, to Fed-created “base money,” to mortgage-backed securities, to sovereign debt ostensibly protected with derivatives.  We’ve seen that the only real guarantor in all this is the government itself, first with FDIC insurance and then with government bailouts of too-big-to-fail banks.  If we the people are funding the banks, we should own them; and our national currency should be issued, not through banks at interest, but through our own sovereign government.

Unlike Greece, which is dependent on an uncooperative European Central Bank for funding, the U.S. still has the legal power to issue its own dollars or borrow them interest-free from its own central bank.  The government could buy back its bonds and refinance them at 0% interest through the Federal Reserve—which now buys them on the open market at interest like everyone else—or it could simply rip them up.

The chief obstacle to that alternative is the bugaboo of inflation, but many countries have proven that this approach need not be inflationary.  Canada borrowed from its own central bank effectively interest free from 1939 to 1974, stimulating productivity without creating inflation; Australia did it from 1912 to 1923; and China has done it for decades.[please note that both Canada and Australia financed a wartime economy in which 100% mobilization of the population and the industrial base was accomplished]

The private creation of money at interest is the granddaddy of all pyramid schemes; and like all such
schemes, it must eventually collapse, despite aquadrillion dollar derivatives edifice propping it up.  Willie and Kirby think that time is upon us.  We need to have alternative, public and cooperative systems ready to replace the old system when it comes crashing down.
Posted by arclein at 12:00 AM