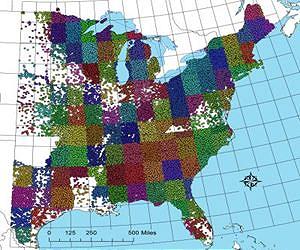 The take home, which no one wants to hear is that a forest is best when it is a blend of multiple species. Humanity wants an orchard but this is risky. We overcome that risk by short life spans and ample attention. An orchard on its own soon collapses under the assault of disease.


Tree husbandry is not something that can happen in nature and does not. Stands are usually a blend of several species and unique individuals within a species.


In time we will move to fully managed woodlots and full fiber recovery even if it is wood chips for the trails. This allows a mixed forest to be tightly managed and individual stems to be pulled as justified.


In the meantime we continue to replant as forest mono-cultures and harvest early to avoid the inevitable impact of uniform stands. It is not great but it generally works.

Data from over 3 million trees in the eastern half of the US were aggregated into two-degree-latitude-by-longitude cells in order to study regional patterns of conspecific negative density dependence, a process where the mortality of a species rises in coincidence with its increasing abundance. Credit: Indiana University.


How species diversity is maintained is a fundamental question in biology. In a new study, a team of Indiana University biologists has shown for the first time that diversity is influenced on a spatial scale of unparalleled scope, in part, by how well tree seedlings survive under their own parents.


Scientists have long considered conspecific negative density dependence (CNDD), a process where the mortality of a species rises in coincidence with its increasing abundance, to be a key mechanism maintaining diversity at the local scale. In new research to be published Friday in the journal Science, the IU researchers show that this mechanism is driving diversity from the borealforests to sub-tropical forests.


The report, "Conspecific negative density dependence and forest diversity," is authored by Daniel Johnson, a doctoral student in the IU Bloomington College of Arts and Sciences' Department of Biology. Co-authors are Wesley T. Beaulieu, also a doctoral student in the Department of Biology, and biology professors James D. Bever and Keith Clay, Johnson's major advisor.


Their work analyzed data on forest composition from over 200,000 plots containing more than 1.3 million trees and from paired plots containing over 1.7 million seedlings of 151 different tree species. The plots were located from the Canadian border south to Florida and from the Atlantic coast to the 100th meridian and covered over 1.5 million square miles. The U.S. Forest Service spends about $62 million each year to gather the publicly available forest inventory data used in the IU study.


"We are now able to provide robust evidence that CNDD is pervasive inforest communities from boreal to sub-tropical regions and that it can significantly affect the relative abundance and richness of species with and between forests," Johnson said.


"And we now see that the ability to which one tree species can sustain itself in the same area has profound impacts on the diversity of species at a spatial scale that has not been attainable previously. This is the first time it's been shown to be happening not just at a local spatial scale but over the entire eastern US."


The concept of CNDD is based on the well-known Janzen-Connell hypothesis, which proposes that the close proximity of adults reduces seedling survival of that species through increased attack by host-specificpests and pathogens.


Studies of CNDD in the past have mostly focused on forest communities at single sites or of a single species, with the most recent work showing that in tree species, composition and abundance can be influenced by CNDD at the scale of individual trees.


"Local interactions have previously been considered to affect species diversity at a local scale, but our findings indicate that local interactions feed back to species richness and abundance over much larger geographical scale, spanning most of eastern North America," Johnson said.


Evidence that local interactions underlie regional species richness is in contrast to the current understanding that patterns of forest diversity are primarily driven by temperature, precipitation and other physical aspects of the environment. This discovery has implications for how forest modeling is conducted and conservation and management decisions are made.