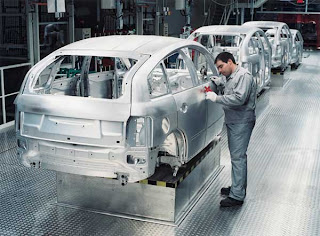 You will notice that the shift to aluminum is happening because of regulation mandate. Anyone who is familiar with aluminum alloys knows that all the steel in a car can be readily replaced with those alloys. The weight saving is huge. That five hundred pounds of aluminum is replacing fifteen hundred pounds of steel. Add in the replacement of much of the shell with plastic based material as has already done and the combined weight saving is huge.

My first point is that this was all doable when I was a teenager and getting rid of half the weight easily doubles mileage. Thus shifting from 35 mpg to 55 mpg is a matter of getting the weight out once and for all. It is obviously a bit of a challenge from an engineering point of view but it is certainly doable.

What it took was a regulatory mandate that put everyone on the same page in terms of the end game. The vehicles are naturally going to be more expensive and much longer lasting in foul conditions. All this means a significant shift in the business model.

The second point is this also sets the stage for the rise of the EV. There weight will continue to matter and starting with a low base is an excellent way to get serious range out of a battery charge.

This is all part of the ongoing automotive revolution that is presently underway as the industry shifts itself into a future that will no longer have much to do with hydrocarbons and a lot to do with battery life.

"It's an unprecedented time in the aluminum industry," says an Alcoa director. "Automakers are reacting to increases in fuel economy requirements and regulations. Every major market around the world is tightening fuel standards."

German auto maker BMW (BMWG.DE) has steadily been increasing its use of the metal in recent years.

(Reuters) - The global push to improve fuel efficiency in vehicle fleets will more than double the demand for aluminum in the auto market by 2025, Alcoa's (AA.N) director of automotive marketing said Wednesday.

Car makers from BMW to Audi have already started to react to the so-called Corporate Average Fuel Economy (CAFE) standards and are beginning to move away from heavier steel body frames to lighter-weight material in what should be the "next frontier" for the aluminum industry, Randall Scheps told delegates at the American Metal Market's Aluminum Summit in New York.

"Car makers are basically reacting to increases in fuel economy requirements and regulations. Every major market around the world is tightening fuel standards," Scheps said.

German auto maker BMW (BMWG.DE) has steadily been increasing its use of the metal in recent years.

"It's an unprecedented time in the aluminum industry, and car bodies are the next frontier," Scheps said.

He anticipated this transition from steel-bodied frames to lighter-weighted aluminum to more than double the industrial metal's overall rate of consumption in the auto market from 11.5 million tons in 2011 to 24.8 million tons by 2025.

By then, the amount of aluminum in an average car will grow from the current 343 lbs to 550 lbs.

In order to support this automotive demand growth, Alcoa has invested $300 million in expansion projects at its Davenport, Iowa rolled products plant.

"That's the next phase of capacity to serve the automotive market, and the forecasts we are looking at now shows that this phase will be full by 2015," Scheps said.

In the U.S., President Obama increased the CAFE standard from a target of 35.5 miles per gallon in 2016 to 54.5 miles per gallon by 2025, which was initially met with a lot of criticism from many automakers worried about rising costs and sticker-shocked customers.

But that resistance now appears to be fading.

"In the move to 54.5 mpg, the consumer is going to have to pay for a lot of things ... turbo chargers cost money, direct injection costs money, 8-speed transmissions cost money, and the aluminum will cost money, so what the automakers are doing are making this trade-off of what's the best bang for their buck in investing to improve fuel economy," Scheps said.

"If they can optimize the power-train together with the weight of the car, that gives them the best return."

Scheps also said competition from composite materials such as plastics and metals like titanium are "not going to happen in the near future".

"They are not compatible with the existing manufacturing infrastructure, too expensive, not recyclable, do not perform well in a crash and the manufacturing cycle time is too long.

"The consumer is never choosing one material over the other, they are choosing a full-sized car that gets a certain gas mileage," he said.

This article is full of repetitive paragraphs, contradictions, and unsupported statements. The claim that composites are too expensive, not strong enough, and therefore will not be used extensively is untrue. I assume this comes from the aluminium industry. They must be owned by the same people who own the auto and steel industry. The transition to composites will come by new auto makers if government will stop protecting the established makers. If not for government it would have come two decades ago.