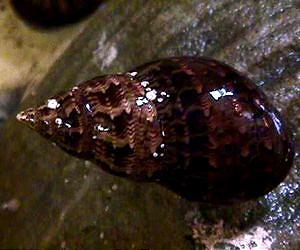 One thing that is poorly understood about the sea is that the actual variation in oceanic ecosystem throughout the globe is rather small. If the surface temperature is too warm, one merely sinks lower. Thus vegetation is generally universal as are their consumers. That is why Alaska is as rich as the Great Barrier Reef contrary to our common sense expectations and why now we are discovering the true richness of the Arctic seas.

Here we discover that small snails, too small to be interesting to us as food, just like zebra mussels, are the main herbivore to an extent unimagined.

An obvious corollary of all this is that it behooves us to investigate the possibilities of producing a larger version for possible human consumption itself. The sheer productivity calls for this.

It has been hard to determine the real effect of the zebra mussel on the Great lakes but it has cleaned up the water at the least. Birds have also learned to feed on them and other water life is figuring it out. The most interesting has been the crayfish which may be the easiest way to bring it into the human food system.

The study team analysed results from over 600 experiments, conducted over the past 40 years across the planet, where ecologists have experimentally removed herbivores to understand their importance in structuring marine habitats.


Coral reefs and seashores largely look the way they do because large fish and urchins eat most of the seaweed that might otherwise cover them, but a major new study has found that the greatest impact of all comes from an unexpected quarter - small marine snails.

The study published in the journal Ecology Letters is the largest of its kind ever undertaken into the ecological impacts of marine grazing animals: it was led by Associate Professor Alistair Poore, of the UNSW Evolution and Ecology Research Centre, who worked with an international team of 10 researchers.

It found that, on average, marine herbivores remove almost 70% of the plant material growing on the sea floor - an effect far greater than grazing animals have on land plants.

"We found that across the globe marine herbivores profoundly reduce the abundance of marine plants, with the strongest effects in rocky seashores," says Poore.

"Icons like the Great Barrier Reef would look very different otherwise: the corals and rocks are usually free of seaweed, but that's only because animals eat all the plants as soon as they grow.

"Big animals such as fish and urchins have major impacts on reefs and kelp forests but what may surprise many people is that we found that the strongest impacts of all were snails controlling seaweeds on rocky shores."

The study team analysed results from over 600 experiments, conducted over the past 40 years across the planet, where ecologists have experimentally removed herbivores to understand their importance in structuring marine habitats.

Manipulating animals in their natural habitats is the most powerful technique to understand how ecological interactions work, they note.

"When these grazing animals are removed, the seaweeds quickly start to dominate," notes Poore. "One of the exercises we give our students to illustrate this is to visit a rocky shore at Sydney's Maroubra Beach and remove all the snails from a selected area. When we return a few weeks later, the rocks are covered in green seaweed."

Of particular interest to ecologists is the team's finding that the global data set rejects the long-standing idea that herbivores in the sea and on land have stronger impacts on plants in the tropics.

"For decades, ecologists have believed that biological interactions like predation or herbivory are more intense in the tropics compared to temperate areas," says Poore.
"But we found no evidence of stronger herbivory close to the equator, nor increased herbivore impacts with increased temperature. Despite expectations, grazing on coral reefs did not have larger impacts than in several other marine habitats."

The study also found that in some ways, marine plants are winning the long evolutionary battle with their herbivores. Some groups of seaweeds and seagrasses can avoid herbivore damage with the help of chemical or physical defences or because they are poor quality food.
Posted by arclein at 12:00 AM