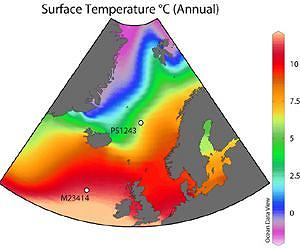 This item is a major confirmation of two separate paradigm shifts been developed in this blog.

The Eemian warm spell lasting 10,000 years and beginning 125,000 years ago was driven by the solar system passing through the Sirius Cluster. Earlier passages have also been detected and since we are presently heading back in our orbit toward Sirius, we are likely around seventy thousand years out for a total orbit time of approximately 200,000 years. See my article here on the Vostok Ice Core for prior work.

The second conjecture called here the Pleistocene Nonconformity remains the crustal shift deliberately brought about by impacting a comet on the Arctic Ice Cap to shift the North Pole then centered in Hudson Bay thirty degrees south and triggering the full Gulf Stream we experience today. Had the Eemian Gulf Stream been comparable to the Holocene, I would have considered it fatal to the conjecture itself whatever one thought of Eemian causation. In fact this new data conforms exactly to the conjecture.

The strengthened Gulf Stream is the new event that brought about the Holocene for which we have no other explanation except a bundle of improbabilities. This paper confirms that the Holocene is unique when compared to the Eemian. I thought as much but it is now confirmed.

One obvious conclusion is that our next pass through the Sirius Cluster will eliminate the Greenland Ice Cap and bring about a warmer Arctic Ocean. The Antarctic will take on the sole task of been the planets cooling engine. The boreal forest will become suitable for agriculture with more temperate species.

The predictions that I have made regarding the passage of the Solar system and the demise of the Ice Age over the past several years are been confirmed not only with the original data that forced the conjectures in the first place but by compelling evidence since such as the geological identification of the comet's effects and how the geological confirmation of the uniqueness of the advent of the Holocene.

One other conjecture has been made by other researchers that is plausible but far more problematic. This conjecture is that the crust shifted on its own accord around 20,000 BP and produced an unsatisfactory placement but provided the proof it could be accomplished with a comet impact timed properly.

The Ice mass was large enough and the balance unstable enough from a million years of growth that the crust simply moved in order to redress the balance situation. This led to the obvious conclusion that doing this properly would have the benefit of liberating the vast majority of the Earth's surface for terraforming generally which has been our mission for the past 10,000 years. This was accomplished deliberately 12900 BP. Please note deliberately. The probability of what occurred happening accidentally is unimaginably low.

http://www.terradaily.com/reports/Warm_Climate_Cold_Arctic_999.html
The Eemian interglacial period that began some 125,000 years ago is often used as a model for contemporary climate change. In the international journal "Geophysical Research Letters" scientists from Mainz, Kiel and Potsdam (Germany) now present evidence that the Eemian differed in essential details from modern climatic conditions.

To address the question about how climate may develop in the future, earth scientists direct their attention to the past. They look for epochs with similar conditions to today. The major identified climatic processes are then simulated with numerical models to further test possible reactions of the Earths' system.

An epoch which is often regarded suitable for such an undertaking is the Eemian warm period, which began around 125,000 years ago following the Saalian ice age. For about 10,000 years, average temperatures on Earth in the Eemian were rather enhanced - probably several degrees above today's level. This seems to be well documented in both ice cores as well as terrestrial records from land vegetation.

Substantial parts of the Greenland ice had melted, and global sea level was higher than today. "Therefore, the Eemian time is suited apparently so well as a basis for the topical issue of climate change", says Dr Henning Bauch, who works for the Academy of the Sciences and the Literature Mainz (AdW Mainz) at GEOMAR | Helmholtz Centre for Ocean Research Kiel.

However, in a study which appears in the recent issue of the international journal "Geophysical Research Letters" Dr Bauch, Dr Evgeniya Kandiano of GEOMAR as well as Dr Jan Helmke of the Institute for Advanced Sustainability Studies in Potsdam now show that the Eemian warm period differed from the present day situation in one critical aspect - the development in the Arctic Ocean.

In our current warm period, also called Holocene, oceanic and atmospheric circulation delivers large amounts of heat northward into the high latitudes. The most well known heat conveyer is the Gulf Stream and its northern prolongation called the North Atlantic Drift. The currents provide not only the pleasant temperatures in Northern Europe, they also reach as far as the Arctic.

Studies in the last years have shown that the oceanic heat transport to the Arctic has even increased, while the summer sea ice cover in the Arctic Ocean seems to be decreasing continuously. It has long been assumed that such conditions also prevailed 125,000 years ago. Accordingly, the Arctic should have been by and large ice-free in the Eemian summers.

Dr Bauch's group examined sediment cores from the seabed in which information about the climate history of the past 500,000 years is stored. These come from the Atlantic to the west of Ireland and from the central Nordic Seas to the east of the island of Jan Mayen.

The sediments contain minute calcite tests of dead microorganisms (foraminifers). "The type of species assemblage in the respective layers as well as the isotopic composition of the calcitic tests give us information about temperature and other properties of the water in which they lived at that time", explains Dr Bauch.

The samples from the Atlantic delivered the higher-than-Holocene temperature signals so typical for the Eemian. The tests from the Nordic Seas, however, tell quite another story. "The found foraminifers of Eemian time indicate comparatively cold conditions". The isotope investigations of the tests, in combination with previous studies of the group, "indicate major contrasts between the ocean surfaces of these two regions ", according to Dr Bauch.

"Obviously, the warm Atlantic surface current was weaker in the high latitude during the Eemian than today." His explanation: "The Saalian glaciation which preceded the Eemian was of much bigger extent in Northern Europe than during the Weichselian, the ice age period before our present warm interval. Therefore, more fresh water from the melting Saalian ice sheets poured into the Nordic Seas, and for a longer period of time.

This situation had three consequences: The oceanic circulation in the north was reduced, and winter sea ice was more likely to form because of lower salinity. At the same time, this situation led to a kind of 'overheating' in the North Atlantic due to a continuing transfer of ocean heat from the south."

On the one hand, the study introduces new views on the Eemian climate. On the other hand, the new results have consequences for climatology in general: "Obviously, some decisive processes in the Eemian ran off differently, like the transfer of ocean warmth towards the Arctic. Models should take this into consideration if they want to forecast the future climate development on the basis of past analogues like the Eemian ", says Dr Bauch.