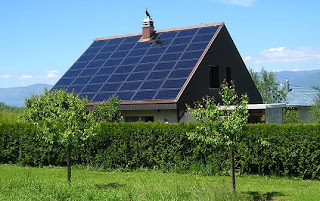 It is unsurprising that solar installations rigged to integrate with the grid would fail to have an expensive default of alternate power supply in the event of a grid failure. This is all complex and expensive engineering and you are trying to do things that the grid itself has problems with.

This is not going to change at all until we can integrate a cost effective energy storage system into the home itself. Distributed storage is coming simply because the EV is coming. Once that part of the architecture is in place, then the whole grid becomes a giant storage device and all this goes away. The problem has always been the inverters whose usage you want to minimize in favor of local storage. With no storage whatsoever it all becomes a very expensive proposition.

In the meantime one cannot have your cake and eat it. You are on the grid or not and a grid shutdown shuts you down.

This state of affairs will not last forever, but certainly for another five years.

Reality check: When the power grid goes down, all grid-tie solar systems will go down with it

(NaturalNews) A lot of people believe they are becoming "power independent" by installing grid-tie solar systems, but what many don't realize is that virtually all such systems are designed to actively go offline when the power grid goes offline.


A "grid-tie" solar system is one that ties into the power grid, pulling electricity from the grid when needed, then pushing excess electricity back into the grid when the local customer isn't using the full capacity being generated by PV panels (photovoltaic). As long as the grid stays up, it's a clever solution because it reduces or even eliminates the customer's electric bills while generating "clean" energy.

Because of the very fact that these systems are tied into the power grid, however, they all have a safety feature that disconnects them from the grid when the grid goes down. In other words, if the power grid goes offline, your entire grid-tie solar array becomes instantly useless and you can't power a laptop computer even if you have $100,000 worth of solar panels sitting on your roof. In a grid-tie system, they all are instantly shut off.


Let me be clear, because some people reading this article seem to vastly misunderstand the issue:When the power grid goes down, your entire PV array is instantly disabled by your grid-tie inverters, and you cannot use your PV array for anything! Even if the sun is shining, you will have no power from it, period. Understand?


Some early comments to this story suggested that people could simply install a throw switch that would divert the PV array to local use only. This is NOT allowed by local electrical code! Such a system is very difficult to engineer in a safe manner and would almost certainly violate local codes in nearly all U.S. cities. It simply will NOT pass inspection and will not be allowed in most areas. I spoke with top solar consultants to confirm this. At best, such a system would exist in a "grey area" of regulatory approval, I was told.


Again, most people reading this story still do not understand what I'm saying here, and I've backed this up with conversations with top solar experts and equipment providers around the world. When the power grid goes down, virtually all grid-tie systems go down with it. Your solar panels are instantly rendered useless and cannot be used until the city power grid is restored.

It's a "safety" feature

Four out of five people reading this will not believe this information because it is so counter-intuitive. I spoke with architects and engineers who didn't even know this information. They were all proven wrong. If you install a grid-tie solar system, the entire system is immediately useless when the grid goes down. You will have zero power, even if the sun is shining. Your solar array only functions when grid power is up, get it? That's the way grid-tie systems are hard-wired. There is no BYPASS function.Grid down = solar array down, period.


What's the reason behind all this? Because if the main power grid is down, the assumption is that a power line worker may be working on the line somewhere. If a local solar customer is feeding electricity back up the line, that can be dangerous -- even deadly -- to a power line worker. Thus, all grid-tie solar equipment sold today includes the "safety feature" of automatically shutting down when the grid goes down.


Or at least that's the official explanation from the solar power companies, because there's no explanation as to why these inverters have to shut off the local supply of power from the PV panels. Why not let the homeowner continue to have electricity from their own solar panels even if the power grid is down?

"Off-grid" systems allow precisely that. These systems, which do not tie into the power grid, run on a combination of solar panels, batteries and often a backup generator running on gasoline, diesel or propane.

Off-grid systems are ridiculously expensive to own and operate, mostly due to the cost of batteries. Today's battery technology remains stuck in the 1800's, meaning that even so-called "deep cycle" batteries will still last only 5 - 10 years. If you do the math on the cost of batteries for a typical off-grid system running a household of four people, you'll come to the surprising figure that batteries alone can cost you $500 / month, each and every month that you use an off-grid system (that's the total cost of the batteries divided by the number of months they will last).


That's why most people don't go with off-grid systems. Grid-tie systems cost significantly less, especially with solar panels now at rock-bottom prices thanks to China dumping them onto the U.S. market below manufacturing cost. (Right now is a great time to buy solar panels, before new tariffs kick in.)


Batteries can be eliminated in such a system by having a standby generator. The solution I personally recommend, as I have researched this in considerable detail, is to purchase a 20kw Generac generator and acquire a 1,000-gallon propane tank to power it. If you practice some simple energy conservation techniques (such as limiting use of air conditioners or heaters), you can run a typical household for 2-3 months on 1,000 gallons of propane. And if you have solar panels to help along the way, that could be stretched to 4-6 months since you'd only be using the propane fuel at night or when the sun isn't shining.


Only an off-grid system gives you true energy independence.

The kicker in all this is that many people mistakenly think they're buying one kind of system when, in reality, they're buying the other kind. Solar installation companies that install grid-tie systems do not necessarily inform their customers that their systems will not function when the power grid goes down. So these customers, even after spending $20,000 to $80,000 or even more, end up with a system that's 100% dependent on the power grid!


And how likely is the grid to go down? Cyber security expert David Chalk says there is a "100 percent chance" that the grid will go down in the near future due to vulnerabilities to cyber terrorism. I recently interviewed him about this subject, and you can watch that interview at:
http://tv.naturalnews.com/v.asp?v=81D036C326E439BFA82D0592925918C2


When I asked him how many months or year it might be before we suffer a catastrophic infrastructure failure of some kind, his reply was, "It's more like a matter of days."

As you probably suspected, the kind of solar equipment used to build off-grid systems -- the kind that function without the power grid -- is in very short supply. Manufacturers in Germany, Japan and China are backordered for months. Free inventory is virtually zero. Install times for new systems can now stretch out as long as six months in some cities.


If you want an off-grid solar system and you're not already in the queue to get one, there's very little chance you can have one in place before the prophecy date of December 21, 2012... if that even matters to you. I personally don't put any special weight on that date, but I do believe our world is becoming increasingly unpredictable. Those who want to be safe, prepared and living with a source of electricity need to take steps now to install off-grid systems.


Don't rely on solar installation companies to know what you want. In most cities, they automatically assume customers just want "grid-tie" systems to reduce their electric bills. So if you don't insist on it, you'll end up buying a grid-tie system that becomes a useless heap of dead electronics on the day the power grid dies.


Additional notes: Yes, even off-grid systems are vulnerable to solar flares and EMP attacks (dir/Technology/Solar-Panels-Sunlight-Energy.jpg). There's no protecting fragile electronics from such events unless you keep a spare set of redundant equipment protected inside Faraday cages or wrapped in aluminum foil and stored inside galvanized aluminum trash cans. Even then, you'd have to figure out how to reinstall everything from the ground up, which would require an expert electrician.
Posted by arclein at 12:00 AM

hi. nice blog. it was very interesting such an interesting blog post. will be looking for more reviews.

Solar energy is been seen as the future power source which will lighten up our new world.
Off Grid Solar Systems