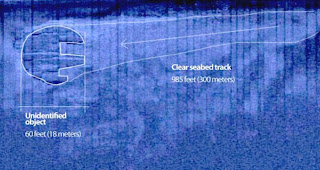 Just what is this? To start with, if the structure is solid stone or concrete, the weight would have produced a much deeper damage strip along the apparent slide path. If it is hollow then why are we seeing edge damage and little indication of penetration? It it is metallic, why is it not obvious?

I think we can dismiss the idea that it was built on land when the sea level was lower. The build up of sediment is way too low. It is more in conformance with a recent event. Maybe it will turn out to be a huge fuel tank caught at sea and bombed though the curved walls appear to be effort beyond that.

Right now we need some lab work done on those stones and soot at least. That way we may be able to wake up and discover a simple human explanation.

The electrical problems suggests that a strong electrical field is been produced. This is easily tested.

After that and provided the mystery deepens, then the next step will be to attach grab points onto the device and to actually lift it off the sea bed and bring it to dry dock.

In the meantime I would like to see research done on WWII losses in the area. Did the Finns get up to something? Recall that a hollow concrete structure with bulk heads could make it out to sea before it sinks when a bomb hits it.

If this were a simple building, there would be little interest while still failing to understand its locale. Surely we can demonstrate if it is concrete or not. Maybe the Finns pulled a large fuel tank out of harms way in order to get storage to a northern port. They certainly were up to it.


The divers exploring a 'UFO-shaped' object at the bottom of the Baltic Sea say their equipment stops working when they approach within 200m.

Professional diver Stefan Hogerborn, part of the Ocean X team which is exploring the anomaly, said some of the team's cameras and the team's satellite phone would refuse to work when directly above the object, and would only work once they had sailed away.

He is quoted as saying: 'Anything electric out there - and the satellite phone as well - stopped working when we were above the object.

'And then we got away about 200 meters and it turned on again, and when we got back over the object it didn’t work.'

Hefty trajectory: The Swedish diving team noted a 985-foot flattened out 'runway' leading up to the object, implying that it skidded along the path before stopping but no true answers are clear

Diver Peter Lindberg said: 'We have experienced things that I really couldn’t imagine and I have been the team's biggest skeptic regarding these different kind of theories.

'I was kind of prepared just to find a stone or cliff or outcrop or pile of mud but it was nothing like that, so for me it has been a missing experience I must say.'

Member Dennis Åsberg said: 'I am one hundred percent convinced and confident that we have found something that is very, very, very unique.

'Then if it is a meteorite or an asteroid, or a volcano, or a base from, say, a U-boat from the Cold War which has manufactured and placed there - or if it is a UFO...

'Well honestly it has to be something.'

The quotes were first reported at NDTV. The Mail Online has reached out to the Ocean X team for clarification.
The team did get some pictures, such as these soot-covered rocks that encircled an egg-shaped hole which went into the object at its center, and have no idea what any of it means
No clarification: The divers made their sonar discovery public but waited a year to make the dive because they had to gather enough funding and base off of weather conditions
Landing spot: The exact coordinates of the object have not been released, but it is confirmed to be somewhere at the bottom of the Botnia Gulf in the Baltic Sea between Finland and Sweden

The object was first found in May last year, but because of a lack of funding and bad timing, they have were not able to pull a team together to see for themselves - just the strange, metallic outline, and a similar disk-shaped object about 200 metres away. - [ This could be the broken of part of the structure we are seeing]

During their visit, the team saw a 985-foot trail that they described 'as a runway or a downhill path that is flattened at the seabed with the object at the end of it'.

As it was before the recent dive, the story behind the object is anyone's guess, from a 'plug to the inner world' to the Millennium Falcon ship from Star Wars.

While the Ocean Explorer team is understandably excited about their potentially earth-shattering find, others are slightly more sceptical and are questioning the accuracy of the sonar technology.

In the past, such technology has confused foreign objects with unusual- but natural - rock formations.

Part of the trouble they face, however, is that they have no way of telling what is inside the supposed cylinder- whether it is filled with gold and riches or simply aged sediment particles.
They're hoping for the former, and history seems to be in their favour.

The Baltic Sea is a treasure trove for shipwreck hunters, as an estimated 100,000 objects are thought to line the cold sea's floor.

The company have created a submarine that they hope will appeal to tourists and wannabe shipwreck hunters who will pay to take a trip down to the bottom of the Baltic Sea to see for themselves.
A further dive will take place in the coming weeks.