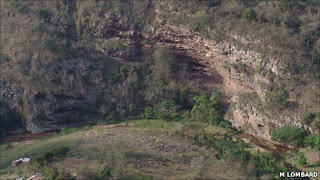 This places stone arrow making technology around 64,000 years ago in the key locale fro the rise of modern humanity.  Perhaps a little too coincidental but we have rich marine environment to act as an incubator that was not obviously too dangerous.  Recall sea levels were then three hundred feet lower providing broad marine plains in an ice age climate that was most likely temperate in nature here at this time.
Arrow making is as advanced as stone age technology pretty well got.  Thus we have the likelihood of a full stone age tool kit emerging here first.  That tool kit was then spread out throughout the world.  Remember my comment that a given tool kit can be distributed globally in around ten millennia and actually be ubiquitous within a few millennia thereafter to allow its appearance in the archeological record.
Thus the establishment of this tool kit likely began 75,000 years ago and was globally common by fifty thousand years ago.  This could even include the and there is some evidence of all that but scant.
Yet wooden arrows came much sooner and certainly preceded the stone arrow.  In fact observation of such tribesmen suggests that this weapon form arose possibly simultaneously with modern humanity.  It was just too obvious an invention needing only the ability to shape wood and to twist fiber to make something useful.
Stalking easily brought the hunter into a short bow range while at a difficult throwing range.  It was too powerful an assist to not be used quickly.  The question is whether it was used by earlier forms of humanity who did have the spear.
Oldest evidence of arrows found
By Victoria GillScience reporter, BBC News
26 August 2010 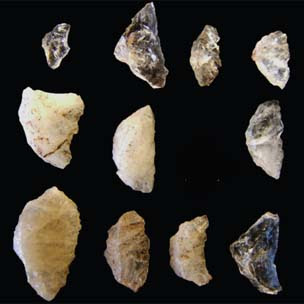 ** The stone points are approximately 64,000 years old
Researchers in have revealed the earliest direct evidence of human-made arrows.
The scientists unearthed 64,000 year-old "stone points", which they say were probably arrow heads.
Closer inspection of the ancient weapons revealed remnants of blood and bone that provided clues about how they were used.
The team reports its findings in the journal Antiquity.
The arrow heads were excavated from layers of ancient sediment in in . During the excavation, led by Professor Lyn Wadley from the University of the , the team dug through layers deposited up to 100,000 years ago.
Marlize Lombard from the university based in led the examination of the findings. She described her study as "stone age forensics".
"We took the [points] directly from the site, in little [plastic] baggies, to the lab," she told BBC News.
"Then I started the tedious work of analysing them [under the microscope], looking at the distribution patterns of blood and bone residues."
Because of the shape of these "little geometric pieces", Dr Lombard was able to see exactly where they had been impacted and damaged. This showed that they were very likely to have been the tips of projectiles - rather than sharp points on the end of hand-held spears.

** Closer inspection revealed remnants of blood (left) and bone fragments (right)
The arrow heads also contained traces of glue - plant-based resin that the scientists think was used to fasten them on to a wooden shaft.
"The presence of glue implies that people were able to produce composite tools - tools where different elements produced from different materials are glued together to make a single artefact," said Dr Lombard.
"This is an indicator of a cognitively demanding behaviour."
The discovery pushes back the development of "bow and arrow technology" by at least 20,000 years.
Ancient engineering
Researchers are interested in early evidence of bows and arrows, as this type of weapons engineering shows the cognitive abilities of humans living at that time.

** The arrows were excavated from in
The researchers wrote in their paper: "Hunting with a bow and arrow requires intricate multi-staged planning, material collection and tool preparation and implies a range of innovative social and communication skills."
Dr Lombard explained that her ultimate aim was to answer the "big question": When did we start to think in the same way that we do now?
"We can now start being more and more confident that 60-70,000 years ago, in , people were behaving, on a cognitive level, very similarly to us," she told BBC News.
Professor Chris Stringer from the in said the work added to the view that modern humans in 60,000 years ago had begun to hunt in a "new way".
Neanderthals and other early humans, he explained, were likely to have been "ambush predators", who needed to get close to their prey in order to dispatch them.
Professor Stringer said: "This work further extends the advanced behaviours inferred for early modern people in ."
"But the long gaps in the subsequent record of bows and arrows may mean that regular use of these weapons did not come until much later.
"Indeed, the concept of bows and arrows may even have had to be reinvented many millennia [later]."
Posted by arclein at 5:27 AM No comments: 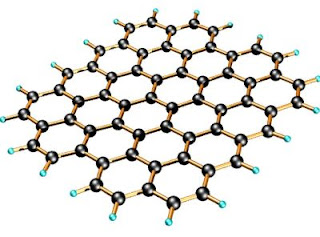 The graphene story continues to get better.  Now we are learning to produce perfect edges and monolayers perfectly separated.

Essentially graphene is shaping up to exceed the capabilities of all other materials in terms of fabrication ease and flexibility.

Now we need some smart strategy to use graphene to store a lot of electrical energy.

Graphene fabrication gets a boost

http://www.eetimes.com/electronics-news/4206494/Graphene-fabrication-gets-a-boost
PORTLAND, Ore. -- Graphene, which promises to solve many problems as silicon design rules approach the atomic scale, performs better when these pure carbon devices are made smaller. The catch is that at the nanoscale level, features must have atomic accuracy, including near perfect edges and monolayers.

The Energy Department's National Laboratory is creating a set of tools for fabricating perfect graphene sheets, including the recent finding that electron radiation prevents connections between monolayers.

researchers used supercomputers to simulate the fabrication of graphene using quantum molecular dynamics. In the process, scientists claim to have uncovered a new method of fabricating perfect edges and monolayers in graphene.

Researchers reported last year on a method called Joule heating, that uses an electric current to trim  graphene edges to perfection, albeit at the expense of creating structural loops that make connections between monolayers. Using quantum molecular dynamics in their supercomputer simulations, an intermediate step in the edge-formation process was discovered. The researchers harnessed that step to perfect the fabrication method.

The group now reports that using electron irradiation during the edge formation process prevents loops between layers from forming.
Posted by arclein at 5:23 AM No comments: 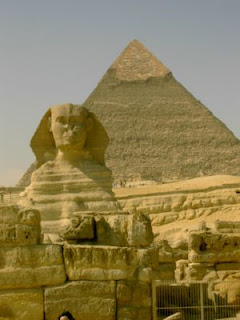 This is always welcome news.  We are refining our knowledge of the time and place of the Egyptian dynasties and individual rulers.
All very nice, but we are sorely lacking actual accounts.  Then of course we do not have artifacts for many vast cultures even.  Yet when we compare our scant knowledge of this history to contemporaneous information from the Bible we also know how much has been lost.
This narrows ranges nicely and should allow a rather good chronology now.  It had been getting pretty good and much of this work is independent confirmation.
Constraining the Reign of Ancient : Radiocarbon Dating Helps to Nail Down the Chronology of Kings, Researchers Say
http://www.sciencedaily.com/releases/2010/06/100617143926.htm
ScienceDaily (June 18, 2010) — For several thousands of years, ancient Egypt dominated the Mediterranean world -- and scholars across the globe have spent more than a century trying to document the reigns of the various rulers of Egypt's Old, Middle and New Kingdoms. Now, a detailed radiocarbon analysis of short-lived plant remains from the region is providing scientists with a long and accurate chronology of ancient Egyptian dynasties that agrees with most previous estimates but also imposes some historic revisions.
Although previous chronologies have been precise in relative ways, assigning absolute dates to specific events in ancient Egyptian history has been an extremely contentious undertaking. This new study tightly constrains those previous predictions, especially for the , which was determined to be slightly older than some scholars had believed. The study will also allow for more accurate historical comparisons to surrounding areas, like and , which have been subject to many radiocarbon dating techniques in the past.
Christopher Bronk Ramsey and colleagues from the Universities of Oxford and Cranfield in England, along with a team of researchers from France, Austria and Israel, collected radiocarbon measurements from 211 various plants -- obtained from museum collections in the form of seeds, baskets, textiles, plant stems and fruits -- that were directly associated with particular reigns of ancient Egyptian kings. They then combined their radiocarbon data with historical information about the order and length of each king's reign to make a complete chronology of ancient Egyptian dynasties.
Their research is published in the June 18 issue of Science, the peer-reviewed journal published by AAAS, the nonprofit science society.
"My colleague, Joanne Rowland, went to a lot of museums, explaining what we were doing and asking for their participation," Bronk Ramsey said. "The museums were all very helpful in providing material we were interested in -- especially important since export of samples from is currently prohibited. Fortunately, we only needed samples that were about the same size as a grain of wheat."
The researchers' new chronology does indicate that a few events occurred earlier than previously predicted. It suggests, for example, that the reign of Djoser in the Old Kingdom actually started between 2691 and 2625 B.C. and that the began between 1570 and 1544 B.C.
Bronk Ramsey and his colleagues also found some discrepancies in the radiocarbon levels of the Nile Valley, but they suggest that these are due to ancient Egypt's unusual growing season, which is concentrated in the winter months.
For the most part, the new chronology simply narrows down the various historical scenarios that researchers have been considering for ancient .
"For the first time, radiocarbon dating has become precise enough to constrain the history of ancient to very specific dates," said Bronk Ramsey. "I think scholars and scientists will be glad to hear that our small team of researchers has independently corroborated a century of scholarship in just three years."
This report by Bronk Ramsey et al. was funded by the Leverhulme Trust with additional financial support from the German-Israeli Foundation for Scientific Research and Development, NERC, CNRS, CEA, IRSN, IRD, and Ministère de La Culture.
Posted by arclein at 5:18 AM No comments: