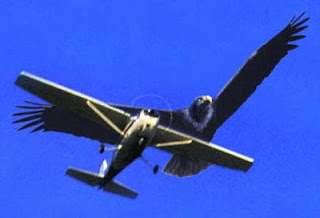 There are a number of thunder bird sightings out there and they continue to confound mostly. Again, the reports are terribly local with startled witnesses who are never properly debriefed. These witnesses need an experienced researcher who can not only gather the report as best as possible in calmer circumstances, but who can also authenticate the witness.


This was the breakthrough that established BFRO in the Bigfoot search. Today we have a data base there of hundreds of reports in which it is possible to reside confidence. The same approach is needed for thunder bird sightings and other cryptids. With a public site collecting these reports professionally, individuals possessing local information will be encouraged to come forward because they trust the process itself.


One aspect of the thunder bird sightings is worth commenting on. I suspect that a significant subclass consists of personal gliders been used by military personnel and are in fact camouflaged to look like a natural creature.


The real thing is a large bird with brown buff feathers mostly with the exceptional black coloration likely reflecting male and female coloration.


The Bird is clearly nocturnal but will fly in the daytime. Ground based observers simply fail to appreciate size for lack of a reference. The bird is able to roost safely on the ground and take cover easily among evergreens in particular.


Like all large nocturnal cryptids, these creatures know enough to avoid us. They may becoming a little less nervous though.


This bird mostly relies on gliding as much as possible flapping as necessary. This is to be expected.


I am still uncomfortable with the lack of good beak descriptions because that is the one thing that is often quite unique. It does not appear to be a raptor. Again witnesses are so taken up by the bulk that the bumper goes connoted. I do have one report claiming a yellow beak, but it is the one report that sounds most like a few good old boys out hang gliding.


Other possibilities including giant vampire bats, giant owls and pterodactyls are all floating out there and are all plausible and may even all exist to prove that intelligent large animals really know how to avoid us, just as we know how to avoid polar bears, grizzlies and lions.


I stopped underestimating the intelligence of mature wild animals a long time ago.


However, after reviewing several actually excellent sightings I have come to suspect that the creature we are dealing with could turn out to be an Andean Condor.  The creature would have no difficulty extending its range into North America.  Individuals could easily be much larger than the ten foot wing span and the white collar is a give away.


I found the following newspaper article published by the York Daily Recorder, York, Pa on June 19, 2006, It detailed a supposed sighting of a large bird-like creature at Brandywine Crossing in Manchester Township, York County, PA. I didn't know about this sighting...I think this is the incident that Jim S. referenced in his email:

Pat Grether is a skeptical person. The 53-year-old mother and grandmother doesn't believe in ghosts or goblins or monsters or UFOs or aliens or Bigfoot. As far as she's concerned Elvis is dead, and the Loch Ness Monster, infamous legend of her native Scotland, is a myth.


She's not crazy, nor does she drink or partake in the kinds of substances that would result in a person seeing a huge, scary bird in her backyard.


Her dog, a 6-month-old chow named Bear, was in the backyard of her home on Leaf Street in Brandywine Crossing in Manchester Township. Beyond the fence is a grassy


hill, home to a bunch of groundhogs. She has no neighbors to the back of her house.


It was about 10 when she heard Bear yelping and barking and generally carrying on like a bird large enough to carry her away had landed just on the other side of the fence.


Grether went outside to see what the problem was. It sounded like something had frightened Bear, she said, something big, scary and weird.


Pat saw it as soon as she walked out the door. At first, she thought it was one of those big kites kids sometimes fly in the field. But it wasn't.


If that's so, it was the avian equivalent of an Escalade.


Huge doesn't do it justice.


It was black, except for white feathers on the tips of its wings and what appeared to be a white ring around its neck. [I am concerned here that this is inspired by Warner Bros or perhaps the other way around] It didn't look like any bird she knew. She knows what eagles look like, and it wasn't an eagle. She knows what vultures look like, and it wasn't that either. "Vultures have that turkey face," she said. "It didn't have a turkey face."


Most striking was the bird's size.


Considering that California condors - the largest bird in North America, which, of course, is not native to this region - has a wingspan that approaches 10 feet, that's a lot of bird.


The huge bird perched in the field, just beyond her fence.


"I was shaking," Grether said. "I was scared to move. It takes a lot to scare me. Nothing scares me. But this did."


Bear, brave creature that he is, crouched behind her. "Bear was scared to death," she said. "And chows aren't scared of anything. They hunt lions."


She froze, and after what seemed like a long time, the bird took to wing and flew off toward the south, toward York.


Then, she went inside and called her husband, Glenn, to tell him that she wasn't crazy, but she had just seen a huge bird behind their house. Her husband didn't think she was crazy. If she said she saw it, she saw it.


She and her husband later checked the Internet and couldn't find any birds that resembled the one she says she saw. She has her video camera charged and ready to go in her kitchen in case it comes back.


And it was huge bird, bigger than any bird native to these parts.


Francis Velazquez, a naturalist at York County's Nixon Park, said he'd never heard of a bird that big. He said it could have been an immature eagle or a vulture, but neither of them have wingspans of 18 to 20 feet. A full-grown eagle, he said, may reach 9 feet, but that's about as big as it gets. He said sometimes, particularly with people not familiar with birds, it's difficult to judge a bird's size and wingspan.


It wasn't a monster, Grether said. It was a bird.


And she hopes someone else saw it.


"It's impossible for a bird that size to be around and nobody else see it," she said. "I just want to know if anybody else saw it."


She hopes it won't become the York County version of the Loch Ness Monster.


Which she doesn't believe in anyway.

The general credibility of witnesses of the "thunderbird" accounts can easily fall into subjectivity. I try to look for patterns to determine whether that much can be avoided, and it can. If thunderbirds turn up in the same areas over long periods of time then the ornithological experise of the witnesses, or lack of, is of much lesser consequence.

Even among birdwatchers, estimations of size are considered, incidentally,
useless to the watcher. A measuring instrument would be necessary to begin making such calls, or impressions of size of one individual in relation to another such as ducks in a pond.
(Sibley, Sibley Guide to Birds of Western North America)

If personal gliders have been designed to look like birds, this cannot account for any early sightings of thunderbirds, and there are many.