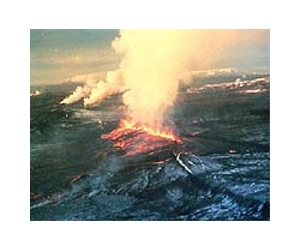 The bad news is that we are pretty well due to experience a monster Icelandic flood volcano this century and it will be unpleasant for months.  Our recent eruption was no more than a gentle reminder of something two orders of magnitude stronger.

In fact I suspect that needs to have a disaster response plan in place that can accommodate a major evacuation of itself since the local atmosphere could easily become almost unbreathable.  The best solution for such an evacuation is to plan sea lift from westward to .  I would even go so far as to think through resources been put in place for such an eventuality.

My point is that this happens to be the one major disaster scenario that will happen sooner or later with dire consequences and having storage facilities that naturally accumulate food stuffs a full year in advance outside the danger area is sound.  Such resources can also be deployed for other similar disasters around the world.

In the meantime, the evacuation option needs to be in place with some confidence.

If a Laki-like eruption were to begin in late spring or summer, as it did in 1783, the daily average concentrations of sulfur dioxide during that first month would exceed 40 parts per billion by volume (ppbv) in up to a third of the and European airspace, the new simulations show.

A modern recurrence of an extraordinary type of volcanic eruption in could inject large quantities of hazardous gases into and European flight corridors, potentially for months at a time, a new study suggests. Using computer simulations, researchers are investigating the likely atmospheric effects if a "flood lava" eruption took place in today.

Flood lava eruptions, which stand out for the sheer amounts of lava and sulfurous gases they release and the way their lava sprays from cracks like fiery fountains, have occurred in Iceland four times in roughly the past thousand years, records indicate, the most recent being the deadly and remarkable eruption of Iceland's volcano Laki in 1783-84.

When Laki sprang to life on June 8, 1783, it generated a sulfuric acid haze that dispersed over , , , the , , , and other countries. It killed a fifth of 's population and three-quarters of the island's livestock. It also destroyed crops, withered vegetation, and sowed human disease and death in several Northern European nations.

During the eight months that Laki erupted, the volcano blasted 122 million tons of sulfur dioxide into the atmosphere - seven times more than did the 1991 Mt. Pinatubo eruption in the Philippines and approximately 50 to 100 times more per day than Iceland's Eyjafjallajokull volcano released in 2010.

Researchers have found evidence in previous studies that a modern Laki-like eruption could disrupt European air traffic. Now, using two computer models that simulate physical and chemical behaviors of volcanic emissions, atmospheric scientist Anja Schmidt of the University of Leeds in the U.K. and her colleagues are refining scientific understanding of the likely concentrations and distributions of hazardous sulfur dioxide gas and sulfuric acid from such an event.

If a Laki-like eruption were to begin in late spring or summer, as it did in 1783, the daily average concentrations of sulfur dioxide during that first month would exceed 40 parts per billion by volume (ppbv) in up to a third of the and European airspace, the new simulations show.

That concentration falls just under the level of 47 ppbv at which the World Health Organization (WHO) deems chronic exposure to the gas a health hazard, although short-term exposures are considered hazardous only at much higher concentrations. In up to 10 percent of the air space, concentrations would exceed five times the WHO chronic exposure guideline, the researchers found.

The emissions wouldn't come from Laki itself, which volcanologists say has spent its fury, but could explode from several other Icelandic volcanic systems.

Most sulfur dioxide gas emitted by volcanoes rapidly undergoes chemical reactions to form an aerosol - minuscule particles suspended in the atmosphere - of sulfuric acid droplets. In the new simulations - focusing again on the first month of the eruption - average daily concentrations of the droplets, in up to 10 percent of the air space, would exceed 10 times London's average daily concentration of the corrosive pollutant, the researchers found.

"It's known that flying through a volcanic ash cloud can damage aircraft. In the case of a Laki-type eruption, high sulfur dioxide and sulfuric acid concentrations will have to be considered as an additional hazard," Schmidt said. An acceptable level of exposure for aircraft and their passengers is something for government aviation officials and industry to address, she added.

Schmidt presented the preliminary results from the study today in Selfoss, Iceland at the Chapman Conference on Volcanism and the Atmosphere, a meeting sponsored by the American Geophysical (AGU). Her collaborators include Kenneth Carslaw, also of Leeds, Claire Witham and Matthew Hort of the Met Office, in , and Thor Thordarson of the of , also in the Previous work by Thordarson and others had suggested that a new Laki-like eruption could disrupt air traffic.

When Eyjafjallajokull erupted two years ago, its ash plume created a huge air traffic snarl across for about a week, causing cancellations of more than 100,000 flights, according to published reports. A flood-lava eruption would also spew ash, but it would release far more sulfur dioxide than a volcano like Eyjafjallajokull does, Schmidt explained.

Judging from the past, a Laki-like eruption would likely continue for a lot longer than did Eyjafjallajokull's outburst, possibly cancelling many more flights, Schmidt said. Also, the eruption would be most intense in the first few months, which suggests that atmospheric effects would remain at about the same levels for the first two to three months. "But really, it's the next step in our research to analyze later stages of the impact and determine if and where emission concentrations might pose a short-term exposure hazard," she noted.

Schmidt has previously investigated the human health implications of a modern Laki-like eruption. A study published last year in Proceedings of the of Sciences, on which she was the first author, found that a modern Laki-type eruption could result in 142,000 deaths as a result of cardiopulmonary damage that its emissions would inflict on today's Europeans.

It's difficult to predict exactly what the consequences will be if and when another flood-lava eruption roils the skies of , Schmidt said, because so many variables affect the behaviour of a volcano and therefore its impacts on aviation and society. But, she added, with sound estimates of the range of possibilities, and how various factors influence them, aviation officials and the airline industry, health care providers and the rest of society can better prepare and plan for the harsh reality of the next Laki-like event

nice posting.. thanks for sharing.

An event that will exterminate our species will occur. It is only a matter of time, as the past has shown. Preparation for all possible events is only possible if we populate space. That is only possible if we are free to maximize resources. Our biggest resource outweighing all others by an infinite factor is individual initiative. As long as the individual is sacrificed to the collective, as is the purpose of government, we are doomed.

There are many volcanic eruptions which begin in the months of May and June. There must be a reference on this subject somewhere, with the possible reason being the warming of the hemisphere as it rotates at its closest to the sun, allowing sediments within the earth's crust mobility.