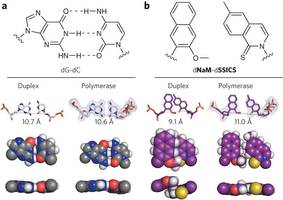 It took fifty years, but DNA work is now breaking through the threshold of engineering fresh synthetic DNA that can be used to augment the natural genomes themselves. We will have to get it right, but there is plenty of evidence out there that this is very possible and has been achieved once already by humanity. The interesting question may be to determine just how much of the human genome itself was artificially modified when we began populating the Earth as agricultural man.


It may be possible to winkle out some small pockets of humanity as yet uncrossed with the modern genome, although I suspect that that is a hopeless proposition.


I have posted in the past that the ET of a large number of UFO encounters appear to be approximately what a human modified for space would look like. ET is able to have reasonable mobility in our gravity well but can not be called upon for the heavy lifting Earth demands.


When mankind decides to populate habitats in space, it will be appropriate to produce a space modified human being to do so.


An international team of researchers discovered that the body's copying machine for DNA works in the same way for manmade, artificial building blocks of DNA as it does for the natural kind.


If scientists find artificial DNA building blocks work well and are safe to use, the extra building materials could create DNA that codes for new molecules that the body can't make now. The artificial DNA could also form the basis of a partly synthetic organism.


The DNA code in living things is made of four different molecules, called bases, that are nicknamed A, T, C and G. In a double row of DNA, the bases always link up to each other in a specific way, with A's matching with T's and C's matching with G's. In 2008, a team of researchers created a third, artificial pair of DNA molecules made to match with each other, named NaM and 5SICS. In this new study, some of the same researchers used a technique called X-ray crystallography to take pictures of A, T, C, G, NaM and 5SICS while they were getting copied in a test tube.


Many candidate unnatural DNA base pairs have been developed, but some of the best-replicated pairs adopt intercalated structures in free DNA that are difficult to reconcile with known mechanisms of polymerase recognition. Here we present crystal structures of KlenTaq DNA polymerase at different stages of replication for one such pair, dNaM-d5SICS, and show that efficient replication results from the polymerase itself, inducing the required natural-like structure.


In the future, artificial DNA building blocks like NaM and 5SICS could expand the well-known "A, C, G, T" vocabulary of DNA, according to a statement from the Scripps Institute. Synthetic bases may work even if they aren't shaped like natural bases, as long as they have flexible chemical bonds, the way NaM and 5SICS do.


Romesberg, Malyshev and their colleagues are now working on tweaking NaM and 5SICS so that natural DNA strands with those synthetic bases added will copy even more efficiently, at a rate that's closer to the rate found in all-natural DNA, they wrote in their paper. Once they accomplish that, they can start building synthetic organisms from the ground up. "If we can get this new base pair to replicate with high efficiency and fidelity in vivo [i.e., in a living organism], we'll have a semi-synthetic organism," Romesberg said.