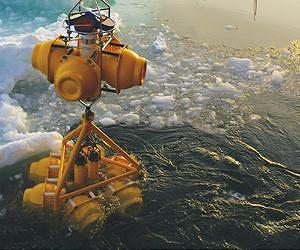 This is a pretty extraordinary claim and it may well be a primary climate driver. The waxing and waning of the density factor is on the time scales that appears to be rapid enough to explain the long cycle changes that can be seen in the climatic record.


I was looking for a switch able to produce a thousand year cycle. This is actually a good candidate. It certainly appears up to the forty year cycle that we see in the hurricane record.


It certainly not a marginal effect that is dragooned into explaining some pet theory.


What we do know for certain in relation to climate change is that a major volcano or a cascade of volcanoes can have a devastating impact on the global climate and bring temperatures down sharply.


So far there is little in global warming to get alarmed about except to note that we are presently lucky.


Deploying a mooring carrying a suite of monitoring sensors into the sea ice. Credit: Steve Rintoul.


Comparing detailed measurements taken during the Australian Antarctic program's 2012 SouthernOcean marine science voyage to historical data dating back to 1970, scientists estimate there has been as much as a 60 per cent reduction in the volume of Antarctic Bottom Water, the cold dense water that drives global ocean currents.


In an intensive and arduous 25-day observing program, temperature and salinity samples were collected at 77 sites between Antarctica and Fremantle. Such ship transects provide the only means to detect changes in the deep ocean.


The new measurements, which have not yet been published, suggest the densest waters in the world ocean are gradually disappearing and being replaced by less dense waters.


"The amount of dense Antarctic Bottom Water has contracted each time we've measured it since the 1970s," said Dr Steve Rintoul, of CSIRO and the Antarctic Climate and Ecosystems CRC. "There is now only about 40 per cent as much dense water present as observed in 1970."


The ocean profiles also show that the dense water formed around Antarctica has become less saline since 1970.


"It's a clear signal to us that the oceans are responding rapidly to variations in climate in polar regions. The sinking of dense water around Antarctica is part of a global pattern of ocean currents that has a strong influence on climate, so evidence that these waters are changing is important," Dr Rintoul said.


The research was carried out by more than 50 scientists on the AustralianAntarctic Division's research and resupply vessel Aurora Australis, which sailed to Commonwealth Bay, west along the Antarctic coast, and returned into Fremantle.


"Not only will this research improve our understanding of ocean currents, but will also feed into our knowledge of how the Southern Ocean and the Antarctic continent drives the world's climate processes," Dr Gales said.


Dr Rintoul was Chief Scientist on the recent voyage and has made a dozen voyages to the Southern Ocean. "When we speak of global warming, we really mean ocean warming: more than 90 per cent of the extra heat energy stored by the earth over the last 50 years has gone into warming up the ocean.


The Southern Ocean is particularly important because it stores more heat and carbon dioxide released by human activities than any other region, and so helps to slow the rate of climate change" Dr Rintoul said. "A key goal of our work is to determine if the Southern Ocean will continue to play this role in the future."


The causes of the observed changes in the Southern Ocean are not yet fully understood. Changes in winds, sea ice, precipitation, or melt of floating glacial ice around the edge of Antarctica may be responsible. Data collected on the latest voyage will help unravel this mystery.


A major challenge is the lack of observations at high latitude, where much of the ocean is covered by sea ice in winter. During the voyage scientists deployed nine drifting profilers, called Argo floats, which will transmit profiles of temperature and salinity every 10 days for the next five years. These ice-capable floats in the seasonal ice zone in the Australian sector of the Southern Ocean are funded through Australia's Integrated Marine Observing System.


"The Argo floats have revolutionised our ability to measure the ocean, particularly in winter when ship observations are very rare," said Dr Rintoul. "On this voyage, we deployed a new kind of float designed to survive encounters with the sea ice. These floats will allow us to see how dense water forms in winter for the first time."


The Aurora Australis visited Commonwealth Bay as part of a celebration of the centenary of Sir Douglas Mawson's Australian Antarctic Expedition. Dr Rintoul's team had the opportunity to repeat oceanographic measurements made by Mawson's team 100 years ago, obtaining one of the few century-long records obtained anywhere in the ocean.


"Our measurements collected in 2012 are quite different to those collected by Mawson in 1912," Dr Rintoul said. "This is an indication of a change inthe ocean currents that may be related to a reduction in the amount of dense water formed near Antarctica."


"Mawson's expedition really marked the transition from the "Heroic Age" of Antarctic exploration to a period where science was the primary motivation for Antarctic expeditions. I think he would have gotten a real kick out of the idea that measurements made by his team a century ago are still useful and that Australian scientists are continuing his legacy by studying Antarctica and its connection to the rest of the globe."