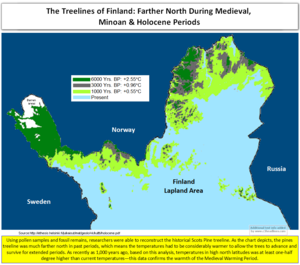 We already know this, but it is nice to see it clearly confirmed in a way that it cannot be challenged. More importantly, this work tackles the period between 6000 BP through 9000 BP. This is important because it is during this era that human agriculture rolled out but also were most still lived an existence of hunting and gathering. It is only 6000 BP that metal work emerged at all.


If we presume that the core event over the past 6000 years has been goat driven desertification, then we have Holocene A which is approximately one degree warmer than Holocene B which has proven far more susceptible to volcanic cooling events.


The take home is that Anthropomorphic Global Cooling (AGC) is likely real and it would be nice to correct it.


This can be done by the simple expedient of reforesting the Sahara in particular and similarly for the whole Middle East. We have covered this topic at length in this blog.


This would end the excessive loss of heat into space over these regions and convert the captured heat into the climate itself. 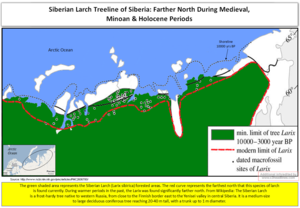 Read here. Another study, another nail in the “unprecedented” AGW coffin. New scientific research keeps refuting the claims of IPCC and chicken-little pundits. The empirical evidence is robustly overwhelming: global temperatures were warmer thousands of years ago despite low CO2 levels.


Now, a new study reveals that the northern treeline in Rocky Mountains was at a much higher altitude from six to nine thousand years ago, which confirms the extra warm climate was not just limited to the Finland/Siberia areas.


“…finds that the elevation of the treeline in the Rocky Mountains of Wyoming was higher than the present from approximately 9000 to 6000 years ago, indicating the climate was warmer during that period as compared to present temperatures. The paper adds to thousands of others indicating that the current warming period is not unprecedented; nor unusual compared to natural warming in the past.” [Scott Mensing, Thomas Minckley, Robert Musselman 2012: The Holocene]


Conclusions: The global warming science facts are often inconvenient - Earth was warmer in the past versus modern temperatures. The empirical evidence refutes claims that our current climate is on "unprecedented" warmth. In addition, the empirical evidence well establishes that warmer  climates of the past occurred during periods of low atmospheric CO2. Climate doomsday scientists can take solace that they will be able to continue to predict climate catastrophe without ever being held accountable.