The Science of Illusion 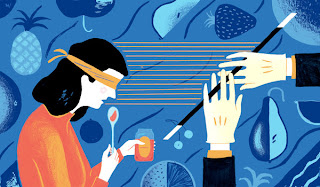 Just in case you really trust your senses, along comes this. The warning here though is that several forms of distractions will cause your brain to serious errors. Thus briefly observed phenomena are rather dangerous which we knew. Yet the interruption needs to be brief to properly realize the effect and the observer quite unaware also. A questioning mind will want confirmation which eliminates the confusion.

Whenever is see a report of a bizarre event, I want to see plenty of time. Yesterday I reported on a remarkable UFO sighting in which the observer had five full minutes to inspect a complex tableau. That becomes pretty solid. She had time to form questions and make conclusions. Her coworkers were limited to a quick image of the craft retreating and are consistent with the majority of such stories.

This reminds me that in order to see, the mind must be prepared. If a strange artifact confounds, it disappears into storage. In this way 10,000 Minoan artifacts from the European Bronze Age located from the copper mines of Lake Superior remain in storage since the 1920's while scholars claim a lack of evidence.

Even more confounding evidence is out there.

The Science of Illusion

You’ve just performed what magicians call a retention vanish: a false transfer that exploits a lag in the brain’s perception of motion, called persistence of vision. When done right, the spectator will actually see the coin in the left palm for a split second after the hands separate.

This bizarre afterimage results from the fact that visual neurons don’t stop firing once a given stimulus (here, the coin) is no longer present. As a result, our perception of reality lags behind reality by about one one-hundredth of a second.

Magicians have long used such cognitive biases to their advantage, and in recent years scientists have been following in their footsteps, borrowing techniques from the conjurer’s playbook in an effort not to mystify people but to study them. Magic may seem an unlikely tool, but it’s already yielded several widely cited results. Consider the work on choice blindness — people’s lack of awareness when evaluating the results of their decisions.

In one study, shoppers in a blind taste test of two types of jam were asked to choose the one they preferred. They were then given a second taste from the jar they picked. Unbeknown to them, the researchers swapped the flavors before the second spoonful. The containers were two-way jars, lidded at both ends and rigged with a secret compartment that held the other jam on the opposite side — a principle that’s been used to bisect countless showgirls. This seems like the sort of thing that wouldn’t scan, yet most people failed to notice that they were tasting the wrong jam, even when the two flavors were fairly dissimilar, like grapefruit and cinnamon-apple.

In a related experiment, volunteers were shown a pair of female faces and asked which they found more attractive. Then they were given a closer look at their putative selection. In fact, the researchers swapped the selection for the “less attractive” face. Again, this bit of fraud flew by most people. Not only that, when pressed to justify their choices, the duped victims concocted remarkably detailed post hoc justifications.

Such tricks suggest that we are often blind to the results of our own decisions. Once a choice is made, our minds tend to rewrite history in a way that flatters our volition, a fact magicians have exploited for centuries. “If you are given a choice, you believe you have acted freely,” said Teller, of the duo Penn and Teller, to Smithsonian magazine. “This is one of the darkest of all psychological secrets.”

Another dark psychological secret magicians routinely take advantage of is known as change blindness — the failure to detect changes in consecutive scenes. One of the most beautiful demonstrations is an experiment conducted by the psychologist Daniel Simons in which he had an experimenter stop random strangers on the street and ask for directions.

Midway through the conversation, a pair of confederates walked between them and blocked the stranger’s view, and the experimenter switched places with one of the stooges. Moments later, the stranger was talking to a completely different person — yet strange as it may sound, most didn’t notice.
What are the neural correlates of these cognitive hiccups? One possible answer comes from studies of the so-called face test, in which a volunteer is shown two faces in quick succession. Normally, just about anyone can distinguish the faces provided they’re shown within about half a second. But if the person is distracted by a task like counting, or by a flashing light, the faces start to look the same.

Here’s where it gets interesting, though. Scientists have found a way to induce change blindness, with a machine called a transcranial magnetic stimulator, which uses amagnetic field to disrupt localized brain regions. In one experiment, a T.M.S. was used to scramble the parietal cortex, which controls attention. Subjects were then given the face test. With the machine turned off, they did fine. But when the T.M.S. was on, most failed the test. Conclusion? Misdirection paralyzes part of your cortex.

Such blind spots confirm what many philosophers have long suspected: reality and our perception of it are incommensurate to a far greater degree than is often believed. For all its apparent fidelity, the movie in our heads is a “Rashomon” narrative pieced together from inconsistent and unreliable bits of information. It is, to a certain extent, an illusion.

Alex Stone is the author of “Fooling Houdini: Magicians, Mentalists, Math Geeks and the Hidden Powers of the Mind.”