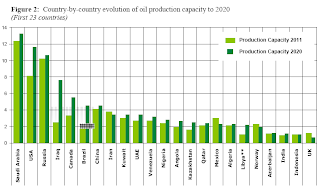 The unimagined release of tight oil into the global economy ends permanently the era of producer dominance. North America is first out the gate and will dominate the market simply because their governments take so small a share. Even at present consumption rates North America will now easily be come totally self sufficient. That is why we are turning pipelines around.

This also means that the US balance of payments will quickly reverse its long time deficit. Thus the USA economy can be expected to become a perceived powerhouse once again.

The housing and credit collapse is been corrected the hard way, but this reversal in the oil industry will go a long way to doing what the government shirked.

Oil: The Next Revolution, The Unprecedented Upsurge of Oil Production Capacity and What it means for the World. (86 pages) The figure is an all oil liquids prediction (which includes crude oil, natural gas liquids, biofuels etc...).

The natural endowment of the initial American shale play, Bakken/Three Forks (a tight oil formation) in North Dakota and Montana, could become a big Persian Gulf producing country within the United States. But the country has more than twenty big shale oil formations, especially the Eagle Ford Shale, where the recent boom is revealing a hydrocarbon endowment comparable to that of the Bakken Shale. Most of U.S. shale and tight oil are profitable at a price of oil (WTI) ranging from $50 to $65 per barrel, thus making them sufficiently resilient to a significant downturn of oil prices.


The combined additional, unrestricted liquid production from the aggregate shale/tight oil formations examined in this paper could reach 6.6 mbd by 2020, in addition to another 1 mbd of new conventional production. However, there remain obstacles that could significantly reduce the U.S. shale output: among them, the inadequate U.S. oil transportation system, the country’s refining structure, the amount of associated natural gas produced with shale oil, and environmental doubts about hydraulic fracturing, one of the key technologies for extracting oil from shale. After considering risk factors and the depletion of currently producing oilfields, the U.S. could see its production capacity increase by 3.5 mbd. Thus, the U.S. could produce 11.6 mbd of crude oil and NGLs by 2020, making the country the second largest oil producer in the world after Saudi Arabia. Adding biofuels to this figure, the overall U.S. liquid capacity could exceed 13 mbd, representing about 65 percent of its current consumption.


The analysis in this paper is subject to a significant margin of error, depending on several circumstances that extend beyond the risks in each project or country. In particular, a new worldwide recession, a drastic retraction of the Chinese economy, or a sudden resolution of the major political tensions affecting a big oil producer could trigger a major downturn or even a collapse of the price of oil, i.e. a fall of oil prices below $70 per barrel (Brent crude).

A hypothetical oil price downturn would have a significant impact, albeit short-lived, if it occurred before most of the projects considered in this paper had advanced significantly - that is, before 2015.

Conversely, if an oil price collapse were to occur after 2015, a prolonged phase of overproduction could take place, because production capacity would have already expanded and production costs would have decreased as expected, unless oil demand were to grow at a sustained yearly rate of at least 1.6 percent for the entire decade.

The opposite could also happen. A sudden rebound of the world economy could strain the equilibrium of oil demand and supply, particularly if accompanied by geopolitical tensions.

A new world-wide economic recession, a drastic change in Chinese consumption patterns, or a sudden solution to major political tensions affecting a major oil producer (such as Iran), could trigger a major decrease and even a collapse of the price of oil. By collapse, I mean a fall below $50 per barrel for one year.