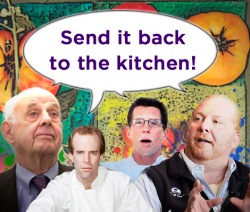 It is really simple. The subsidy game which started out to help the family farm has over three generations morphed into guaranteed government finance for large agribusiness. Quite simply the banks do not wish to lend to an independent operator if they can lent to a government based stream of income. With that reality, the best strategy is to keep buying farms to acquire more government money.


The result is obviously stupid and has driven the depopulation of the farming industry of owner operators and a rising reliance on underpaid illegal immigrants.


This group of citizens are stepping up to scream because they know that quality is been driven out by subsidized industrialized food that generally inferior.


Mario Batali, Dan Barber, Rick Bayless, and Alice Waters have had it with our food system. These well-known chefs — along with a group of 70 food movement celebrities, including Michael Pollan, Will Allen, Laurie David, Robert Kenner, and Wendell Berry — have set down their sauté pans for just long enough to sign onto a letter asking Congress to invest in healthy food.


It’s a timely statement by this star-powered group, as the Senate Agriculture Committee’s draft of the 2012 Farm Bill — a package of federal farm and food legislation representing nearly a trillion dollars — looks like it could finally hit the Senate floor this week.


And they have a point. As we’ve reported in the past, the Senate draft probably won’t improve the big picture of the food landscape as-is. In the draft, farm conservation efforts and nutrition assistance both face deep cuts, while the industrial farm lobbies have ensured that the biggest commodity farms continue to rake in subsidy payments. (Don’t believe me? Take a look at this graphic, which ran with Sunday’s New York Times op-ed on the subject. It shows that a full 76 percent of the subsidy dollars distributed between 1995 and 2010 went to a mere 10 percent of the nation’s farms.)


The letter signed by Batali, Waters, and co. was initiated by the Environmental Working Group (EWG) and describes the Senate bill as “falling far short of the reforms needed to come to grips with the nation’s critical food and farming challenges.” The letter continues:


It is also seriously out of step with the nation’s priorities and what the American public expects and wants from our food and farm policy. In a national poll last year, 78 percent said making nutritious and healthy foods more affordable and accessible should be a top priority in the farm bill. Members of the U.S. Council of Mayors and the National League of Cities have both echoed this sentiment in recent statements calling for a healthy food and farm bill.


Instead, the bill “would spend billions to guarantee income for the most profitable farm businesses in the country” in the form of unlimited crop insurance. These subsidies, it reads, “will encourage growers to plow up fragile areas and intensify fencerow-to-fencerow cultivation of environmentally sensitive land, erasing decades of conservation gains.” As an alternative, the letter points to a recent report by the Government Accountability Office that suggests shifting more of the cost of crop insurance premiums over to big commodity farmers — a move the EWG says could save as much as $2 billion. This money, they add, should:


… go to provide full funding for conservation and nutrition assistance programs and strengthen initiatives that support local and healthy food, organic agriculture and beginning and disadvantaged farmers. These investments could save billions in the long run by protecting valuable water and soil resources, creating jobs and supporting foods necessary for a healthy and balanced diet.


Indeed, these are important suggestions. And they’re more in-line with the hopes many food reformers who’ve signed on probably had for this year’s farm bill — the optimism that many activists held onto as the 2008 bill came to a close and they started looking ahead to this one. Of course all that was before last fall’s Secret Farm Bill negotiations, which kicked the process into gear within the private offices of a handful of lawmakers, and kept it insulated from many of the loudest voices in the good food movement.


If the Senate chooses to listen to the requests put forth in the letter, it may be driven to support whatever progressive amendments appear once it hits the floor. This one, for example, was announced yesterday from Sen. Kirsten Gillibrand (D-N.Y.) and would restore funding for proposed SNAP (“food stamps”) cuts by reducing federal subsidies for crop insurance companies.


The dark clouds over the process


Of course, it’s a little hard to get excited about efforts to improve on the Senate draft, with the sounds of ultra-conservative Tea Party groups — the same groups that killed House Speaker John Boehner’s (R-Ohio) highway bill earlier this spring — sharpening their knives in the next room.


As we’ve been reporting for the last few months, the Senate’s draft of the bill is a comparatively moderate approach in today’s polarized political landscape. And if Tea Party groups like Heritage Action and Club for Growth have their way, there may be no new farm bill this year at all. The GOP-controlled House Agriculture Committee has yet to produce a draft of the bill, but when they do, they’ve already announced that they intend to annihilate SNAP. Its efforts mirror a more general budget bill by the House that would cut the benefits of a whopping 1.8 million Americans and cut free school lunch for 280,000 children. (To make matters worse, the House has apparently not even put the farm bill on its summer agenda.)


A recent blog entry on The Hill called “Conservatives target farm bill” doesn’t paint a promising picture either. It reads:


Conservative groups have made it official — they hate the Senate farm bill and will push Tea Party fiscal hawks in Congress to defeat it.


Heritage Action and Club for Growth on Tuesday told The Hill they will “key vote” the Senate farm bill that is coming up for passage in early June, punishing members on their annual scorecards for voting in favor of the bill.


All that said, it’s always worth pushing for the change you hope to see while there’s still a chance to make a difference — especially when it so clearly reflects the will of so many Americans, like this fight to reform the food system does. If nothing else, the EWG’s letter does project a united front within the movement, and that’s something we may need even more of in the months and years ahead.


Update: Clare Leschin-Hoar reports over at Take Part that the EWG letter will soon be complemented by a Kickstarter effort “to raise approximately $100,000 to place a one page advertisement in the Washington Post to further promote awareness of the bill’s importance, and to pressure lawmakers to listen to constituents over the interests of ‘big ag’.” Stay tuned.
Posted by arclein at 12:00 AM