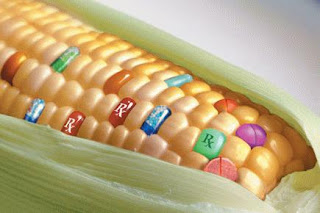 This trip in managing nature appears to be having a shorter lifespan than anyone ever expected. It also suggests that other GM products will emerge as just as vulnerable. This will at the least accelerate the conversion of industrial farming to the organic protocol, now recognized and proven to be superior.

If greater productivity is needed, then we are also looking at a new economic accommodation that allows higher manpower.

To put this is the clearest possible terms. If a thousand acre field is managed as a simple grain crop, the gross from that field may be $200,000 through $500,000 for one operator. That same land can be used to support specialty crops and value added processing to see an income approaching many times that for a number of families. Even a back of the envelope gives me fifty families and $5,000,000 gross.

Farming got a bad name because it was the last refuge of labor exploitation of which we still retain vestiges today. A regulatory regime easily overcomes that as well as an internal economy which the modern computer makes easy.

Let us make it simple. Raspberries need to be picked by hand. A proper field can be efficiently picked at the rate of ten pounds per hour. No more and no less either. Thus the task itself has an inherent base wage cost of around $0.70 to $1.00 per pound. The grower needs as much to run those fields. Thus a modest wholesale and retail margin tells us that the selling price needs to be over $2.00. Until a decade ago, minimum wage protection was not available for farm workers in BC and prices reflected just that. There is always a low ball import price that can be used to justify all that. With minimum wage established everyone adjusted knowing the field was now level and prices do reflect the new regime.

Of course raspberries are lousy travelers and rapid delivery to market is critical. Surplus goes quickly to processing. It is still a compelling example.

Friday, June 22, 2012 by: Tony Isaacs
(NaturalNews) Corn genetically engineered by Monsanto to kill western corn rootworm is reportedly being devoured by those pests with a vengeance. Thanks to heavy reliance on the genetically modified (GM) crops, the tiny rootworm pest has overtaken fields, outsmarting the genetic engineering that was supposed to keep it away.

Nature fights back against GM corn

The GM corn, launched in 2003, is engineered to produce a protein, known as Cry3Bb1, derived from a bacterium known as Bacillus thuringiensis, or Bt. In theory, rootworms ingest Bt corn roots and the protein is fatal. However, recent reports indicate that pesticide-resistant rootworms are showing up weeks earlier and more voraciously than ever.


Mike Gray, a professor of entomology with the University of Illinois reported: "We're still early in the growing season, and the adults are about a month ahead of schedule," explained Gray. "I was surprised to see them - and there were a lot."

With both demand and prices high, many farmers are planting corn year after year and on more acres, increasing the possibility that resistance could develop. Typically, corn farmers have had to rotate corn crops to minimize pest pressures. But with Bt corn, many simply planted "corn on corn," year after year. Federal regulators require a 20 percent "refuge" of non-Bt corn near Bt acres, but many growers have ignored that and oversight has been lax.


The new "superbug" rootworms may lead to serious financial woes for both farmers and the rest of us, according to a letter sent to the Environmental Protection Agency (EPA) by 22 prominent scientists and corn-management experts from the U.S. Department of Agriculture and universities across the Midwestern Corn Belt. Patrick Porter, PhD, associate professor at Texas A&M University, who drafted the letter, noted that farmers are paying almost twice as much for seeds that don't live up to their promises, and are then having to resort to insecticides on top of that.


The potential result, according to Porter, is crop failure which could raise food prices at the grocery store. Porter said, "If farmers start taking damage (from) any pest, that will lower yields. That will reduce the supply of corn and increase prices." Porter also noted that when prices for corn go up, more farmers start planting corn despite the risks, and when growers shift to growing more of one crop, they grow less of other crops and those crops' prices also go up.


Adding to GM crop concerns, recent research from Canadian scientists found that pesticides used on genetically modified (GM) crops and, in some cases, the genes used to create GM crops are able to survive in our digestive tracts, move into our bloodstreams and, in the case of pregnant women, show up in their developing infants. The research contradicts repeated contentions by Monsanto and the EPA that only insects would be hurt by GM crops.