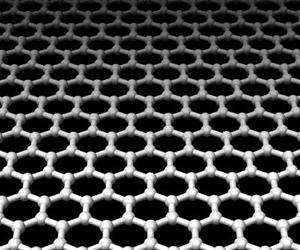 This shows us that graphene based solar cells are plausibly simple to create and produce. The transparency also provide additional flexibility in terms of design. One step up from this and we certainly have a commercial product.


I suspect we are close to a design revolution in solar capture architecture that will give us light efficient solar energy conversion. It has been a long wait however.


This also shows us that graphene work continues to advance rapidly and astonishingly, no serious impediments have arose to stall us. The next five years will see all this flow into the market place.


I notice that absolutely no one dares suggest something is impossible in terms of technology anymore. It took decades, but they are finally all cowed


Doping may be a no-no for athletes, but researchers in the University of Florida's physics department say it was key in getting unprecedented power conversion efficiency from a new graphene solar cell created in their lab.


Graphene solar cells are one of industry's great hopes for cheaper, durable solar power cells in the future. But previous attempts to use graphene, a single-atom-thick honeycomb lattice of carbon atoms, in solar cells have only managed power conversion efficiencies ranging up to 2.9 percent.


The UF team was able to achieve a record breaking 8.6 percent efficiency with their device by chemically treating, or doping, the graphene with trifluoromethanesulfonyl-amide, or TFSA. Their results are published in the current online edition of Nano Letters.


"The dopant makes the graphene film more conductive and increases the electric field potential inside the cell," said Xiaochang Miao, a graduate student in the physics department. That makes it more efficient at converting sunlight into electricity. And unlike other dopants that have been tried in the past, TFSA is stable - its effects are long lasting.


The solar cell that Miao and her co-workers created in the lab looks like a 5-mm-square window framed in gold. The window, a wafer of silicon coated with a monolayer of graphene, is where the magic happens.


Graphene and silicon, when they come together, form what is called a Schottky junction - a one-way street for electrons that when illuminated with light, acts as the power conversion zone for an entire class of solar cells. Schottky junctions are commonly formed by layering a metal on top of a semiconductor. But researchers at the UF Nanoscience Institute for Medical and Engineering Technologies discovered in 2011 that graphene, a semi-metal, made a suitable substitute for metal in creating the junction.


"Graphene, unlike conventional metals, is transparent and flexible, so it has great potential to be an important component in the kind of solar cells we hope to see incorporated into building exteriors and other materials in the future," said Arthur Hebard, distinguished professor of physics at UF and co-author on the paper.


"Showing that its power-converting capabilities can be enhanced by such a simple, inexpensive treatment bodes well for its future."


The researchers said that if graphene solar cells reach 10 percent power conversion efficiency they could be a contender in the market place, if production costs are kept low enough.


The prototype solar cell created in the UF lab was built on a rigid base of silicon, which is not considered an economical material for mass production. But Hebard said that he sees real possibilities for combining the use of doped graphene with less expensive, more flexible substrates like the polymer sheets currently under development in research laboratories around the world.
Posted by arclein at 12:00 AM