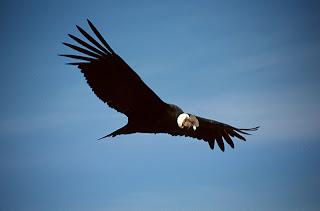 I am now pretty certain that the thunder bird observed particularly in the Eastern USA is either an Andean Condor or a close cousin. Recall the Therodon with a 21 foot wingspan is part of this family and its continued existence has to be considered. We can list some noteworthy aspects of the evidence addressed to date.

1 The bird is black although juveniles will be grey. More importantly and consistently, a white collar is observed which also conforms to the Condor’s plumage.

2 The beak is not mentioned in sightings. The small Condor beak is not noteworthy at all and it is creditable that an observer would overlook it. This bothered me until I saw a condor photograph.

3 The head lacks feathers and the expectation is for a pink skin tone. However we have photographs in which the skin color is grey. Thus such a head could go unremarked when an observer had too little time.

4 The assumption that the bird is reliant on high ground is only that. We have plenty of evidence that the bird is able to roost on the ground while protected by large evergreens in particular. In practice, such a strategy is superior to other options and the bird is hardly a likely target for a carnivore.

5 It is able to launch vertically from cover which is unexpected but this has been observed. In fact its nimbleness is surprising.

6 It is nocturnal and is quite able to spot downers and other carcasses. It commonly hunts at night and likely feeds exclusively at night although they have been spotted feeding in daylight.

7 They are responsible for the cattle mutilation phenomena although not responsible for the actual killing of the cattle. Their effective range and small beak pretty well clinches it. They would also land directly on the carcass and concentrate on soft tissue with no expectation of completing the meal. A more common scenario would be the harvesting of road kill which would be more the scale of any meal attempted.

8 They will snatch small prey of the ground up to a weight approaching seventy pounds. It has been observed struggling with a seventy pound victim that it was forced to give up. This is certainly good enough for dogs and coyotes.

9 The creature itself likely weighs as much as seventy pounds which pretty well anticipates a wing lifting capacity of easily twice that.

10 We are seeing breeding pairs as often as not implying that they also hunt in pairs. Nests could easily be established on the ground in the skirts of a large conifer in particular. Obviously the bird chooses locales remote from human activity of any sort making discovery very unlikely.

Other large flying creatures appear to be out there all operating in the night besides this particular one. However, this appears to be the one most often observed.
Posted by arclein at 12:01 AM

Hello, I find this very interesting. What sources do you have for the last few, such as numbers 5--10? I have not been able to find information that would suggest that they would mutilate cattle in the manner described. In captivity, they can attack a live rabbit, and are also capable of removing the skin. Yet, typically, with live hoofed mammals, they would first attack the eyes or tongue. In Puerto Rico, there were similar sightings in 1995, yet some of the animals found mutilated had been kept in enclosures.

Condors were temporarily released in California from 1988-92, but I do not have anything that might show that they followed this pattern of attacking livestock, especially because those individuals released were unusually receptive to being around civilized areas.

I agree and also disagree with four. What carnivore will target an adult condor? You may want to download Monsterquest: Birdzilla on Youtbue.com and listen to Mike Wallace of the San Diego Zoological Society discussing condors. Dr. Wallace, probably more than any person I can presume, has worked extensively with Andean Condors, so it is surprising for him to say that they require mountain air for soaring, when it is understood that they, and many vultures in general, typically use warm thermals, morse, and AC is also a species of lower elevations and coasts.

I do not agree with ten because I have a different view, that the birds sighted N of S. America are vagrants.

Eight is wrong. The prolonged basal phalanx of the second toe prevents them from gripping or clutching. Where did you find this? If it was struggling with a seventy-pound victim, you might be referring to what is the one exception in its abilities--the Lawndale, Illinois sighting in 1977. I am working on my disseminating my own theory as to what happened in that case, and I do believe that the witnesses were truthful. If you like, I can forward this when it is complete.

Nine is little better than eight. Maximum weight of AC is 33 lbs. It is actually their lightweightedness that is to their advantage, and a heavier bird would have more difficulty in soaring.

this is very helpful.

My reference is to other carnivores rather than the condor itself.

the assumption of mountain air is just and certainly can be dismissed as simply wrong.


that they would eyes and tongue on a live animal is actual confirmation of the validity of the conjecture and it is no reach to assume a focus on soft tissues on a downer.

what is missing is more reports on tracks.

they could well be vagrants, except that it will be no trick to set up and establish themselves and thus they plausibly have.

Weight was an outright guess and meant to be aggressive. I do think that bigger is possible but 33 is a pretty good weight anyway.

Yes i will want to see a copy of your work and i will help disseminate it.