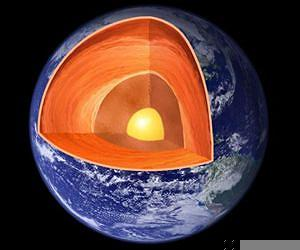 What this tells us is that the heat content of the crust declines to a tipping point were the natural sinks no longer rapidly sponge up all available oxygen. One can safely presume life processes were long since forming oxygen.


Thus we can predict a similar genesis for Venus as its crust cools, or any other planet for that matter that share our characteristics. Thus the prospects for living planets is generally excellent. With Venus we presently have a super dense atmosphere of CO2 and surely plenty of both oxygen and carbon tied up in the crust itself.


Impacting the planet with water bearing comets would speed the surface temperature drop and speed things up although plate tectonics is not yet underway there as far as we can see. We could be really wrong about that however, and what may be missing is significant mountain building


Geological record shows air up there came from below


The influence of the ground beneath us on the air around us could be greater than scientists had previously thought, according to new research that links the long-ago proliferation of oxygen in Earth's atmosphere to a sudden change in the inner workings of our planet.


Princeton University researchers report in the journal Nature that rocks preserved in the Earth's crust reveal that a steep decline in the intensity of melting within the planet's mantle - the hot, heat-transferring rock layer between the crust and molten outer core - brought about ideal conditions for the period known as the Great Oxygenation Event (GOE) that occurred roughly 2.5 billion years ago.


During the GOE - which may have lasted up to 900 million years - oxygen levels in the atmosphere exploded and eventually gave rise to our present atmosphere.


Blair Schoene, a Princeton assistant professor of geosciences, and lead author C. Brenhin Keller, a Princeton geosciences doctoral student, compiled a database of more than 70,000 geological samples to construct a 4-billion-year geochemical timeline. Their analysis uncovered a sharp drop in mantle melting 2.5 billion years ago that coincides with existing rock evidence of atmospheric changes related to the GOE.


Based on this correlation, the researchers suggest in Nature that diminished melting in the mantle decreased the depth of melting in the Earth's crust, which in turn reduced the output of reactive, iron oxide-based volcanic gases into the atmosphere. A lower concentration of these gases - which react with and remove oxygen from the atmosphere - allowed free oxygen molecules to proliferate.


The Princeton research offers the strongest data-driven correlation yet between deep Earth processes and the GOE, Schoene said. Previous hypotheses are largely based on qualitative observations of the rock record and computational models that simulate how this rapid oxygenation might have occurred. The Princeton research, however, is based on a statistical analysis of the geologic record and the chemical traces of deep-Earth activity it has preserved, Schoene said.


"The perspective behind past efforts to connect geologic processes to the Great Oxygenation Event has been hypothetical, saying that 'If the Earth had been X, there would have been reaction Y,'" Schoene said. "But these ideas cannot be tested experimentally because they are largely notional. In our paper, we have the evidence to say, 'The Earth was like this,' and then propose a hypothesis that can be tested by examining the same rich database of mantle and deep-crust changes we used in our work."


A change in subsurface activity around the time of the GOE has been noted before, Keller explained. But evidence of that shift is geochemically subtle, especially after billions of years. The database he and Schoene created allowed them to show more precisely how the geochemical makeup of the crust changed through time, resulting in a more detailed hypotheses about how this would affect the atmosphere, Keller said.


"Research in this area has been largely qualitative, but with this much data, we can pick up finer features in the geologic record, particularly a level of detail related to this sudden change 2.5 billion years ago that people had not seen with such clarity before," Keller said.


A missing piece of the GOE puzzle?

Woodward Fischer, an assistant professor of geobiology at the California Institute of Technology who specializes in the GOE, said that the Princeton research could help shed more light on an important factor in Earth's oxygenation that is not well understood. Fischer is familiar with the paper but had no role in it.


The dominant theory of oxygenation is that an abundance of photosynthetic life emerged some hundreds of millions of years before the GOE and began producing oxygen via photosynthesis, Fischer said. The problem is that this output would not have been enough to overcome "sinks" that were absorbing more oxygen from the atmosphere than was being put into it. So, a lingering question is what happened to those sinks to bring about oxygenation.


Keller and Schoene show how one of the primary sinks - volcanic gases - might have suddenly been neutralized, Fischer said. The exact effect this would have had on atmospheric oxygen levels is difficult to know - even recent fluctuations are hard to gauge, he said. Nonetheless, the clear and objective data the researchers use strongly suggests that a quick reduction in volcanic gases brought about by a drop in mantle-melt intensity was an important precursor to oxygenation, Fischer said.


"This paper offers a really striking assessment of changes occurring in the solid Earth that greatly helped set the stage for one of the most marked environmental transitions in Earth history," Fischer said.


"And their methodology precludes a strong tendency that researchers, as humans invested in our work, have to look for anecdotal geological evidence and conclude based on coincidence that events co-occurring in time must have been related," Fischer said. "The statistical approach taken by the authors in this paper really lets the data shine and reveals that there were important secular changes in the way the Earth made igneous rocks, and that these changes were possibly part of an interplay between life and deep-Earth processes."


Keller and Schoene fashioned their expansive database from previously reported rock and trace element analyses, which are increasingly available through online databases. They focused on changes in the chemical composition of basalt, a byproduct of melting in the Earth's mantle.


From their examination, Keller and Schoene saw that the Earth's mantle has undergone a gradual cooling since the planet's early history, which is consistent with scientists' expectations based on heat loss at the Earth's surface. Around 2.5 billion years ago, however, the levels of compatible elements in the sampled basalt plummeted, indicating that the magnitude of melting deep in the mantle dropped off suddenly.


Keller and Schoene confirmed their findings by checking them against existing analyses of crust-level "felsic" rocks such as granite, which form when hot basalt merges with other minerals. Heightened melt activity in the mantle leads to deeper melting in the Earth's crust, and felsic rocks can indicate the intensity of mantle melting, Keller said.


The researchers conclude that when melting happens at a great depth in the crust then the concentration of the iron-oxide gases in magma increases. When emitted into the air by volcanoes, these gases bond with free oxygen and essentially remove it from the air. On the other hand, when crust melting becomes shallower, as they observed, atmospheric levels of those volcanic gases drop and free oxygen molecules can flourish.

In a broader sense, said Schoene, his and Keller's research depicts a close interaction between the Earth's geologic and biological systems that is becoming more apparent. "In science, it is becoming increasingly obvious that seemingly different systems act together and the question is how," Schoene said.


"Overall, this analysis strengthens emerging arguments that interaction between the solid Earth and biosphere are very intimate and important," he said. "This is strong evidence of how biological and geological systems might work together, and it suggests that important planetary change is not simply the result of life dragging the rest of the planet along."


Fischer of Caltech added that this interplay of systems applies to various events in the planet's history - such as mass extinctions - that are the result of multiple factors both above and below the Earth's surface. Decidedly more difficult is tracing how these events influenced one another and ultimately led to a greater planetary change, he said.


"Because of the complicated questions of how solid Earth changes lead to biological innovations, scientists now have to start thinking deeply and working across the boundaries of what have traditionally been pretty rigid subdisciplines in the Earth sciences," Fischer said.


"It's clear from research like this," he said, "that there is hay to be made by interdisciplinary efforts to connect processes and mechanisms from the solid to the fluid Earth, and to understand that interplay with an ever-evolving biology."

The Air We Breathe at TerraDaily.com
Posted by arclein at 12:00 AM