After Finding Bigfoot with Lon Strickler 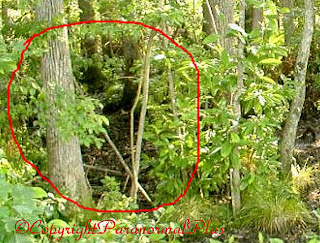 It is hardly a wonder that Lon is acting as the go to person for all strange reports when you read through this.  A clear case of a primate skeleton is effectively disappeared by government agencies with our intrepid witness on hand to observe the process first hand.

Thousands of actual first hand reports clearly establish a Bigfoot hominid population approaching 50,000 that is forest adapted, survives on game and vegetation and operates in a life way that is similar to that of the apes and other known primates.  They are nocturnal and smart enough to avoid human occupied areas.

Now we have a clear cut skeleton located with witnesses that is disappeared instead of been made available to researchers.  What possible way will odd primate remains inconvenience anyone?  It is the ‘proof’ every skeptic insists we need.  Yet now we have a clear report of evidence been shelved or worse, actually disappeared.

In the end, someone is going to have to go into the woods and track one down, shoot it and bring back the carcass.  Then we may get the resources and the expertise able to track and even capture specimens.

BFRO has done an excellent job of collecting individual reports and confirming these reports.  A real person eyeballs a witness and gets the story repeated.  We need to do the same thing with the Thunder Bird (there are way more reports out there that no one knows what to do with), the Giant Vampire Bat (Chupacabra, Cattle mutilation) and the Pterodactyl (just maybe).  While we are at it, perhaps Giant Ground Sloths and the odd Mastodon in the Southern Appalachians should be looked for just in case.  Life is persistent and cleverly avoiding mankind is hardly an unexpected adaptation.


Many of the readers of 'Phantoms and Monsters' and listeners of 'Beyond the Edge Radio' can recall my description of my 1981 encounter with a Bigfoot. If not, here are a few links:


Over the years, I have attempted to gather more information on my sighting as well as other sightings in the general area. Since my sighting in 1981 there have been two (2) more BFRO 'Class A' reports along the and another four (4) general reports and sightings in the same area from 1972-1979.


I interviewed and got to know several of the witnesses of the 1972-73 flap after my personal encounter in 1981. Many of these witnesses have since passed away. There were other unreported incidents in the general Sykesville and areas. I personally took statements to eight (8) more sightings / encounters between 1972-1979, including a home invasion on and utility shed break-in on ..both in Sykesville. There were also several chicken pens broke into up and down the South Branch of the Patapsco River including Gaither, MD - Sykesville, MD - Woodstock, MD - Daniels, MD and Ellicott City, MD. Most of the sightings have been within the ...which has a history of unusual activity throughout the park. I still live within 15 miles of all the locations.


A few years after my Bigfoot encounter I happened upon an older gentleman named Phil who was fishing on Piney Run near I had been trying out a new fly rod upstream and confronted Phil as he was packing up gear by his car. We started talking about a few odds and ends when he mentioned that skeletal remains of a large 'human' had been found on the Piney Run south bank not far from where we were standing. He said that another fisherman had chanced upon the bones while he wandered off the trail. After the discovery the man simply mentioned to a few other fisherman that there were bones in that direction as he gestured to the area.


Phil said that he and a companion walked over to the other side of the stream to take a look at the remains. He said that some of the bones were obviously missing but there was a skull without a jawbone as well as the vertebrae, a few ribs and long bones of the arms and legs. There was no visible tissue but there were a few small dessicated patches of reddish brown fur scattered around. Phil said that both he and his companion both muttered at the same time "where are the clothes?" Then Phil said "this is too big to be a human."

This was back in the early 1980's so there were no cellphones. Phil's companion walked to the small store by the bridge to call the police. As they waited for the authorities Phil took out his fish tape and measured the upper arm bone (humerus)...he remembered it measure 22 inches. Phil's observations and conclusions were that it was something similar to a large ape or gorilla. He also mentioned that the skull looked very much human but larger.


After the Police and State Police arrived on the scene everyone was advised to leave the area. In fact, Phil said they placed crime scene tape across the road so no one could get within 300 yards of the location. He said he and a few others hung around the general store by the railroad tracks so they could see who was coming and going from the scene. There were unmarked helicopters bringing people on-site as well as several unmarked vehicles. These vehicles were similar to what I had seen after my encounter.

When I had made my report with the BFRO I mentioned the finding of these remains. The investigator stated there was no record of the incident...which is the same story with my encounter. There was never any mention on the local news.


I have been searching for information for 30 years. As a result of the information I did gather from witnesses and residents I assume that there may have been a breeding population of Bigfoot in the . The most recent sighting was in 1993 by an 8 year old boy in the area...a few miles downriver from Marriotsville. There was a report filed for a sighting in 2001 at the Reservoir (witnesses thought they saw Bigfoot on frozen lake). Since the area is now heavily zoned for residential dwellings, it's obvious to me that these creature breeding units have moved on to more natural locations.


These links may be of interest:

Everything The Government Wants You To Know About Bigfoot: From The Secret Files...

This is Eddie Craiser and i just might be a bigfoot hybrid and in this picture if you look hard enough you can see me standing next to my cousin bigfoot and my mother the loch ness monster. please remove this picture because it is a very person picture and i dont want anyone to now know what i look like and rape me. thank you good sir and good day.