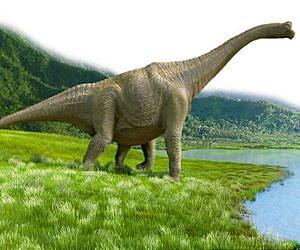 It is always good to see questions long thought answered come under review with modern methods and produce much better answers that are also clearly much more convincing.

It would be worthwhile to apply this also to sea life to discover if any differences exist.  It would also be good to apply it to Moas and chickens.

In the meantime, we are now going to be able to discuss the real weights of the long extinct with serious confidence.

Scientists have developed a new technique to accurately measure the weight and size of dinosaurs and discovered they are not as heavy as previously thought. University of Manchester biologists used lasers to measure the minimum amount of skin required to wrap around the skeletons of modern-day mammals, including reindeer, polar bears, giraffes and elephants.

They discovered that the animals had almost exactly 21% more body mass than the minimum skeletal 'skin and bone' wrap volume, and applied this to a giant Brachiosaur skeleton in Berlin's Museum fur Naturkunde.

Previous estimates of this Brachiosaur's weight have varied, with estimates as high as 80 tonnes, but the Manchester team's calculations - published in the journal Biology Letters - reduced that figure to just 23 tonnes. The team says the new technique will apply to all dinosaur weight measurements.

Lead author Dr Bill Sellers said: "One of the most important things palaeobiologists need to know about fossilised animals is how much they weighed. This is surprisingly difficult, so we have been testing a new approach. We laser scanned various large mammal skeletons, including polar bear, giraffe and elephant, and calculated the minimum wrapping volume of the main skeletal sections.

"We showed that the actual volume is reliably 21% more than this value, so we then laser scanned the Berlin Brachiosaur, Giraffatitan brancai, calculating the skin and bone wrapping volume and added 21%. We found that the giant herbivore weighed 23 tonnes, supporting the view that these animals were much lighter than traditionally thought.

Dr Sellers, based in Manchester's Faculty of Life Sciences, explained that body mass was a critical parameter used to constrain biomechanical and physiological traits of organisms.

He said: "Volumetric methods are becoming more common as techniques for estimating the body masses of fossil vertebrates but they are often accused of excessive subjective input when estimating the thickness of missing soft tissue.

"Here, we demonstrate an alternative approach where a minimum convex hull is derived mathematically from the point cloud generated by laser-scanning mounted skeletons. This has the advantage of requiring minimal user intervention and is therefore more objective and far quicker.

"We tested this method on 14 large-bodied mammalian skeletons and demonstrated that it consistently underestimated body mass by 21%. We suggest that this is a robust method of estimating body mass where a mounted skeletal reconstruction is available and demonstrate its usage to predict the body mass of one of the largest, relatively complete sauropod dinosaurs, Giraffatitan brancai, as 23,200 kg.

"The value we got for Giraffatitan is at the low range of previous estimates; although it is still huge, some of the enormous estimates of the past - 80 tonnes in 1962 - are exaggerated. Our method provides a much more accurate measure and shows dinosaurs, while still huge, are not as big as previously thought."

Explore The Early Earth at TerraDaily.com
Posted by arclein at 12:00 AM

I think the earth was smaller back in the dinosaur days. The gravity was less and movement of the massive beasts and birds were done with ease.

Neal Adams explains this theory so very well, and it makes so much sense along with the 'electric Universe' which I think is correct.