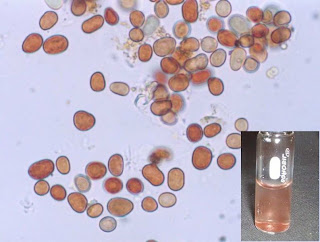 Some extraordinary lab work on the Red Rain phenomena that is completely reproducible. It is time to wake up.

First, we need to deliberately sample rainfall in selected locates and to discover anomalies. Knowing that they are possibly there is a good start.  Several other comparables are mentioned.

Secondly, the replication experiment is mind bending and needs to be intensified. Right now we are missing DNA. Why?  maybe we are not.

Thinking we may have already found it if it were resident in the stratosphere is needlessly optimistic and a thunderhead is the type of disturbance to drain material out of that environ or close enough anyway.

Right now we do not even know what we do not know because we have not seriously searched the upper atmosphere thinking we had no need to do so.

At the moment it appears we are looking at a life form that different from earth life but looks like life.  We have waited long enough on this to resolve it clearly and claims of local algae are merely convenient when you have samples to test.

From July 25 through September 23, 2001, red rain sporadically fell on the southern Indian state of Kerala. Heavy downpours occurred in which the rain was coloured red, staining clothes with an appearance similar to that of blood. Yellow, green, and black rain was also reported. Colored rain had been reported in Kerala in as early as 1896 and several times since then.


It was initially announced that the rains were coloured by fallout from a hypothetical meteor burst, but a study commissioned by the Government of India found that the rains had been coloured by airborne spores from a locally prolific terrestrial alga. Other explanations were proposed but not until early 2006 did the colored rains of Kerala gain widespread attention in the popular media. A controversial conjecture that the colored particles were extraterrestrial cells was proposed by Godfrey Louis and Santhosh Kumar of the Mahatma Gandhi University in Kottayam.


For years, claims circulated that red rain which fell in India in 2001, contained cells unlike any found on Earth. Newer evidence that these cells can reproduce was published by MIT in the Technology Review.

While this is certainly not a mainstream idea in science, a growing body of evidence suggests that it should be carefully studied rather than casually disregarded.


For example, various bugs have been shown to survive for months or even years in the harsh conditions of space. And one of the more interesting but lesser known facts about the Mars meteorite that some scientists believe holds evidence of life on Mars, is that its interior never rose above 50 degrees centigrade, despite being blasted from the Martian surface by an meteor impact and surviving a fiery a descent through Earth's thick atmosphere.


If there is life up there, this evidence suggests that it could survive the trip to Earth.


All that seems well established. Now for the really controversial stuff.


In 2001, numerous people observed red rain falling over Kerala in the southern tip of India during a two month period. One of them was Godfrey Louis, a physicist at nearby Cochin University ofScience and Technology. Intrigued by this phenomena, Louis collected numerous samples of red rain, determined to find out what was causing the contamination, perhaps sand or dust from some distant desert.

Under a microscope, however, he found no evidence of sand or dust. Instead, the rain water was filled with red cells that look remarkably like conventional bugs on Earth. What was strange was that Louis found no evidence of DNA in these cells which would rule out most kinds of known biological cells (red blood cells are one possibility but ought to be destroyed quickly by rain water).


Louis published his results in the peer-reviewed journal Astrophysics and Space in 2006, along with the tentative suggestion that the cells could be extraterrestrial, perhaps from a comet that had disintegrated in the upper atmosphere and then seeded clouds as the cells floated down to Earth. In fact, Louis says there were reports in the region of a sonic boom-type noise at the time, which could have been caused by the disintegration of an object in the upper atmosphere.


Since then, Louis has continued to study the cells with an international team including Chandra Wickramasinghe from the University of Cardiff in the UK and one of the leading proponents of the panspermia theory, which he developed in the latter half of the 20th century with the remarkable physicist Fred Hoyle.


Louis, Wickramasinghe and others published some extraordinary claims about these red cells. They say that the cells clearly reproduce at a temperature of 121 degrees C. "Under these conditions daughter cells appear within the original mother cells and the number of cells in the samples increases with length of exposure to 121 degrees C," they say. By contrast, the cells are inert at room temperature.


That makes them highly unusual, to say the least. The spores of some extremophiles can survive these kinds of temperatures and then reproduce at lower temperatures but nothing behaves like this at these temperatures, as far as we know.


This is an extraordinary claim that will need to be independently verified before it will be more broadly accepted.

And of course, this behaviour does not suggest an extraterrestrial origin for these cells, by any means.

However, Wickramasinghe and company can't resist hinting at such an exotic explanation. They've examined the way these fluoresce when bombarded with light and say it is remarkably similar to various unexplained emission spectra seen in various parts of the galaxy. One such place is the Red Rectangle, a cloud of dust and gas around a young star in the Monocerous constellation.

It would be fair to say that more evidence will be required before Kerala's red rain can be satisfactorily explained. In the meantime, it looks a fascinating mystery.


Wickramasinghe and Hoyle have also used their data to argue in favor of intelligent design, and propose that the first life on Earth began in space, spreading through the universe via Panspermia, and that evolution on earth is influenced by a steady influx of viruses arriving via comets.


NOTE: The 'Red Rain of Southern India' anomaly remains amystery. The living cells in the rain had strange properties and some considered it extraterrestrial. Conventional wisdom suggests that it was nothing more than a type of red algae...though it could not be proven either way. Panspermia is the idea that life exists throughout the universe in comets, asteroids and interstellar dust clouds and that life of Earth was seeded from one or more of these sources. Panspermia holds that we are all extraterrestrials. The Panspermia Theoryis valid in my opinion but I'm not sure it comes into play in this case...Lon