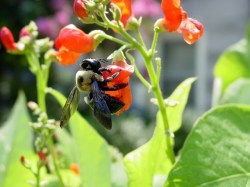 In practice our insect population has been under general assault for around sixty years and what should be noted is that we like to apply product in and around our specific husbandry schedules. That means two things. We bring in pollinators at targeted times and then remove them allowing the second problem of aggressive application outside the pollination window.

When that happens natural weeds will still draw in the wild pollinators and the pollinators are facing a long open season on themselves.

What is now missing is a population review of the real workhorses out there which are rather small wasps. Bumble bees never were dense enough on the ground to do the full job as would be expected. Anyone who has picked berries in the field will observe ample small wasps at work looking rather like miniature bees. And by the way, no one wants a large population of bumble bees because they do sting and sting hard.

The real take home is that it is becoming pressing to convert all modern agriculture over to so called organic methods and to get used to buying a better quality product. All these populations can readily recover.

Bye bye bumblebee: Honeybees aren’t the only pollinators in danger

Not so long ago, it was difficult to venture outdoors anywhere on the East Coast without encountering therusty-patched bumblebee.

Named for a small brown patch on their abdomens, these bumblebees have been pollinating plum, apple, alfalfa, and other crops since long before farmers came to rely so heavily on boxed and truckedEuropean honeybees.

Amid the plague of colony collapse disorder (CCD), some farmers are looking back to native pollinators like the rusty-patched bumblebee  — as well as hummingbirds and butterflies — to help ensure that the nation can continue growing food. And in the process, they’re discovering a stinging reality that researchers have known for more than a decade: Many of North America’s once-plentiful bumblebee species have all but disappeared.

The rusty-patched bumblebee and yellow-banded bumblebee have been among the hardest-hit in the nation’s east. In the west, the western bumblebee is in similar trouble.
That’s bad news for the country’s farmers and backyard gardeners, not to mention its native wildlife. In California alone, researchers reported last year in the journal Rangelands [sub. req.] that native species pollinate more than one-third of the state’s crops, making them a multi-billion-dollar contributor to its rural economy.
In another example, bumblebees are so productive in canola farming that Canadian researchers reported in 2006 that farmers could maximize their profits by converting nearly one-third of their fields to native meadowlands, which provide the highly valued insects with habitat.

Research published last year in the journal PNAS created some buzz around the bad bumblebee news. Scientists discovered that the abundance of some species has declined by as much as 96 percent over as little as two decades; their geographic range also shrunk by up to 87 percent.

“There are several species that have been in dramatic decline all across their ranges,” said Mace Vaughan, pollinator conservation program director at the Xerces Society, which seeks to protect native insects and other invertebrates. “Many of these bumblebees were the most common bees where they occurred, and today some are on the verge of extinction.”

Colony collapse disorder is clearly a critical issue, but press coverage of the honeybee calamity has almost entirely overshadowed the distressing fate of their native cousins.

The near disappearance of once-common bumblebees across the nation — and in other parts of the world — doesn’t only jeopardize our food supply. It puts into question the future of nearly every single wild plant that blooms.

Without blooming plants, our species would quickly starve and vanish. If we managed somehow to engineer our way out of extinction, we would be thrust into a world dominated by ferns, mosses, and fungi. There is nothing wrong with fern forests (they’re enchanting places), but fern fronds, moss, and mushrooms do not make for a well-rounded diet.

Aware of these potentially dire consequences, scientists are trying to root out the cause of the dramatic decline in wild bees. But unlike honeybee colony collapse (which has been tied to the widespread use of neonicotine pesticides), the cause of the bumblebee apocalypse is less clear.

“At this point, we don’t have a smoking gun,” Vaughan said.

The conversion of grazing lands, prairies, and other wildflower-rich habitats into new neighborhoods, streets, and parking lots is considered a cause. Even turning such land into vineyards or orchards takes a heavy toll, because such monoculture farms fail to provide year-round sustenance for the bees.

Pesticides are also blamed. France this month joined Germany and Italy in restricting the use of neonicotinoid-based pesticides. Scientists have discovered that these poisons kill pollinators that suck at the nectar of affected plants. Conservationists and beekeepers have urged the United States and other nations to follow suit.

Yet another factor in the die-offs appears to be parasites and fungus disease. Commercial bumblebee colonies are increasingly being shipped around the nation, particularly for use in greenhouses, and Vaughan and others fear that they are spreading maladies to new habitats.

“They’re sent in the mail and come in a cardboard box,” Vaughan said. “At the end of the year the little colony dies and you throw away the bumblebees.”

And of course there is always the small matter of global warming, which is impacting habitats everywhere.

“Climate change has been a big issue that could potentially be affecting bumblebee distributions,” said Sydney Cameron, an associate entomology professor at the University of Illinois and lead author of last year’s PNAS report.

Cameron said bumblebee declines could probably not be explained by a single factor, but by the combined effects of pathogens, pesticides, habitat loss, and climate change.

“If you pick any one of these variables, you probably won’t get very far,” says Cameron. “But look at the combination.”

The bumblebee problem has gotten worse since it was detected in the late 1990s, but Vaughan says there is still a lot that can be done.

This is National Pollinator Week, and the Xerces Society is encouraging folks to plant bumblebee-friendly gardens and take other steps to help give the six-legged critters a leg up (or three). Even a window planter box can provide them with nutritious fodder.

“If every house had a nice plot with some good wildflowers for native bees then that would have a huge impact,” Vaughan said.

While honeybees live in large hives and can survive for years, most smaller bumblebee colonies die off at the end of every year. Young bumblebee queens mate in the fall and then hibernate underground in winter, emerging in the spring to start a new colony in a small dark place, such as a hole in a tree. (Hollowed-out wood, terra-cotta pots, bundles of bamboo, or small birdhouses also work). This fact sheet[PDF] produced by the Xerces Society includes instructions and suggestions for creating your own.

This is something new to me, it should be good.